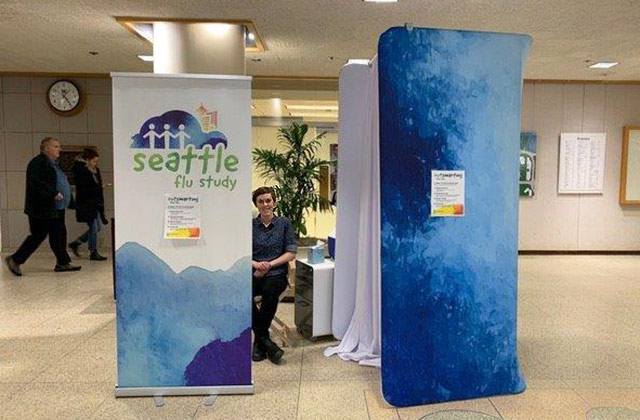 The Seattle Flu Study set up kiosks to take nasal swab samples and gather information about the spread of infectious diseases. (University of Washington Photo)Regulators have blocked the Seattle Flu Study’s guerrilla effort to trace the spread of novel coronavirus, citing ethical concerns, but leaders of the effort say they’re working out an alternate path…

Regulators have blocked the Seattle Flu Study’s guerrilla effort to trace the spread of novel coronavirus, citing ethical concerns, but leaders of the effort say they’re working out an alternate path to continue their investigation.

The Seattle Flu Study was set up last year by leaders in the biomedical community — including the Brotman Baty Institute for Precision Medicine, the University of Washington, the Fred Hutchinson Cancer Research Center and Seattle Children’s Hospital — to use genetic tools to study how influenza spreads.

When the SARS-CoV-2 coronavirus started spreading like wildfire through China and other countries, the team began analyzing the samples they were receiving for evidence of the virus’ genetic fingerprint. And when evidence was found, the results were sent onward to public health authorities for follow-up. At least one patient in Snohomish County was identified as a coronavirus case thanks to the team’s work.

By comparing the evolutionary changes in the virus’ RNA code, as reflected in Seattle Flu Study samples, epidemiologists determined that the virus had been spreading for six weeks in the United States without being detected — and that by that time, hundreds of people in the Seattle area were probably carrying the COVID-19 infection without knowing it.

Those findings arguably played a crucial role in bringing the coronavirus threat to light in the United States, at a time when public health agencies had extremely limited capability to test for the virus. There was a problem, however: The Seattle Flu Study’s coronavirus test hadn’t been cleared for clinical use by the Food and Drug Administration. Researchers had regulatory clearance to use their findings for research, but not for diagnostic purposes.

A New York Times report documented the behind-the-scenes struggle between the researchers and federal and state regulators over whether to continue analyzing the results and sharing them in a non-research setting.

As detailed in the Times, regulators argued that the Seattle Flu Study had to work out a new disclosure protocol and get it approved, while researchers argued that going through such a process would take months — using up precious time for tracking and controlling the pandemic.

In an email to GeekWire, the Seattle Flu Study didn’t take issue with the Times’ report but said it anticipated resuming its work.

“Our researchers are deeply dedicated to keeping our community safe,” University of Washington genome scientist Jay Shendure, the study’s principal investigator, explained in the email. “In the face of this unprecedented health threat, there are times when we have all felt the need to move fast in an effort to save lives.”

Shendure said researchers “are actively working and have had good cooperation with local, state, and national health authorities on the response to COVID-19.”

“Our team is productively collaborating with state regulators and has identified a path forward that will allow us to continue testing,” he said. “This collaboration will be crucial to helping us overcome the current challenge and putting in place a strong foundation for the future.”

Shendure didn’t elaborate on the details of the path forward. But another member of the study team, Fred Hutch epidemiologist Trevor Bedford, suggested in a series of tweets that the Seattle Flu Study would make use of testing data from the UW Virology Lab. That lab won emergency clearance from the FDA to start coronavirus testing just last week.

The underlying rationale for federal regulation of diagnostic assays is undisputed, but it was absolutely maddening trying to find a solution that would allow use of our high-throughput research assay for #COVID19 testing through much of Feb. 1/4https://t.co/t0MdumLHDs

Although we cannot currently test samples using our research assay, we are working productively with regulators and have a path forward that allows us to continue testing in collaboration with @UWVirology. 2/4https://t.co/2u8oWZjxd0

To be clear, I hugely value collaborations with scientists at the @CDCgov during this crisis and in previous work. The organization is staffed with incredible and hard-working individuals. However, I believe mistakes were made surrounding initial testing and case definition. 3/4

In the current crisis in Washington State, @KCPubHealth and @WADeptHealth have worked admirably, with rapid testing, dedicated contact tracing and thoughtful approaches to mitigation. I’m honored to work alongside these institutions. 4/4

The latest projections from the Seattle Flu Study estimate that roughly 1,100 people in the Seattle area have been infected with coronavirus, even though Seattle-King County Public Health has reported only 190 confirmed cases. The assumption is that many people don’t know whether they have COVID-19 because they haven’t been tested. More cases are likely to come to light as regional health officials ramp up the capability to conduct tests.

The Seattle Flu Study has projected that the number of infected people will double every six days if the spread of coronavirus is unchecked. The unsettling mathematical implications of that statistic is what’s motivating government officials to take emergency actions — such as the restrictions on public gatherings that were announced today.