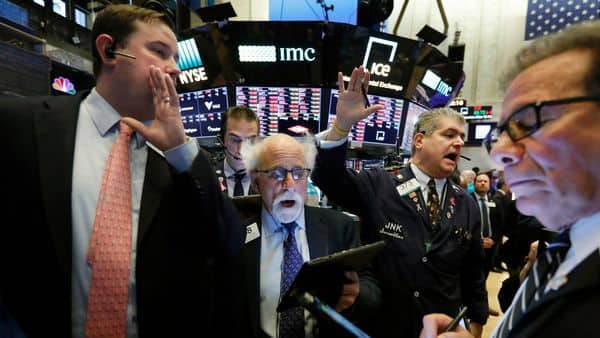 US stock indexes opened more than 2% higher as hopes of coordinated policy easing to avert a global recession calmed investor nerves a day after biggest market rout since financial crisisA few minutes into trading, Dow Jones Industrial Average stood at 24,773.66, up 3.9 percent or around 920 points.

Investors welcomed Tuesday’s reprieve but weren’t pretending this is the end to the market’s plunges, which took the S&P 500 on Monday to its worst day since the 2008 financial crisis. Stocks have had jumps even bigger than this in the past couple weeks, only for the bottom to give out again.
Nonetheless, hope was rising that the big, coordinated effort from authorities around the world that markets have been waiting for may be on the way. President Donald Trump says his administration will ask Congress for payroll tax relief and other quick measures to help protect from the spread of COVID-19, which has pushed airlines to cancel flights and prodded Italy to lock down the entire country.
In Japan, a task force set up by the prime minister on Tuesday approved a 430 billion yen ($4.1 billion) package with support for small to medium-sized businesses.
Perhaps the most notable market move Tuesday was that Treasury yields also pushed higher in a sign that fear has receded a bit, though they remain far below where they were even a week ago.
The 10-year Treasury yield rose to 0.65% from 0.49% late Monday. A week ago, it had never been below 1%.
The S&P 500 was up 2.5%, as of 9:52 a.m. Eastern time. It recovered about a third of its loss from the day before.
The Dow Jones Industrial Average rose 658 points, or 2.8%, to 24,513, and the Nasdaq composite was up 2.6%.
Brent crude, the international standard, rose $2.96, or 8.6%, to $37.32 per barrel, while benchmark U.S. crude rose $2.53 to $33.66. Oil prices plunged 25% on Monday amid a price war between producers, who are pulling more oil out of the ground even though demand is falling due to the virus.
For most people, the new coronavirus causes only mild or moderate symptoms, such as fever and cough. For some, especially older adults and people with existing health problems, it can cause more severe illness, including pneumonia.
The vast majority of people recover from the new virus. According to the World Health Organization, people with mild illness recover in about two weeks, while those with more severe illness may take three to six weeks to recover. In mainland China, where the virus first exploded, more than 80,000 people have been diagnosed and more than 58,000 have so far recovered.
Because the virus is new and experts can’t say for sure how far it will ultimately spread, investors are worried about the worst-case scenario for corporate profits and the economy. That’s why many say the market will continue to swing sharply at least until the number of new cases decelerates.