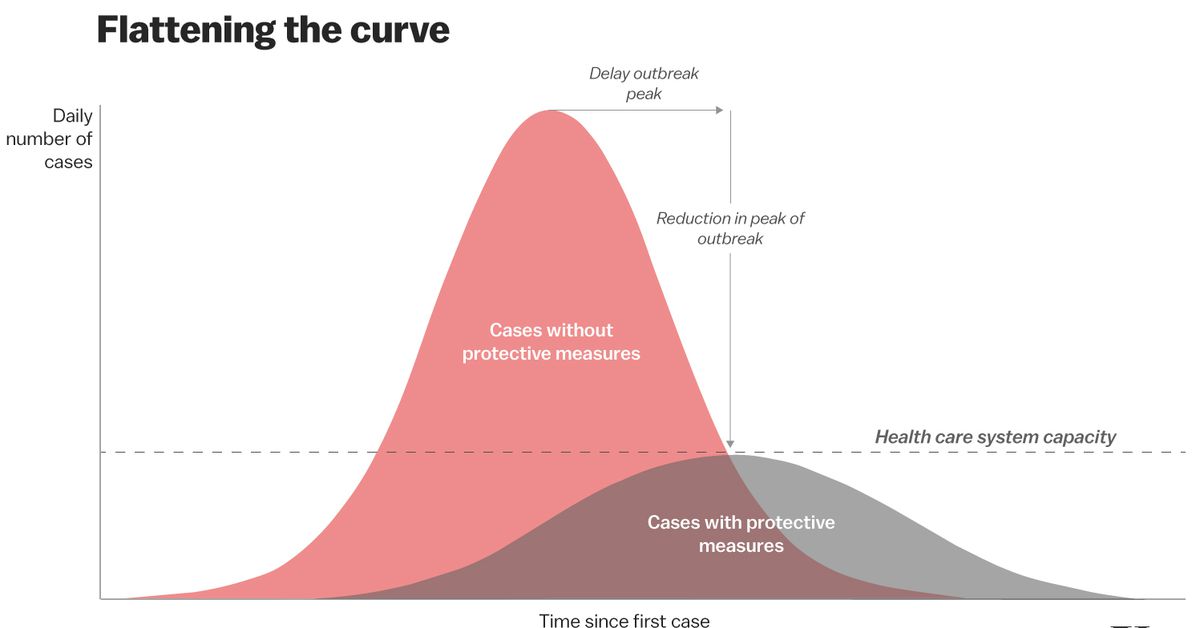 The main uncertainty in the coronavirus outbreak in the United States now is how big it will get, and how fast. In the past few days, we’ve seen cases jump dramatically; as of March 10, there were more than 700 confirmed cases and at least 26 deaths. The Centers for Disease Control and Prevention’s Nancy…

The main uncertainty in the coronavirus outbreak in the United States now is how big it will get, and how fast. In the past few days, we’ve seen cases jump dramatically; as of March 10, there were more than 700 confirmed cases and at least 26 deaths. The Centers for Disease Control and Prevention’s Nancy Messonnier told reporters Monday, “many people in the US will at some point, either this year or next, get exposed to this virus.”

According to infectious disease epidemiologist Marc Lipsitch at Harvard, it’s “plausible” that 20 to 60 percent of adults will be infected with Covid-19 disease. So far, 80 percent of cases globally have been mild, but if the case fatality rate is around 1 percent (which several experts say it may be), a scenario is possible of tens or hundreds of thousands of deaths in the US alone.

Yet the speed at which the outbreak plays out matters hugely for its consequences. What epidemiologists fear most is the health care system becoming overwhelmed by a sudden explosion of illness that requires more people to be hospitalized than it can handle. In that scenario, more people will die because there won’t be enough hospital beds or ventilators to keep them alive.

Epidemiologists call this strategy of preventing a huge spike in cases “flattening the curve,” and it looks like this:

“Even if you don’t reduce total cases, slowing down the rate of an epidemic can be critical,” wrote Carl Bergstrom, a biologist at the University of Washington in a Twitter thread praising the graphic, which was first created by the CDC, adapted by consultant Drew Harris, and popularized by the Economist. The chart has since gone viral with the help of the hashtag #FlattenTheCurve.

Flattening the curve means that all the social distancing measures now being deployed in places like Italy and South Korea, and on a smaller scale in places like Seattle and Santa Clara County, California, aren’t so much about preventing illness but rather slowing down the rate at which people get sick.

On Thursday, the CDC posted new guidance for people over age 60 and people with chronic medical conditions — the two groups considered most vulnerable to severe pneumonia from Covid-19 — to “avoid crowds as much as possible.”

“If more of us do that, we will slow the spread of the disease,” Emily Landon, an infectious disease specialist and hospital epidemiologist at the University of Chicago Medicine, told Vox. “That means my mom and your mom will have a hospital bed if they need it.”

So even if you’re young and healthy, it’s your job to follow social distancing measures to avoid spreading it to others, and keep the epidemic in slow motion. “The more young and healthy people are sick at the same time, the more old people will be sick, and the more pressure there will be on the health care system,” said Landon.

Hospitals filled with Covid-19 patients won’t just strain to care for those patients — doctors may also have to prioritize them over others. “Right now there’s always a doctor available when you need one, but that may not be the case if we’re not careful,” says Landon.

Staying home helps prevent the US health system from being overloaded

At this point, with the virus spreading in America, the top priority is making sure the health care system avoids being flooded with very sick patients who need ventilators and intensive care.

“From a US standpoint, you want to prevent any place from becoming the next Wuhan,” says Tom Frieden, who led the CDC under President Barack Obama. “What that means is even if we’re not able to prevent widespread transmission, we want to prevent explosive transmission and anything that overwhelms the health care system.”

Remember, America’s hospitals and doctors are already dealing with their usual caseloads during a pretty bad flu season. Now they have to be ready to handle any Covid-19 patients who come their way.

There are serious concerns about the US system’s capacity to handle a severe outbreak. Covid-19 is a respiratory illness and in its most serious stages can require patients with pneumonia to be put on a ventilator. But there might not be enough ventilators to meet that need if the outbreak becomes too widespread.

The maximum number of ventilators that could be put in the field in the United States is about 160,000. So under those scenarios, there would theoretically be enough capacity to meet the need.

But if the coronavirus outbreak gets worse, we could quickly run out. In a situation more similar to the Spanish flu pandemic (675,000 dead in the US), about 742,500 people in the United States would require ventilation, according to government estimates. We don’t have that many.

The health system is much more than ventilators, of course, and the concerns about capacity apply to the rest of it, too. As HuffPost’s Jonathan Cohn reported, US hospitals have about 45,000 beds in their intensive care units. In a moderate outbreak, about 200,000 patients may need to be put in the ICU, but under a more severe outbreak, it could be nearly 3 million.

And while all 3 million of them would likely not need treatment at the same time, we again need to account for the ICU patients hospitals already had before coronavirus arrived, as Cohn noted:

On the one hand, those are total numbers, for the duration of the epidemic. Even under the most dire scenario, it’s unlikely that 2.9 million people would need ICU beds all at once. On the other hand, ICU beds in the U.S. are already pretty full, thanks to the normal crush of patients with influenza and other major medical problems.

As a result, hospitals are routinely at capacity, forcing backups of patients “boarding” in emergency departments for hours or even days, waiting on the beds there until inpatient slots become available. And that’s before any influx from COVID-19.

Hospitals are already doing what they can — rationing surgical masks, preparing to stand up temporary facilities, etc. — and they will take more extreme measures if they can’t handle all the people with Covid-19 plus their more routine patients.

But one thing people can do to help is stay home if they are feeling unwell and especially if they received a formal Covid-19 diagnosis and advice to self-quarantine. That way, the US health care system can focus on the patients who really need it during this outbreak.