Skip to content
Mirror Desk 9 months ago 3 min read
Given the high-voltage buildup to the summit clash of ICC women's T20 World Cup, the end turned out to be quite an anti-climax for India. After their stupendous show in the group league stage, where they won all their matches, Harmanpreet Kaur & Co were outclassed in all three departments by the Australians. TOI takes…

Given the high-voltage buildup to the summit clash of ICC women’s T20 World Cup, the end turned out to be quite an anti-climax for India.

After their stupendous show in the group league stage, where they won all their matches, Harmanpreet Kaur & Co were outclassed in all three departments by the Australians.

TOI takes a look at the five key moments of the final:

The relatively inexperienced Indian girls appeared to be overawed by the occasion and crumbled under pressure applied by the two Australian openers. Off-spinner Deepti Sharma, who bowled the first over, dished a juicy full toss that was dispatched to the boundary by Alyssa Healy. Deepti followed it up with two more as she struggled to hit the right length. Beth Mooney also joined the party and Deepti ended up conceding 14 runs in front of a record 86,174 spectators at the Melbourne Cricket Ground (MCG). Indian bowlers lacked variations on a placid pitch. . Pacer Shikha Pandey leaked 23 runs in the 11th over with Healy smacking three sixes. Star leg-spinner Poonam Yadav, who had picked up a 4-wicket haul vs Aussies in the first match, was ineffective too. Indian girls had bowled and fielded well in the run-up to the final, but on Sunday, they let themselves down with poor catching and sloppy ground fielding. Healy was handed an early reprieve when she was dropped at short cover by Shafali Verma on the fifth ball of the innings. She took the match away from there with a hard-hitting 75. Mooney too survived a dropped chance when on eight as left-arm spinner Rajeshwari Gayakwad spilled a return catch in the fourth over. Healy and Mooney added 115 runs for the opening wicket to virtually seal India’s fate.

India’s two batting mainstays – Smriti Mandhana and Harmanpreet Kaur – capped a miserable campaign with another round of failures. India’s batting remained a concern. After a forced 8-day break before the final, Indians looked rusty and were reduced to 30/4 inside the Power Play as Shafali (2), Jemimah Rodrigues (0), Mandhana (11) and Harmanpreet (4) were back in the hut. The dramatic collapse ended the match as a contest and it was left to Deepti (33) and Richa Ghosh (18) – substituting for a concussed Taniya Bhatia – to delay the end. Veda Krishnamurthy (19) also failed to live up to her finisher tag. 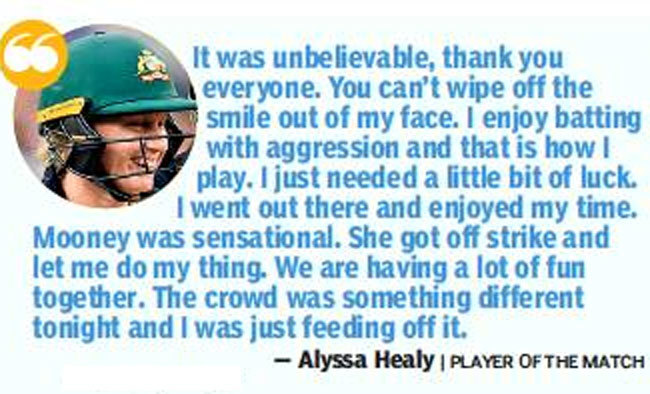 Most captains prefer to bat first in big games, especially a final as it takes the pressure off the team. Australian captain Meg Lanning did her team a big favour by winning the toss and choosing to bat. Australians piled on the pressure by rattling up 184/4. It was only the second time that India were chasing a target in the tournament. They failed miserably and folded up for 99 and lost the game by a whopping 85 runs. 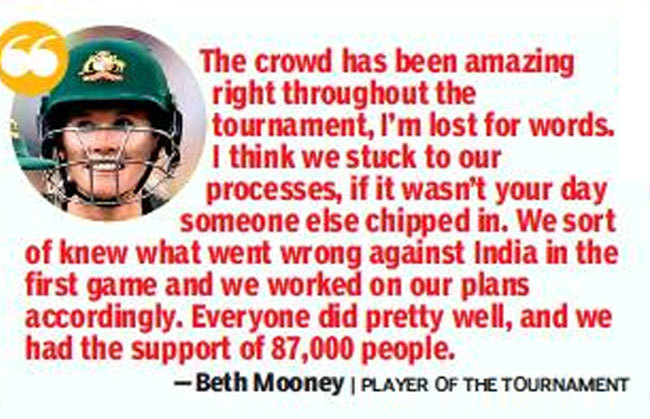 END OF THE SHAFALI SHOW

The inexperience of young Shafali Verma, who scored 161 runs in the four league matches, was exposed by pacer Schutt, who used the short ball to good effect. Shafali was undone by the bounce as she nicked one to the keeper. At 16 years and 40 days, Shafali on Sunday, became the youngest to in any World Cup final and was easily the ‘find’ of the tournament. 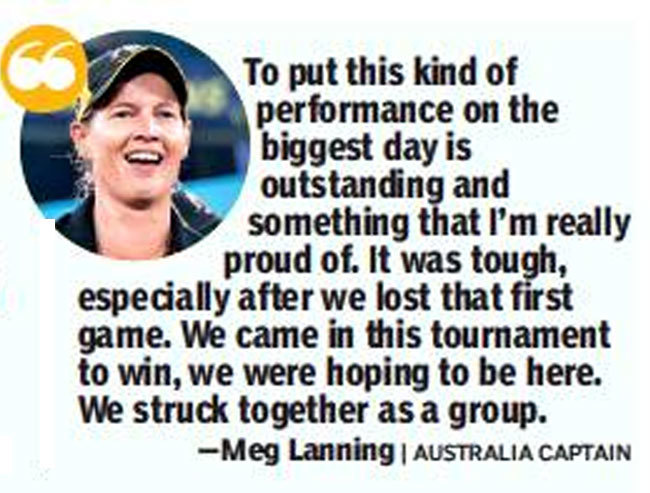