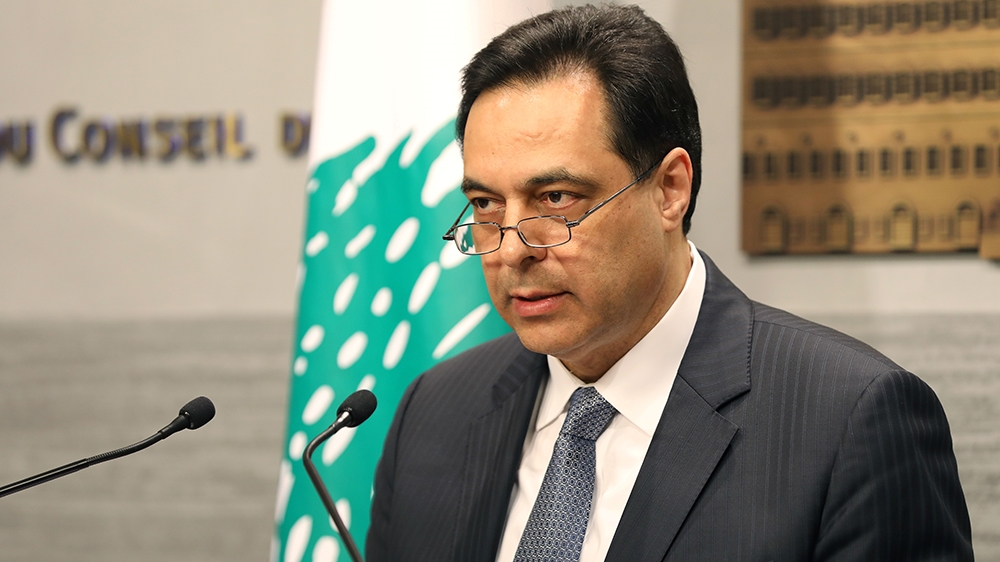 Beirut, Lebanon - Lebanese Prime Minister Hassan Diab announced on Saturday that Beirut will not repay a $1.2bn Eurobond due next week and will instead seek to restructure its massive debt as the country's dollar reserves dwindle amid an acute financial crisis. In a televised address to the nation, Diab said the "difficult decision" to…

Beirut, Lebanon – Lebanese Prime Minister Hassan Diab announced on Saturday that Beirut will not repay a $1.2bn Eurobond due next week and will instead seek to restructure its massive debt as the country’s dollar reserves dwindle amid an acute financial crisis.

In a televised address to the nation, Diab said the “difficult decision” to default for the first time in Lebanon’s history had been made in order to “secure the basic needs for people”.

Lebanon is in the throes of an economic meltdown rooted in corruption, government mismanagement, a decrepit power sector that bleeds billions from state coffers and the civil war next door in Syria.

The Lebanese pound has devalued sharply against the US dollar on parallel markets, while banks have imposed informal capital controls limiting the amount of dollars depositors can withdraw as well as transfers abroad.

As inflation soars and confidence plummets, businesses are closing and people are being thrown out of work.

The decision to default on the country’s debt – which Diab put at $90bn or 170 percent of economic output – was taken unanimously by the cabinet at a meeting earlier in the day, and was backed by the country’s political and financial establishment.

President Michel Aoun, Speaker Nabih Berri, Central Bank Governor Riad Salameh and the head of the Association of Lebanese Banks, Salim Sfeir, as well a Diab himself, met on Saturday morning and announced in a joint statement that they would stand by any decision the government makes on debt repayment – except if that decision is to pay the debt.

Diab said Lebanon will now look to enter into negotiations with creditors.

Lebanese banks, which hold the majority of the country’s debt, had been against default and had dumped Eurobonds to foreign buyers in recent weeks as the likelihood of default grew, weakening the government’s negotiating position.

Diab said the government also planned to restructure Lebanon’s banking sector – a former pillar of the economy which through its sheer size had discouraged investment in more productive sectors.

Lebanon produces little and imports about 80 percent of the goods it consumes.

“We do not need a banking sector that is four times the size of our economy,” he said.

He also pledged to establish a safety net for the poorest and protect the savings of small depositors amid harsh capital controls by banks that have limited withdrawals of foreign currency to just a few hundred dollars per month.

The Lebanese pound, pegged to the dollar since 1997, was previously used interchangeably with the US greenback, but has depreciated in value by more than 60 percent since November on parallel markets.

Seeking to stop the pound’s rapid downward spiral, Lebanon’s Central Bank on Friday ordered exchange shops – the backbone of the parallel market – to cap the exchange rate at 30 percent above the official rate of 1,500 Lebanese pounds to $1.

Mohammad Faour, a commentator on Lebanese economics and postdoctoral researcher in finance at the Michael Smurfit Graduate Business School in Ireland, said the decision to restructure Lebanon’s debt was “inevitable”.

“It was only a matter of time since we are paying off debt from dwindling reserves while barely getting any new dollars into the system,” Faour told Al Jazeera. “The sooner you acknowledge that reality and work based on that, the better. All options are really bad, but this is the least worst option available.”

Lebanon is staring down the barrel of about $4.6bn in debt repayments this year, while central bank reserves are estimated to be approximately $30bn.

Debt servicing has eaten up 30 percent of recent budgets, amounting to $68bn in the past 20 years, according to research by Wael Atallah, a commentator on the Lebanese economy.

Now, Faour said the government must commit to a comprehensive, credible economic plan that can assure both the general population and creditors of the path forward.

From the point of view of creditors, Faour said such a plan would benefit from the involvement of the International Monetary Fund (IMF). However, there is stiff opposition to IMF involvement in Lebanon, both from the general public and from Hezbollah, the dominant force in the country’s politics.

So far, the government has sought technical assistance from the IMF but has not moved towards accepting any official plan, which would likely include a series of unpopular austerity measures like tax hikes and cuts in subsidies.

Lebanon can expect tough negotiations with creditors over rescheduling its debt, some of which has been bought at deep discounts by so-called “vulture funds” that may seek to take the country to court to force it to repay the full face value.

Some commentators have warned that Lebanon’s assets abroad could be threatened with seizure, including planes belonging to its national carrier, Middle East Airlines, and gold reserves in the United States.

Instead, he said, the most difficult part would be how to deal with local banks who hold the lion’s share of the country’s debt – debt that now is unlikely to be repaid. “We should be bracing ourselves for some banks, or most banks, closing for a while because much of their assets could be wiped out from a default, and they have to readjust.”

Capital controls – which Diab said would soon be formally regulated – could consequently be expected to remain in place for about five years in a process that banks and large depositors can expect to be a “painful exercise”, Faour added.

This means that increasingly angry anti-establishment demonstrations that have been going for nearly five months, and are directed increasingly against banks, will likely not cease.

On Saturday, several protests took place across the country, including in Beirut, southern Sidon and Tyre, Zouk Mosbeh and northern Tripoli.