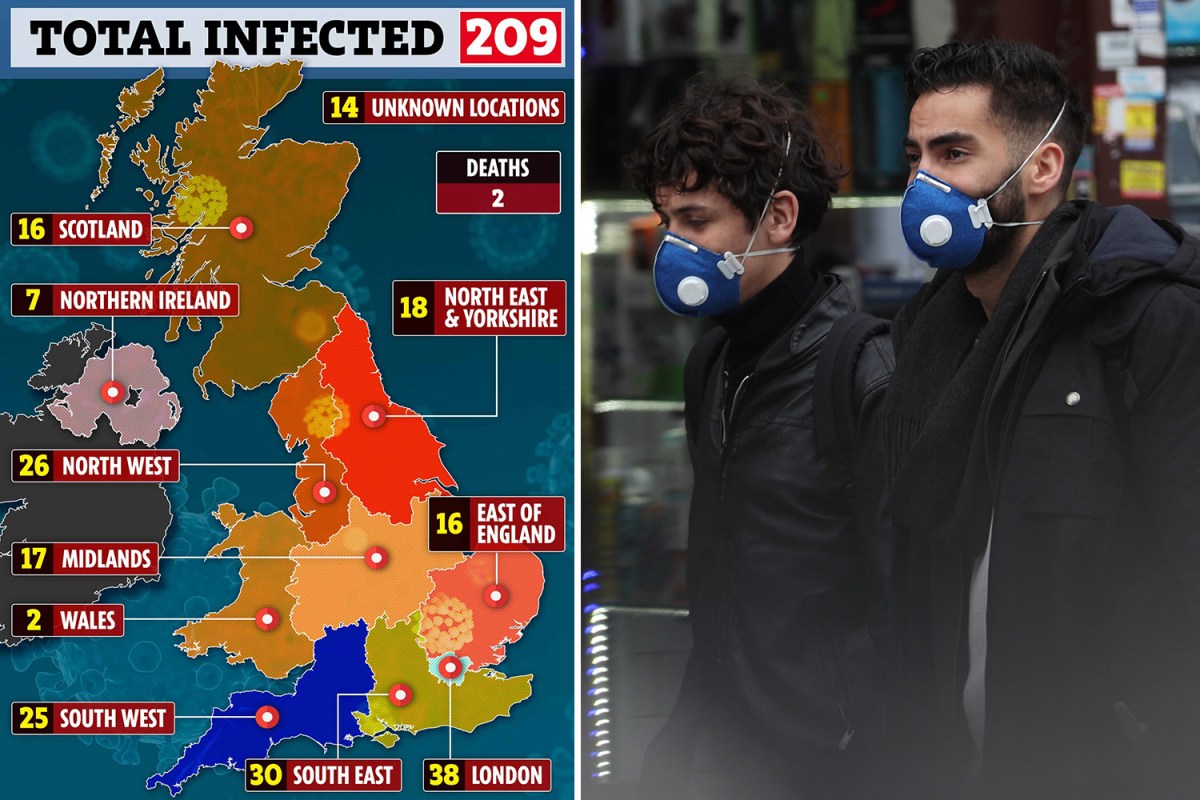 MINISTERS have warned local councils to brace themselves for a coronavirus death toll of 100,000, it has been reported. Whitehall officials have given the 'central estimate' after medical experts are expected to recommend the government move into its second 'delay' phase to tackle the deadly bug. ⚠️ Read our coronavirus live blog for the latest news…

MINISTERS have warned local councils to brace themselves for a coronavirus death toll of 100,000, it has been reported.

Whitehall officials have given the ‘central estimate’ after medical experts are expected to recommend the government move into its second ‘delay’ phase to tackle the deadly bug.

According to the Sunday Times, the figure was revised after an initial death toll of 500,000 was given if 80% of the population was infected.

The total was circulated to town hall leaders to prevent panic and included those most likely to die from seasonal flu, which average 17,000 over the past five years.

One official who has been involved in the planning said: “The central estimate of deaths is about 100,000.

“Everyone has been focusing on the worst case but this is what the experts actually expect to happen. Some of those people would have died of other flus.”

The Prime Minister is set to head an emergency cobra meeting on Monday which will discuss further precautions to halt the spread of the killer bug.

According to the Guardian, the government will outline plans to bring doctors out of retirement as well as encouraging people to work from home.

The government is trying to prepare the public without causing widespread concern, with ministers already nervous about the effect on the economy from extensive disruption.

Speaking ahead of Wednesday’s Mr Hammond said the government needed to address problems in supply chains to businesses, exposed by the coronavirus.

Mr Hammond said contingency planning for a no-deal Brexit envisaged goods being “stuck on the other side of the Channel”, The Times reports.

But the risk with coronavirus is that “goods and components are not being manufactured at all because factories have closed down and shipping is disrupted”.

Mr Hammond said the spread of the disease had the potential to create a “catalyst for a tipping point in the economy”, or even push the UK into recession.

“Obviously if growth becomes negative the prospect of a recession looms,” he said.

“Growth is stronger in the UK than it is in quite a few other countries in Europe, but it’s not anywhere near as robust as we would have liked it to be going into this kind of crisis.”

He urged Chancellor Rishi Sunak create a war chest, as he did did to counter the potential effects of a no-deal Brexit, to give Mr Sunak to stimulate the economy should the coronavirus crisis escalate.

As of Saturday morning, 206 people in the UK had tested positive for coronavirus – a rise of 42 from the 164 cases which had been confirmed by Friday evening.

On Saturday evening, a further three cases were confirmed in Northern Ireland – bringing the UK total to 209.

The Department of Health said more than 21,000 people had been tested for the virus.

The alarming new rates come after an 88-year-old man yesterday became the second coronavirus death in the UK.

He had been admitted to Milton Keynes Hospital with pneumonia on March 3 and was described as “somebody older” who had “underlying health conditions”.

It is understood the pensioner had visited several countries on a dream Caribbean cruise and officials are now scrambling to contact others he had been in contact with.

His family now claim medics didn’t spot the deadly disease – and left him coughing on an open ward before his death.

The Sun Online understands 10 members of hospital staff and five patients have been put into isolation following his death.

A source said: “He was coughing excessively and another patient in the ward had complained to a nurse that should be checking him for coronavirus.

“The nurse told him not to worry about it and that he is being dealt with.”

The first death came on Thursday when a 75-year-old woman died after testing positive for Covid-19.

Health chiefs said the woman had been suffering underlying health conditions and was ‘in and out of hospital’ before passing away at Royal Berkshire Hospital in Reading.

Britain is now bracing itself for more deaths as ministers draw up drastic “delay” measures – including potentially axing events and closing schools – to prevent the spread.

The government yesterday revealed a £46m emergency package to help find a coronavirus vaccine and develop a faster test for the virus.

But there are fears the disease could peak around Easter and last for six months – with millions set to be infected.

Sir Patrick Vallance, Chief Scientific Adviser to the Government, warned Britain was at the start of an outbreak.

He said: “We have cases across Europe, across the world, this is a global epidemic and we would expect to see more cases in the UK.

“We’ve got a reasonable worst-case scenario… that involves 80 per cent of the population and we think the mortality rate is one per cent or lower. I expect it to be less than that.

Up until now most cases were in clusters around people who had travelled back to the UK from aboard.

But now – with the rate of cases rocketing – the outbreak from person to person in communities has taken hold.

Two British Airways baggage handlers working at Heathrow Airport are among the new positive tests, sparking fears over how many items of luggage they handled while carrying the virus.

A ward at Watford General Hospital was evacuated after a patient was confirmed to be infected with COVID-19.

Meanwhile, a child at Alder Hey Children’s Hospital in Liverpool has tested positive for coronavirus.

The patient is one of at least three children in the UK to have become infected with the deadly bug.

Last week, a pupil at Churston Ferrers Grammar School in Torbay, Devon, was diagnosed after returning from holiday in northern Italy.

Deadly coronavirus can be spread by using paper money

Coronavirus could force thousands of small businesses to go bust

A pupil at Kingston Academy school in Surrey also tested positive after returning to the UK from a foreign trip.

Elderly patients are the most vulnerable to the virus, with mortality rates of around nine per cent – one in every 11 people – recorded so far in people aged over 80.

In children and adults aged under 30 the mortality rate plummets to fewer than one in every 500 cases.