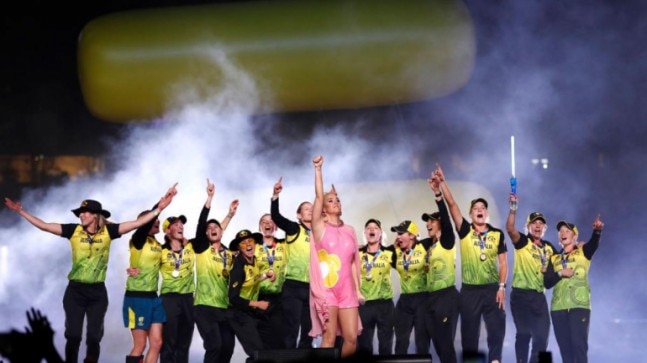 Australia defeated India by 85 runs in a completely one-sided final to clinch their fifth T20 World Cup title at the Melbourne Cricket Ground on Sunday. Katy Perry brought the T20 World Cup to a perfect ending with her amazing performance at the MCG (Getty Images)HIGHLIGHTSKaty Perry belted out some of her biggest hits after…

Australia defeated India by 85 runs in a completely one-sided final to clinch their fifth T20 World Cup title at the Melbourne Cricket Ground on Sunday.

American pop star Katy Perry set the stage on fire before the start of the Women’s T20 World Cup final and also made sure to end the tournament with a bang after the hosts beat India to lift their fifth title at the Melbourne Cricket Ground.

Meg Lanning’s girls joined Katy Perry on stage as they enthralled the capacity crowd at the G. The Southern Stars’ win also coincided with International Women’s Day which was celebrated throughout the world on Sunday.

Molly Strano and Sophie Molineux led the way on the dance floor as Katy Perry belted out some of her biggest hits for the players and the 86,174-odd fans present inside the stadium.

Former England captain Michael Vaughan even complimented the Aussie players for celebrating the win with Kary Perry, who made her first public appearance since announcing her pregnancy in a new music video last week.

Perry had also performed her hit singles ‘Roar’ and ‘Firework’ just before the start of the match.

Sadly the celebrations and pre-match fireworks proved to be more interesting than the final itself which turned out to be one-sided affair with Australia thrashing India by 85 runs to lift their fifth T20 World Cup title and second in a row.

Alyssa Healy (75) and Beth Mooney (78 not out) gave Australia the perfect start with an opening partnership of 115 runs which helped them post 184 for 4 after electing to bat first.

Megan Schutt (4 for 18) and Jess Jonassen (3 for 20) then led the way with the ball, sharing 7 wickets between themselves as Australia bowled India out for 99 in 19.1 overs.