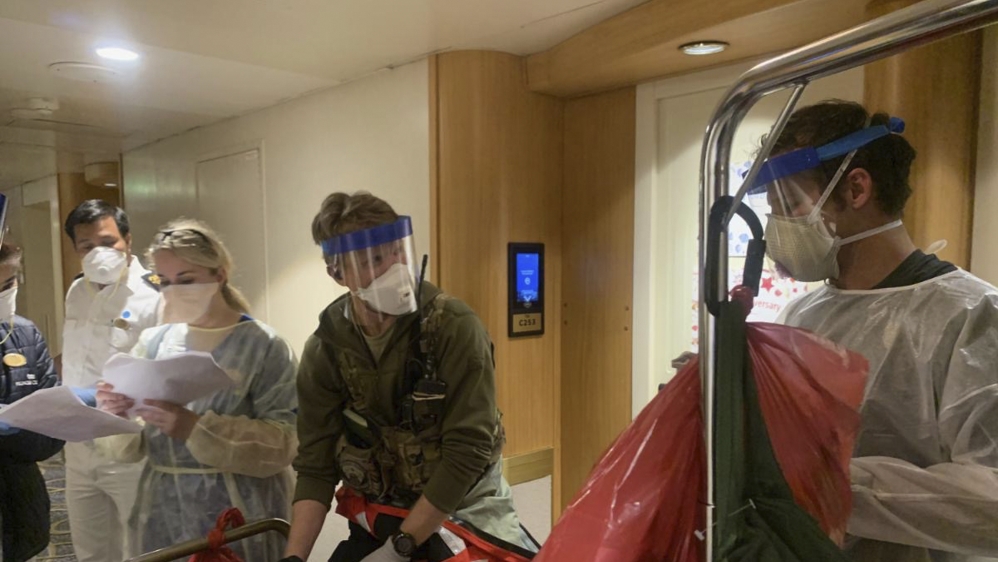 Twenty-one people have tested positive for coronavirus on board the cruise ship, Grand Princess, stranded off the coast of California, US Vice President Mike Pence announced on Friday, as the outbreak continues to spread, infecting more than 100,000 people globally. Pence said the crew members of the ship were likely exposed during two previous trips, adding that…

Twenty-one people have tested positive for coronavirus on board the cruise ship, Grand Princess, stranded off the coast of California, US Vice President Mike Pence announced on Friday, as the outbreak continues to spread, infecting more than 100,000 people globally.

Pence said the crew members of the ship were likely exposed during two previous trips, adding that he expected that an estimated 1,150 crew members would be quarantined on board the ship.

US President Donald Trump also said in a separate statement that he would rather thousands of passengers of the cruise ship also remain on board the vessel. According to the company, the ship can hold up to 2,600 passengers.

At least 17 deaths have been reported across the US due to the disease, including two cases reported by the state of Florida early on Saturday.

The Centers for Disease Control and Prevention have reported at least 164 confirmed cases, while news reports say cases have surged close to 300.

Globally, more than 100,000 people have been diagnosed with the disease, according to Johns Hopkins University – with at least 3,070 deaths in China and at least 267 fatalities in other parts of the globe, most of them in Italy and Iran.

In South Korea, authorities reported 483 new cases of infections on Saturday, bringing the total close to 7,000, according to Yonhap news agency. According to the Princess Cruises, the Grand Princess vessel, which is stranded off the coast of California, can hold up to 2,600 passengers and 1,150 crew members [California National Guard via AP]

Florida health officials has announced that two people who tested positive for the new coronavirus have died in the state.

The Florida Department of Health said the two people who died were in their 70s and had traveled overseas.

One of them was a man with underlying health issues in Santa Rosa County, in Florida’s Panhandle, according to the statement. It added that the second death was that of an elderly person in Lee County, in the Fort Myers area.

The statement did not give immediate indications of where the two had traveled.

As of Friday, Florida authorities said seven people in the state have tested positive for coronavirus.

The US State Department has raised its alert level for travel to Azerbaijan, warning Americans to reconsider travel there due to a coronavirus outbreak and response measures implemented by the country’s government.

The State Department also raised its alert level for travel to Turkmenistan due to travel restrictions and quarantine procedures instituted in response to the virus.

Neither country has reported many cases but both border Iran, which has been hard hit by the coronavirus.

The US State Department slapped a travel advisory warning on Iran last month, urging Americans not to travel there.

South Korea on Saturday reported 483 additional coronavirus cases from late on Friday, taking the national tally to 6,767, Yonhap news agency quoted the Korea Centers for Disease and Control and Prevention (KCDC) as saying.

The death toll remained unchanged at 44 from Friday, the report said.

Most of the cases of infections were traced from a religious sect in Daegu, a city of 2.5 million people. South Korea’s total reported infections – the largest number outside China, where the virus first emerged – rose to 6,767 on Saturday, the Korea Centers for Disease Control and Prevention said [Yonhap via AFP]

01:38 GMT Saturday – 2 US health screeners at LAX positive for coronavirus

Two federal health screeners at Los Angeles International Airport have tested positive for the coronavirus, according to an email sent to their colleagues late on Friday, according to a Reuters report on Saturday.

The Centers for Disease Control and Prevention employees were conducting secondary screenings of passengers arriving from overseas, including from China, and have been directed to self-quarantine until March 17, the email said.

“At this time, we cannot confirm where these two screeners were exposed,” said the email, which was sent by a senior CDC official.

“Let us keep our colleagues in our thoughts during this period.”

The American Israel Public Affairs Committee lobbying group, also known as AIPAC, reported late on Friday that two attendees of its recent conference in Washington, DC have tested positive for the coronavirus.

China’s National Health Commission reported on Saturday at least 28 new coronavirus deaths as of the end of Friday, bringing to 3,070 the death toll nationwide.

The government also reported 99 new confirmed cases on March 6, down from 143 the previous day, with a total of 80,651 cases nationwide. Most of the new cases and deaths were from Hubei, the epicentre of the outbreak in China.

Meanwhile on Friday, China’s health agency reported that at least 53,726 people have recovered and have been discharged from hospital. Chinese authorities said more than 53,000 people have recovered from coronavirus and were discharged from hospitals nationwide [Stringer/AFP]

G20 finance ministers and central bank governors on Friday pledged to take “appropriate” fiscal and monetary measures in responding to the coronavirus outbreak and to protect economic growth against shocks, according to Reuters news agency.

In a joint statement issued by G20 chair Saudi Arabia, the ministers, who met in Riyadh last month, said they welcomed measures and plans already put forward by countries to support economic activity.

“We are ready to take further actions, including fiscal and monetary measures, as appropriate, to aid in the response to the virus, support the economy during this phase and maintain the resilience of the financial system,” the group said.

A second patient in England who tested positive for coronavirus has died, the United Kingdom’s Chief Medical Officer Chris Whitty confirmed. The patient was being treated at Milton Keynes University Hospital and had underlying health conditions.

The city of Austin in the US has cancelled the March dates for SXSW, or South by Southwest, and SXSW EDU.

“We are devastated to share this news with you. ‘The show must go on’ is in our DNA, and this is the first time in 34 years that the March event will not take place. We are now working through the ramifications of this unprecedented situation,” organisers said.

The event, held in Texas, is one of the world’s biggest international music festivals and showcases talent from dozens of countries, styles and traditions.

Click here to read all the updates from March 6.