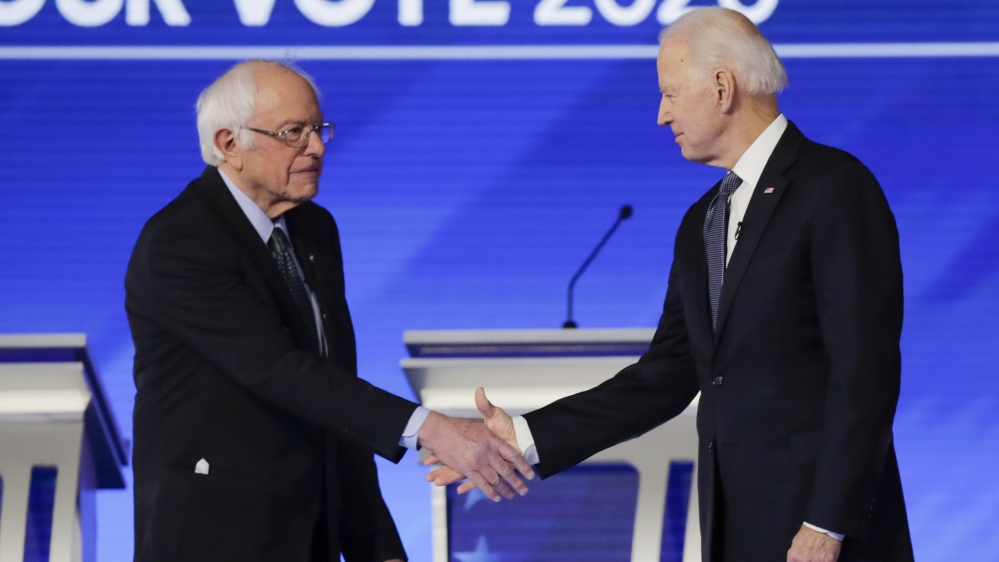 And then there were three. After a frenzied four days that completely upended the campaign for the Democratic presidential nomination, the remaining primary voters in the United States were on Wednesday left with three viable choices (down from more than 25 one year ago) for the candidate they want to face President Donald Trump in…

And then there were three.

After a frenzied four days that completely upended the campaign for the Democratic presidential nomination, the remaining primary voters in the United States were on Wednesday left with three viable choices (down from more than 25 one year ago) for the candidate they want to face President Donald Trump in the November general election – Joe Biden, Bernie Sanders or Elizabeth Warren.

After an abysmal showing on Super Tuesday, in which he managed to carry only the US territory of American Samoa, billionaire Michael Bloomberg exited the race and endorsed Biden on Wednesday morning, saying it was clear that remaining in the race would make his ultimate goal of defeating Trump more difficult.

Elizabeth Warren huddled with advisers on Wednesday to determine if there was a reason to stay in the race after her wipe-out on Tuesday. She did not win a single state and finished in third place, after Biden and Sanders, in her own home state of Massachusetts.

Hawaii Congresswoman Tulsi Gabbard, who won a delegate in the caucuses in American Samoa, is technically still in the race but currently polling at about 1 percent nationally.

While Biden won 10 of the 14 Super Tuesday states, including delegate-rich Texas and a broad swath of the South, Sanders demonstrated his strength by winning California, the nation’s biggest state.

Establishment Democrats were breathing a sigh of relief on Wednesday.

“What we faced a week ago was the moderate-progressive movement or base in Virginia splitting four ways” among Democratic contenders, said Congressman Don Beyer, a Virginia Democrat who supports Biden. “I’m really encouraged by it, and I feel much more optimistic now about being able to keep the House, take back the Senate and win the presidency.”

Sanders and his supporters showed no signs of surrender, insisting that he can energise enough young voters to drive the party to a victory in the general election.

“The American people have got to understand that this is a conflict about ideas, about a record, about a vision of how we go forward,” he said at a news conference in his hometown of Burlington, Vermont, on Wednesday.

Congresswoman Primila Jayapal, a Democrat who co-chairs the House progressive caucus and who has endorsed Sanders, said that as the race narrows to a two-person contest, Sanders will do more to reach out to black, Latino and older voters.

“For Bernie Sanders, he is going to have to figure out how to reach out to older voters and to black voters to build the kind of coalition that is now required in a two-person race, because it’s a very different race,” Jayapal said.

The Sanders campaign sees Biden a vulnerable with a number of key constituencies, Jayapal said. “Biden is not winning any Latino voters so he is going to have some challenges,” she told reporters at the US Capitol.

The Sanders-Biden race as it is now unfolding has echoes of Sanders’ face-off in 2016 against Hillary Clinton, another moderate candidate who was deemed a safer choice until her stunning loss to Trump in the general election. Unfortunately for Sanders, his path to victory in 2020 is riddled with the same stumbling blocks that tripped him up in 2016.

For one thing, the calendar of primaries ahead – Michigan, Mississippi, Missouri, Idaho, and Washington on March 10th, and Florida, Illinois and Ohio on March 17th – is dominated by states that Sanders, with a few exceptions, lost to Hillary in 2016.

Another Achilles heel for Sanders in 2016, his lack of support among black voters, was apparent in Tuesday’s results as well. Biden swept the Southern states where African-American voters make up a big chunk of the Demcratic base, garnering as much as 72 percent of the black vote in Alabama and 60 percent in Virginia, according to exit polls.

The bright spot for Sanders was the Latino vote, which he handily carried in places where it matters. In California, Sanders won 49 percent of Latino voters to Biden’s 19 percent, and in Texas he won 39 percent compared with Biden’s 26 percent.

The revolution on which Sanders has hung his candidacy, however, one that promised a surge of passionate young voters, didn’t materialize Tuesday. The turnout was there, especially in Virginia which saw record numbers at the polls, but the votes were for Biden, not Sanders.

According to exit polls conducted by Edison Research, not a single state saw an increase in young voters’ share of the electorate on Tuesday. Biden is far from running away with the race, though, and has his own baggage that will weigh him down if he wins the nomination.

At 77 years old, he is hardly the picture of youthful exuberance (Sanders is 78) and is prone to frequent gaffes at which Trump frequently pokes fun. When Biden took the stage in Los Angeles on Tuesday night to celebrate, in fact, the first thing he did was accidentally confuse his wife and sister.

Then, there is Ukraine. All-but-ignored by Trump and the Republicans when Biden was foundering, questions about his dealings, along with those of his son, Hunter, in that country have already resurfaced. On Wednesday, Republicans in the US Senate announced a new phase of their investigation into the matter, which was litigated at length during the impeachment trial of the president in January.

A remaining wildcard in the race is whether Bloomberg, who spent more than half a billion dollars of his own money on his run, will turn his massive campaign operation towards the Democrats’ larger goal of defeating Trump in November.

Biden’s deputy campaign manager Kate Bedingfield said Biden is “thrilled” to have Bloomberg’s support. But she said conversations about what Bloomberg’s endorsement means in practice are ongoing.

To secure the nomination, Sanders or Biden will need to claim 1,991 delegates, a majority of the 3,979 pledged delegates available this primary season.

Votes were still being counted Wednesday, but by most tallies, Biden had racked up 566 delegates, Sanders 501 and Warren 61. The numbers are expected to shift as new states report their numbers.