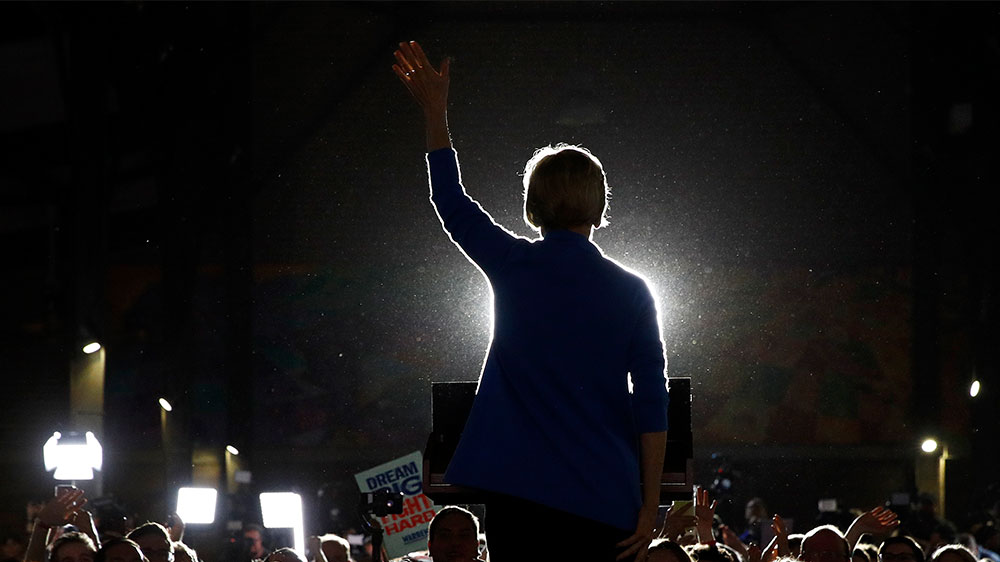 Former Democratic presidential candidate Elizabeth Warren speaks during a primary election night rally in Detroit, Michigan [File: Patrick Semansky/AP Photo] Elizabeth Warren, who electrified progressives with her "plan for everything" and strong message of economic populism, dropped out of the Democratic presidential race on Thursday, according to a person familiar with her plans. The exit…

Elizabeth Warren, who electrified progressives with her “plan for everything” and strong message of economic populism, dropped out of the Democratic presidential race on Thursday, according to a person familiar with her plans. The exit came days after the one-time frontrunner could not win a single Super Tuesday state, not even her own.

The person was not authorised to speak about Warren’s intentions and talked to The Associated Press news agency on the condition of anonymity.

Warren’s exit extinguished hopes that Democrats would get another try at putting a woman up against President Donald Trump.

For much of the past year, the Massachusetts senator’s campaign had all the markers of success, robust poll numbers, impressive fundraising and a sprawling political infrastructure that featured staffers on the ground across the country. She was squeezed out, though, by Vermont Senator Bernie Sanders, who had an immovable base of voters she needed to advance.

Warren never finished higher than third in the first four states and was routed on Super Tuesday, failing to win any of the 14 states voting and placing an embarrassing third in Massachusetts, behind former Vice President Joe Biden and Sanders.

Her exit from the race following Senator Amy Klobuchar’s departure leaves the Democratic field with just one female candidate: Hawaii Representative Tulsi Gabbard, who has collected only one delegate towards the nomination. It was an unexpected twist for a party that had used the votes and energy of women to retake control of the House, primarily with female candidates, just two years ago.

Warren, 70, began her White House bid polling near the back of an impossibly crowded field, used wonky policy prowess to rocket to frontrunner status by the fall, then saw her support evaporate almost as quickly.