Skip to content
Mirror Desk 11 months ago 7 min read
NEW DELHI: PV Sindhu, Rohit Sharma, Rani, Saurabh Chaudhary, Dutee Chand, Manu Bhaker, Bajrang Punia and Jaspal Rana are some of the prominent names that featured among the winners at the Times of India Sports Awards (TOISA) powered by BHIM-UPI, which honoured the best performances in Indian sport in 2019 at a glittering awards function…

NEW DELHI: PV Sindhu, Rohit Sharma, Rani, Saurabh Chaudhary, Dutee Chand, Manu Bhaker, Bajrang Punia and Jaspal Rana are some of the prominent names that featured among the winners at the Times of India Sports Awards (TOISA) powered by BHIM-UPI, which honoured the best performances in Indian sport in 2019 at a glittering awards function in Delhi on Thursday.

The who’s who of India’s sports fraternity were present at the awards ceremony, including one of the country’s most legendary sports persons, hockey Olympian Balbir Singh Sr, who was part of three of India’s gold-medal winning teams at the Olympics, besides being the manager of the squad that lifted the 1975 World Cup. 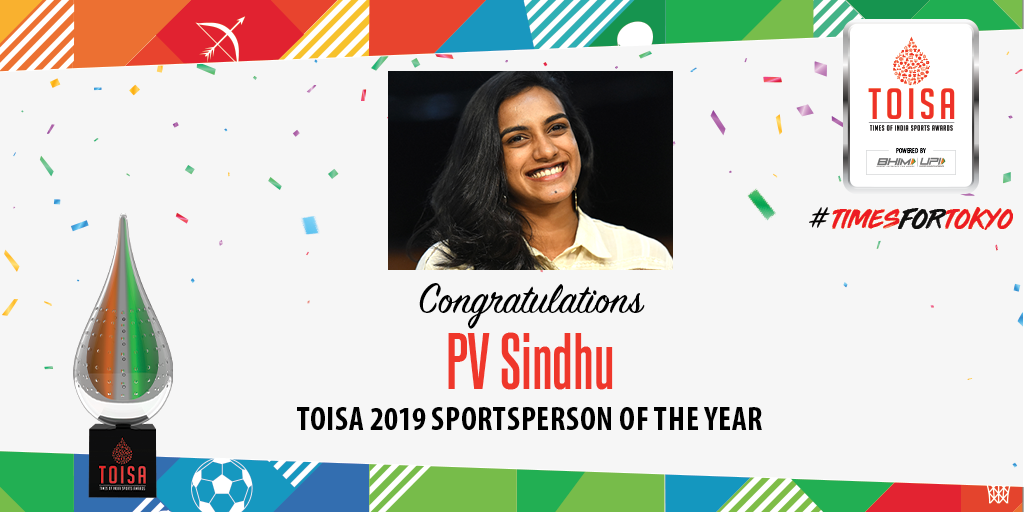 Sindhu’s historic feat of becoming the first Indian to win the badminton World Championships remained unmatched and she was, therefore, named the ‘Sportsperson of the Year’, besides being the joint winner in the Jury’s Choice Award for ‘Badminton Player of the Year’ along with Sai Praneeth. Sindhu, who is currently ranked sixth in the BWF Rankings, completed a hat-trick by winning the ‘Unbreakable Spirit of Sport award’ as well. She is set to enter the Tokyo Olympics in an endeavour to improve on the women’s singles silver medal she won in Rio four years ago.

The men’s award in the badminton category went to 2019 BWF World Championships bronze medallist Sai Praneeth, who created history by becoming only the second man after Prakash Padukone to win a medal at the premier tournament.

The ‘Cricketer of the Year’ award went to Rohit, who set the 2919 ICC World Cup ablaze with a record five centuries, besides crossing many more landmarks in the year. Women’s hockey captain Rani, whose goal helped the team qualify for its second consecutive Olympic appearance, was named the ‘Hockey Player of the Year’. She was also selected as the ‘Inspiration of the Year’ for her exploits in 2019, which also saw Rani winning the ‘World Games Athlete of the Year’ award — the first Indian and the first hockey player to achieve the feat. In the men’s category for ‘Hockey Player of the Year’, Harmanpreet Singh was named the winner, as he turned into a leader of India’s defence, which played a major role in India achieving its best ever world rank of No. 4.

The ‘Team of the Year’ award was won by the men’s hockey team which achieved its best ever FIH rank of 4, besides qualifying for the Tokyo Olympics. Meanwhile shooting star turned National junior coach Jaspal Rana was chosen as the ‘Coach of the Year’ for producing talents like Manu Bhaker and Saurabh Chaudhary.

Incidentally, Chaudhary and Bhaker were joint winners in the ‘Shooter of the Year’ category. In a pathbreaking year for Indian shooting, the duo bagged the 10m Air Pistol mixed team gold in each of the four ISSF World Cups in 2019, besides bagging the Tokyo Olympics quotas in the men’s and women’s 10m Air Pistol.

The other male-female winning combos included Anish Bhanwala (shooting) and Lalremsiami (hockey) as the ‘Emerging Players of the Year’. While Bhanwala won a gold and a bronze in 25m Standard Pistol at the two 2019 World Cups, hockey striker Lalremsiami was named the ‘FIH Rising Star of the Year for 2019’ — a first for an Indian woman. In athletics, Tajinder Pal Singh Toor and Dutee Chand bagged the ‘Athlete of the Year’ awards. Shot-putter Toor won gold medals at the Asian Athletics Championships, while Dutee’s history-making moment came at the World Universiade, where she became the first Indian woman sprinter to win gold.

Amit Panghal and Lovlina Borgohain were the joint winners in the boxing category, while Saurav Ghosal and Joshna Chinappa were selected as the best squash players.

Panghal’s memorable 2019 included a golden hat-trick at the Strandja Memorial, Asian Boxing Championships and India Open; and his best moment came when he won his maiden medal, a silver, at the World Championships.

Top Indian wrestler Punia started 2019 by winning the gold medal at the Asian Wrestling Championships. Later in the year, his consistency at the international level earned him the Rajiv Gandhi Khel Ratna. At the World Championships, he had to settle for a bronze medal, but it helped him bag an Olympic quota for India in the 65kg freestyle category. Vinesh had a successful run in 2019, which culminated with her maiden medal (bronze) at the World Championships and a quota place at the Tokyo Olympics.

Archers Deepika Kumari and Abhishek Verma were also among the winners. Deepika won gold at the 2019 Asian Championships and with it an Olympic quota in women’s recurve.

Mirabai Chanu made a terrific return from injury in 2019, with gold medals at the EGAT Cup and the Commonwealth Weightlifting Championship. Sathish Sivalingam was the male winner in the weightlifting category.

At the World Championships in September 2019, Chanu improved on her own national record and came agonisingly close to a podium finish before settling for a fourth-place finish in the 49kg category. In the process, she became the first woman weightlifter from the country to breach the magical mark of 200kg.

In para-sports, shuttlers Pramod Bhagat and Manasi Joshi were the jury’s pick as winners for their feats at the 2019 World Championships, where they both won gold medals in the singles categories becoming world champions.

Bhagat became a force to reckon with in 2019, winning twin gold medals at the Para-Badminton World Championships in the men’s singles (SL3 category) and men’s doubles (SL3-4 category). An IIT graduate, Bhagat contracted polio as a 7-year-old but never let that impede his ambitions.

Joshi secured her maiden gold at the Para World Championship. An engineer by qualification, Manasi lost her left leg in an accident in 2011. She enrolled at the Pullela Gopichand Academy in Hyderabad in 2018 and since then has not looked back.

Some of the special awards given on the occasion included the prestigious ‘Lifetime Achievement Award’ to Bhaichung Bhutia, ‘Mentor of the Year’ to India’s national badminton coach Pullela Gopichand and ‘Youth Icon of the Year’ to Vijender Singh, the Olympic-medal winning boxer who turned pro a few years ago.

Also, the state of Odisha was conferred with the award for ‘Change Agent of the Year’ for its contribution towards sports, and the Reliance Foundation was named the ‘Corporate Supporter of the Year’.

Here is the full list of award winners for TOISA 2019:

SPORTSPERSON OF THE YEAR: PV Sindhu

COACH OF THE YEAR: Jaspal Rana

CRICKETER OF THE YEAR: Rohit Sharma

FOOTBALLER OF THE YEAR: Sunil Chhetri

MENTOR OF THE YEAR: Pullela Gopichand

INSPIRATION OF THE YEAR: Rani

CHANGE AGENT OF THE YEAR: Odisha