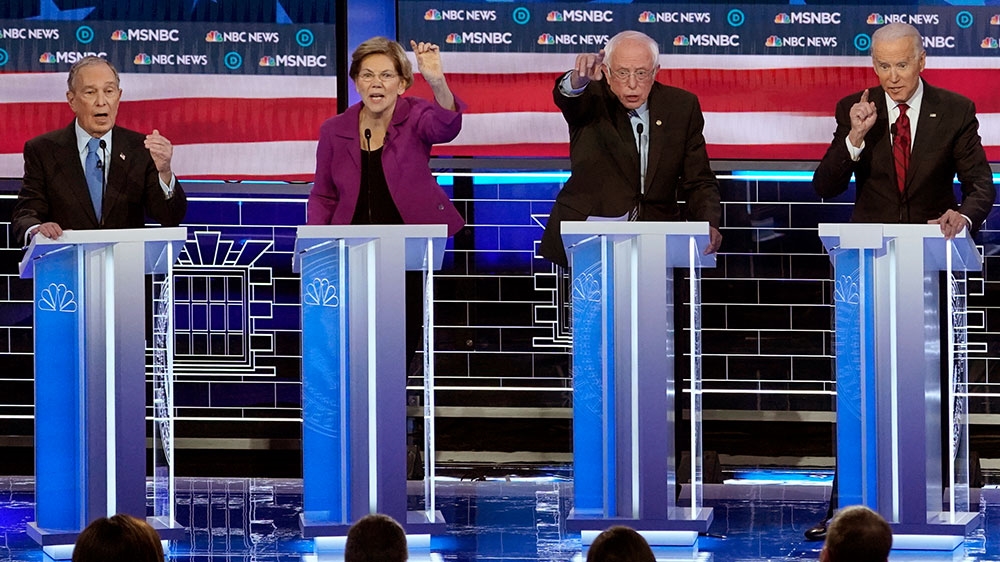 Voters in 14 US states and one US territory will head to the polls on Tuesday in the largest day of voting in the United States primary season.  More than two-thirds of the delegates needed to secure the Democratic nomination - 1,357 out of the 1,991 needed - at the party's convention in July are…

Voters in 14 US states and one US territory will head to the polls on Tuesday in the largest day of voting in the United States primary season.

More than two-thirds of the delegates needed to secure the Democratic nomination – 1,357 out of the 1,991 needed – at the party’s convention in July are up for grabs. California and Texas are the day’s biggest prizes, with 415 and 228 delegates, respectively.

Super Tuesday comes amid a number of fast-moving developments for the Democratic Party: Former Vice President Joe Biden received endorsements from former South Bend, Indiana, Mayor Pete Buttigieg and Senator Amy Klobuchar, who dropped out of the race just ahead of the big election day.

Despite Senator Bernie Sanders’s loss to Biden in South Carolina, he remains a frontrunner. His fellow progressive candidate, Senator Elizabeth Warren, is looking to make up for lost ground on Tuesday. Billionaire Michael Bloomberg’s candidacy will be tested for the first time on Tuesday as he participates in his first voting contests. The fifth Democrat still standing, Tulsi Gabbard, is polling just over 1 percent in national polls.

I’m Joseph and I’ll be taking over the blog from Laurin-Whitney for the next few hours. Here are all the latest updates as voters in 14 states and one US territory head to the polls:

“Now, as voters head to the polls on Super Tuesday, Ms. Warren’s campaign has all but admitted her pathway to winning the Democratic nomination outright has vanished. She enters March seeking to accumulate delegates for a potential contested convention and is most realistically hunting for them in more educated enclaves, like Seattle and Denver, where she recently held rallies and is investing heavily in advertising.”

“In many ways, the arc of the Warren candidacy is the story of her cornering an upscale demographic early, only to become confined to it, and then lose her grip on it,” the newspaper says.

Warren voted in her home state of Massachusetts in the last hour and didn’t sound like someone who is giving up just yet. But polls there have her trailing Sanders by 4 points. If she can’t win her own state, odds are that she’s not going to do terribly well nationally.

Bernie Sanders, the frontrunner heading into Super Tuesday, has cast his vote in his home city of Burlington, Vermont.

Bernie Sanders drove himself to his polling place in Burlington, VT this morning. pic.twitter.com/sSvAoTEHxo

Elizabeth Warren has cast her ballot in her hometown of Cambridge, Massachusetts.

In a video posted to her Instagram page, Warren speaks to a group of children before casting her ballot. As she leaves, a crowd of supports chants “welcome home”.

Warren has eight delegates heading into Super Tuesday, far behind Bernie Sanders 60 and Joe Biden’s 54. She has vowed to stay in the race until the party’s national convention in July.

Bernie Sanders may have the establishment apparatus of the Democratic Party lined up against him, but an analysis of voter preferences by congressional district concluded that he maintains a demographic edge over Joe Biden in key states like California and Texas with huge delegate counts.

The analysis of census data by the University of Southern California Program for Environmental and Regional Equity, provided to CNN, concludes that because Sanders performs well among Hispanic voters and white voters without college degrees, he has a strong chance of earning delegates in congressional districts where those voters compose at least a quarter of the eligible electorate.

Meanwhile, there are fewer Super Tuesday districts where Black voters and white voters with college degrees, who have been more resistant to Sanders, are prevalent, according to the analysis.

This is critical because, unlike the November general election, in which electoral college votes go to whichever candidate wins a state’s popular vote, many of the delegates in today’s primary elections will be distributed proportionally.

It’s not just about winning states, it’s about how much you win by and how much of the vote you get in both states and congressional districts. There are no winner-take-all states.

Polls have opened in the California, a state with 415 delegates up for grabs, the most of any Super Tuesday states.

Sanders is expected to win the majority, an average of 32 percent of the vote, according to polling by FiveThirtyEight. That equates to about 164 delegates, according to their forecasts.

California voters who had already mailed in their ballot for a candidate who has since quit the race will be out of luck, as there is no provision in the state’s election law for a redo.

As long as you are in line by 8PM, you will be able to vote.

Super Tuesday is expected to be the first primary where the influence of the Latino vote will be felt, according to a report by Reuters news agency.

Accounting for 13.3 percent of eligible voters, Latinos will be the largest minority voting group in the general election, according to the Pew Research Center.

That is an 80 percent jump since 2000, and compares to a share of black voters that has been roughly level since then at around 12 percent, and a white share that has fallen 10 percentage points to an estimated 66% of the eligible electorate.

The Latino vote helped shaped recent local races in North Carolina and flipped California Congressional districts in 2018, according to Reuters, both Super Tuesday states. With Latino populations leaning Democratic by about a two-to-one margin, Super Tuesday states like Texas and North Carolina could become increasingly competitive for democrats, along with Florida and Arizona, whose primaries are later in March.

14:20 GMT – How will Biden’s victory in South Carolina affect the race?

The short turnaround between Saturday’s primary in South Carolina, which Biden ran away with, and today’s voting means there hasn’t been much in the way of polling to gauge what impact, if any, that outcome had on voters. This morning, we got one from Data for Progress, a progressive thing-tank.

Here’s a breakdown of the numbers just after the Nevada caucuses, which Sanders dominated, and South Carolina:

Nate Silver over at FiveThirtyEight, one of the top American political prognosticators, has adjusted his projections and now predicts Biden winning the delegate race against Sanders, but failing to secure enough to win the nomination outright.

Sanders remains firmly in the lead in FiveThirtyEight average of national polls.

So this is the first fully post-South Carolina poll we’ve seen in a Super Tuesday state, from a pollster that generally has low numbers for Biden and, ummm, it has Biden +20 in Virginia, a state where the polls were ~tied before SC.https://t.co/8hFcxidICn pic.twitter.com/8VtHdd4F3A

Trump kicked off his Twitter game on Tuesday with tweets aimed at Michael Bloomberg.

“Also as mayor he was very bad under pressure – a chocker!” Trump added without elaborating.

Mini Mike Bloomberg can never recover from his incompetent debate performances. Also, as mayor he was very bad under pressure – a choker!

The 14 states voting on Tuesday cover nearly all time zones in the US. Here’s a look at when polling stations close across the US.

Tornadoes that ripped through parts of Tennessee, early on Tuesday, killing at least seven people, have closed some polling stations in the state.

The city government of Nashville said voters whose polling stations were hit by the twister can vote at two Election Commission office locations instead.

Any voter whose polling location has been affected by damage will be able to vote at either of the two Election Commission office locations today:

Reminder that all polling locations open one hour late at 8 AM.

Polling across Davidson County, where Nashville is located, are also opening an hour late due to the tornado. The tornados also affected the counties of Putnam and Benton. A resident makes her way down a street amid downed trees and heavy debris in Nashville, Tennessee [Brett Carlsen/Getty Images/AFP]

Voters in the East Coast Super Tuesday states and those abroad are taking to social media to share their voting experiences online.

More than 1,300 delegates are up for grabs on Tuesday. Here’s the breakdown based on state:

Polls have opened in a number of East Coast states, including Virginia, North Carolina and Maine. Some polling locations have also opened in Vermont and Massachusetts.

Of the remaining candidates, here’s a look at how many delegates each candidate has heading into Super Tuesday:

Last year Democrats saw a diverse field of more than 25 candidates. Today there are only five.