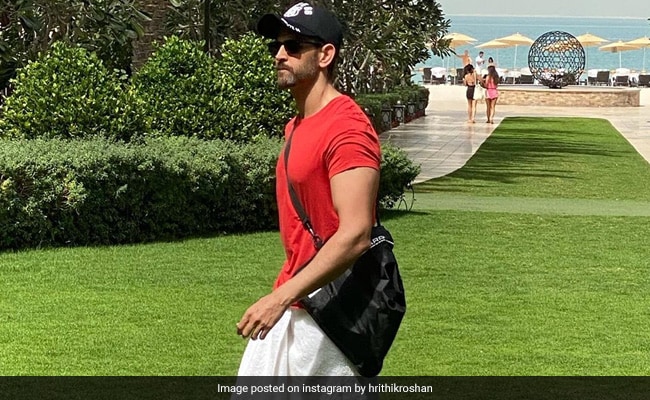 Hrithik Roshan shared this picture. (courtesy: hrithikroshan)HighlightsHrithik Roshan shared a picture on Monday In the picture, he can be seen wearing a t-shirt and a towel We got another glimpse of his Dubai diariesNew Delhi: It's not just Deepika Padukone's style that has been getting the Ranveer Singh treatment off late. Hrithik Roshan, currently in…

It’s not just Deepika Padukone’s style that has been getting the Ranveer Singh treatment off late. Hrithik Roshan, currently in Dubai, just posted pictures of himself in a red t-shirt and what looks like a lungi – it seems to be a towel wrapped around him skirt-fashion. We don’t know if it contributed to his somewhat unexpected choice of outfit but one foot appears to be bandaged up. In his caption, Hrithik didn’t fail to credit the enfant terrible of Bollywood style for his unconventional look: “Fashion inspiration courtesy: I guess Ranveer Singh,” the 46-year-old star wrote.

Here’s the picture we’re talking about:

The Super 30 actor also shared some pictures on his Instagram story and wrote, “Oops. Should have wrapped it a little tighter.”

In the comments section of his post, Hrithik Roshan’s Super 30 co-star Mrunal Thakur asked, “What happened to your foot?” A response from Hrithik is awaited – as also Ranveer’s reaction, which we have absolutely no doubt will be forthcoming.

Ranveer Singh is (in)famous for his rather outrageous style, which has included everything from mismatched prints to skirts to nose rings. He was spotted wearing a lungi on the streets of Mumbai a couple of years ago.

Updates | Ranveer Singh spotted outside the gym wearing a lungi to celebrate #WomensDay#HappyWomensDaypic.twitter.com/NVcQFhyoP5

So infectious is Ranveer Singh’s outlandish fashion that it seems to have rubbed off on wife Deepika Padukone, who was once but can no longer be accused of erring on the side of caution with her style choices:

Back to Hrithik Roshan. The actor also shared a picture with his team on Sunday. He captioned it: “Men at lunch.”

Have you checked out this picture yet?

Hrithik Roshan had added some pictures to his Dubai diaries on Friday. He stood by the blue waters for a photoshoot, which he captioned: “Looking for the storm. Meanwhile, enjoy the calm.”

The Krrish had also shared selfies with his bodyguard and fitness trainer. He wrote, “Men at work.”

Hrithik Roshan was last seen in the 2019 film War, which was directed by Siddharth Anand. He co-starred with Tiger Shroff and Vaani Kapoor in the film. The actor has not announced new projects that he might be working on.