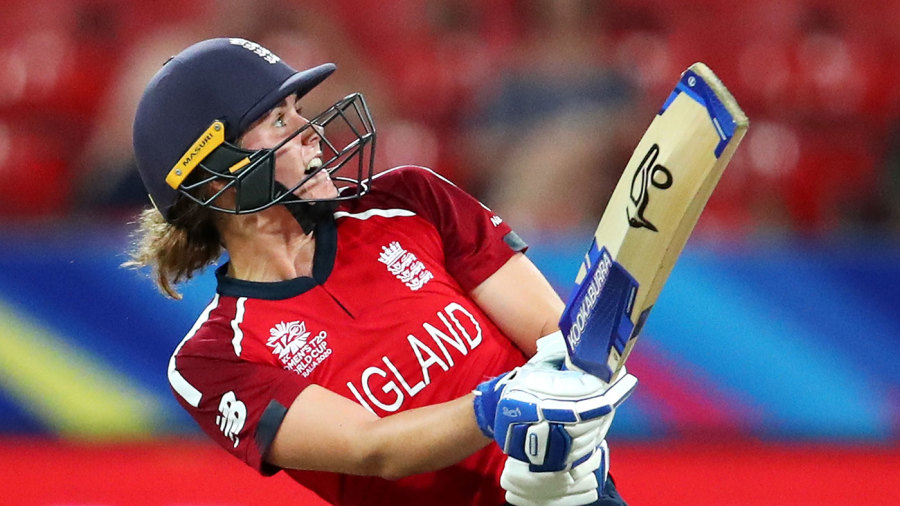 7:38 PM ISTThe Report by Valkerie BaynesEngland 143 for 5 (Sciver 57) beat West Indies 97 (Kirby 20, Ecclestone 3-7) by 46 runsEngland took another step towards the title decider by booking their place in the semi-finals with a convincing victory over West Indies in Sydney. Before her side left for the tournament, England's new…

England took another step towards the title decider by booking their place in the semi-finals with a convincing victory over West Indies in Sydney. Before her side left for the tournament, England’s new Australian coach, Lisa Keightley, had stated that she expected her charges to be in the final and, while their wobble against an impressive South Africa in their opening match raised concerns that objective might be under threat, their latest performance confirmed it remains the basis of their expectations.

Natalie Sciver set the tone with another half-century to lead England to a competitive total on a pitch where, earlier in the day, South Africa had managed 136 for 6 in advancing to the knockout stages with victory over Pakistan. Sophie Ecclestone finished the job with an emphatic 3 for 7 off 3.1 overs. The bowlers were undermined by some sloppy fielding from England, but a spate of troubling injuries for West Indies helped to put the result beyond doubt.

England bowler Kate Cross was taken to hospital after hurting her ankle during the warm-up. While Cross has not played so far in the tournament and was not due to face West Indies, any enforced absence would rob England of an option at the business end of their campaign. But it was a groin injury to West Indies captain Stafanie Taylor, that led to her being stretchered from the field after retiring hurt on 15, that put a serious dent in her side’s prospects of taking the fight to England. Taylor played no further part in the game as England moved to the top of Group B with a superior net run rate to South Africa, who also have six points with a game in hand. Their opponents will be decided in the final round of matches, with India already through, and Australia and New Zealand primed for a winner-takes-all clash on Sunday.

Sciver’s rich vein of form continued, her third fifty in four innings at this World Cup had match-winning potential all over it. Sciver made 57 off 56 balls on a slow pitch, following innings of 50 in a losing cause against South Africa, an unbeaten 59 against Thailand and 36 against Pakistan.

Sciver’s command of the innings became ever more important when England’s other in-form batsman, Heather Knight, was run out through what looked like a lack of urgency on the part of the England captain. She ambled through for a single and was found short of her ground as Shakera Selman fired the ball in from short midwicket. Like Knight before her, Sciver fell slightly tamely with an over of the innings to come, spooning a catch to Hayley Matthews at midwicket, but her touch is undeniable.

England’s top order has been a talking point so far in this tournament, with Tammy Beaumont being pushed down the order – ostensibly due to her superior skills at the death – in favour of an opening partnership of Danni Wyatt and Amy Jones. The jury remains out after Beaumont was moved back up to the top after Jones had struggled with scores of 23, 0 and 2. Beaumont was out for a second-ball duck, playing round a full Selman delivery which pinned her plumb in front of the stumps.

But if that part of the switch didn’t pay off, then Jones’ free-flowing cameo at No.6 against West Indies certainly did. She scored an unbeaten 23 off 13 balls, including three fours, to provide England with some vital late momentum as they claimed 36 runs in the final three overs. While Beaumont and Jones have opened together in ODIs in recent times, that effort, along with Wyatt’s solid 29 off 27 balls at No.1, looks to have cemented their respective roles for the final matches.

When Taylor was stretchered off with an apparent groin injury, the wind seemed to go out of West Indies’ sails. Taylor struck a Sciver delivery towards cover and set off but could barely manage to hobble through and collapsed to the ground clutching at her upper thigh in obvious agony. The same motorised stretcher that had driven Cross from the ground before the match was called upon again and Taylor retired hurt.

It was not the only worrying injury for West Indies, with Britney Cooper rolling her ankle as she ran between the wickets and battling with discomfort for the rest of her innings, which by necessity consisted of her taking aim at the boundary rather than seeking singles. She was out attempting a big shot off Ecclestone only to find herself stumped.

Ecclestone was in the thick of the action, dismissing Deandra Dottin with just her sixth ball, in the third over of West Indies’ chase. Ecclestone tempted Dottin into a pull that wasn’t there to be had, and Sciver took a low catch at short midwicket. Ecclestone also took the last wicket, pegging back Anisa Mohammed’s off stump to seal the win and claim her 50th wicket in T20Is. That a proven performer like Ecclestone was delivering wickets was no surprise, nor was it that Sarah Glenn, a legspining revelation for England in the past few months, was also instrumental. Glenn finished with 2 for 16 from her four overs, giving her six wickets for the tournament so far at an average of 11.33 and following her her 3 for 15 in the previous match against Pakistan.

On a pitch that was conducive to spin, England opted for a third specialist in the area, Mady Villiers. Making her World Cup debut and playing just her fourth T20 international, offspinner Villiers opened with a wicket maiden when she took a sharp return catch with just her fourth ball to dismiss Shemaine Campbelle, all the while avoiding a near collision with non-striker Chedean Nation.