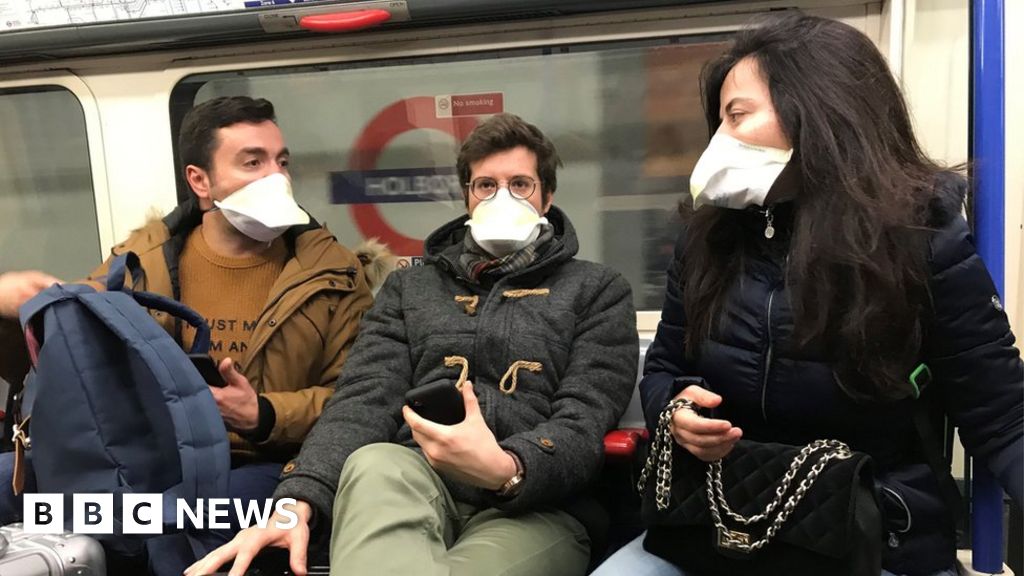 Image copyright PA Media Image caption Some people in the UK have begun wearing masks as the number of cases increases Twelve more patients in England have tested positive for coronavirus, taking the total number of UK cases to 35.Three patients were close contacts of a known case which was transmitted in the UK, chief…

Twelve more patients in England have tested positive for coronavirus, taking the total number of UK cases to 35.

Three patients were close contacts of a known case which was transmitted in the UK, chief medical officer Prof Chris Whitty said.

One person from Essex had “no relevant travel” and it was unclear how they had contracted the virus.

Out of the remaining eight cases, six had recently returned from Italy and two had been to Iran.

Bury Council confirmed that the Greater Manchester case was one of its residents, who had become infected in Italy.

On Friday, a man from Surrey became the first person to be infected within the UK.

The patient, who is being treated at Guy’s and St Thomas’ Hospital in central London, had not been abroad recently – unlike the other cases in the country.

The latest positive tests come after three more cases were confirmed in England on Saturday.

One of those was a member of staff at St Mary’s School in Tetbury, Gloucestershire, the primary school said on Sunday.

That follows another school – Willow Bank Infant School in Woodley, Berkshire – confirming that one of its staff had been infected.

The government has said no tactics will be “off the table” as part of its plan to contain the virus in the UK.

Mr Hancock said there were four phases to the plan:

Currently, the UK is in the “containment” phase – which health leaders say may still be sufficient.

But the next phase could see broader “social distancing” measures.

Mr Hancock did not rule out following China’s lead in shutting down cities if the outbreak escalates, but said there was “clearly a huge economic and social downside to that”.

Labour shadow health secretary Jonathan Ashworth said Mr Hancock must give more detail of any emergency powers he wants to bring in so that MPs “can properly scrutinise” the plans.

Meanwhile, Lib Dem MP Layla Moran has written to the health secretary to urge him to make sure people are paid if they have to self-isolate, otherwise there could be “devastating” effects.

More than 200 British holidaymakers locked down at a quarantined hotel in Tenerife have been told they will be allowed to fly home, if they test negative for the virus.

The travellers have been quarantined at the H10 Costa Adeje Palace hotel since Tuesday after four Italians contracted the virus. Some have already been allowed to leave but others are awaiting test results.

The Foreign Office is in contact with operators and travel agents about their plans to return Britons to the UK.

What do I need to know about the coronavirus?

Globally, around 86,000 people have been infected, with cases in more than 50 countries. About 3,000 people have died – the vast majority in China’s Hubei province, where the outbreak originated in December.