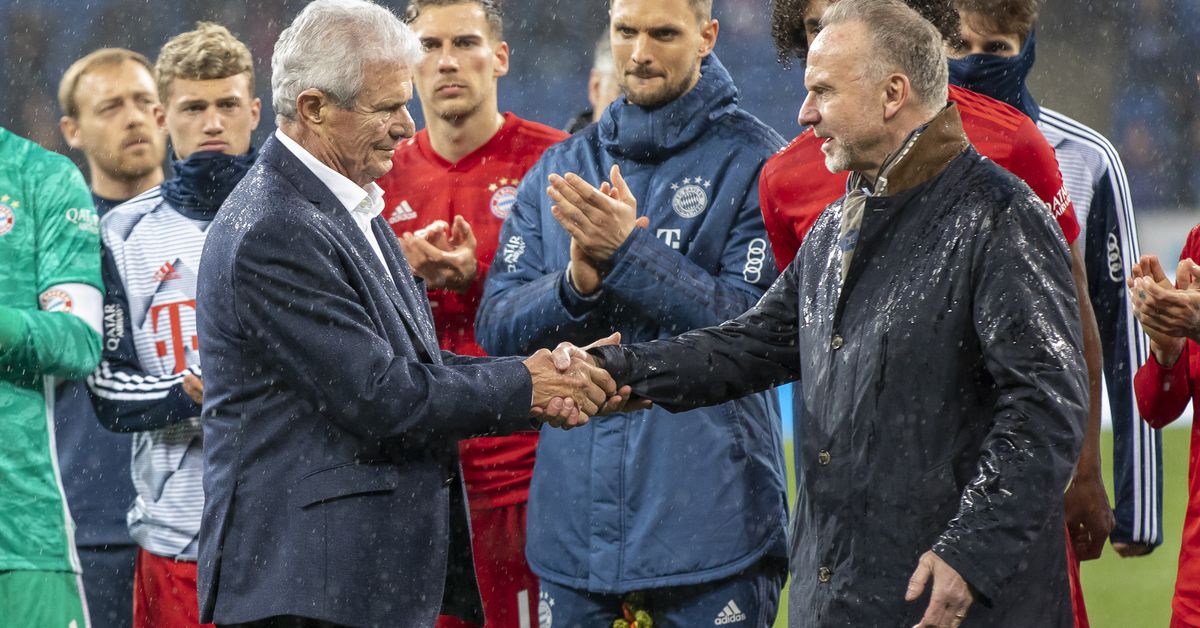 For the first time in Bundesliga history, the players of both sides reached an agreement to stop playing and run down the clock. The two teams were Bayern Munich and TSG Hoffenheim, and the match was already, by normal measures, over: Bayern led 6-0 in the 67th minute when head referee Christian Dingert brought the…

For the first time in Bundesliga history, the players of both sides reached an agreement to stop playing and run down the clock. The two teams were Bayern Munich and TSG Hoffenheim, and the match was already, by normal measures, over: Bayern led 6-0 in the 67th minute when head referee Christian Dingert brought the match abruptly to a halt. The reason was a banner unfurled by the traveling Bayern fans in the away block:

The banner attacking Dietmar Hopp as a Hurensohn — literally “whore’s son” and, in context, a stronger insult than “son of a bitch” in English — was one of several today that ultras across the Bundesliga raised to protest Hopp, namely, in Darmstadt, Dortmund, and Cologne (SPORT1). Bayern CEO Karl-Heinz Rummenigge is probably right to suspect that the ultra groups acted in concert.

After the Bayern away fans displayed a second banner ten minutes later that simply read Du Hurensohn, the D and H colored blue to indicate Hoffenheim’s Dietmar Hopp, the game was halted yet again. This time the players of both teams conferred and decided to take action.

Manuel Neuer described how the decision to stop playing when the match was resumed came about. He said (AZ),

We all discussed it, with the Hoffenheim players, the coach of the opposing team [Alfred Schreuder] and the sporting director [Hasan Salihamidzic]. Of course, us too as teammates. I think that it was all our idea and that it was also the right step to show outwardly that we in soccer also stand with one another.

And so the final thirteen minutes of the match passed by while players took turns juggling the ball, passing, trying tricks, and chatting. After the match, both teams and their respective officials appeared before the Hoffenheim curve in a show of solidarity (see the main picture above).

The Bayern players did not greet the Bayern block.

Why Hopp and not Torunarigha?

It is both telling and unfortunate that the victim of the offending banner and the person whom both teams so conspicuously supported was SAP founder and software entrepreneur Dietmar Hopp, the German billionaire who elevated Hoffenheim from the 5th division in 2000 to the Bundesliga in 2008.

Hopp played for TSG 1899 Hoffenheim as a boy. He has invested hundreds of millions of euros into the club, financing both their previous stadium and their current arena in Sinsheim, the PreZero Arena (aka the Rhein-Neckar-Arena). Since 2015, Hopp has held 96% of the voting rights in the club by reason of an exception to the 50+1 rule. He is both like and unlike Red Bull, Bayer, and Volkswagen, the corporate owners of RB Leipzig, Bayer Leverkusen, and VfL Wolfsburg.

As a prominent exception to the 50+1 rule, and an individual in contrast to the corporations named above, he conveniently gives a face to a problem and makes for a perfect target — just as he was disturbingly depicted in crosshairs in Mönchengladbach last weekend on a banner that also brought play to a half.

Incidents like the display of offensive banners and, at least in theory, racist abuse are handled in Germany according to what is known as the “Three-Step Procedure” (in German, Drei-Stufen-Plan). After introducing the procedure at the 2017 Confederations Cup, FIFA requested all member federations, including the DFB, to follow the procedure in a circular sent on July 25, 2019.

In today’s game between Bayern and Hoffenheim, steps 1 and 2 were duly followed. The players found their own solution to avoid abandoning the match — although by then the Bayern ultras had packed up their Hurensohn banners.

Why did the system fail Jordan Torunarigha so spectacularly in Gelsenkirchen three weeks earlier? Hertha Berlin’s Torunarigha was subjected to racist abuse by Schalke fans during the second half of the game. He was visibly upset. You can read it in his face:

But head referee Harm Osmers was apparently oblivious to the proceedings and did not learn of the incident until Hertha’s sporting director told him personally prior to stoppage time. By then, thirty minutes after it had happened, Osmers decided it made no sense to stop the game or make a stadium announcement.

When Torunarigha threw a crate of water bottles to the ground after being pushed into Schalke coach David Wagner, Osmers gave him a second yellow card and sent him off. He was suspended the next game.

The DFB announced it was launching an investigation into the abuse.

Why was nothing done for Torunarigha at the time? The problem, in my view, is systemic: FIFA’s Three-Step Procedure can guide an officiating team as to how they should respond to a large banner that any linesman might notice and see, but it is simply incapable of addressing racist abuse that is not immediately perceptible to anyone but the target himself.

That puts the onus to respond on the victim, his teammates, and potentially even his competitors. In Torunarigha’s case, Hertha was unprepared and unsure. The players should perhaps have stopped playing in protest then — but the referee was unaware of the incident and could have penalized them for leaving.

If anything, the lesson learned is that teams need to be prepared to act in solidarity and inform officials of racist abuse right away. It is truly sad that Jordan Torunarigha had to play on because the system in place is poorly designed to respond to and punish fans relying on the anonymity of the crowd to abuse individual players of color.

Hence it was Dietmar Hopp, instead, a white, wealthy German technology magnate who became the beneficiary of FIFA’s Three-Step Procedure and, for the first time ever in the Bundesliga, a joint decision by two soccer teams of diverse makeup to cease competing in protest of a group of ultras’ offensive banners.

Hurensohn may be a stronger insult in German than “son of a bitch” in English, but given the context of the recurrent abuse of Hopp, especially the crosshairs incident, it is not especially surprising that the Three-Step Procedure was used.

Some commenters here have questioned the motivations behind the impassioned response by Bayern Munich’s front office: coach Hansi Flick angrily protesting the the fans, sporting director Hasan Salihamidzic joining him, and then the CEO Rummenigge himself and his heir apparent Oliver Kahn joining the remonstrations with the ultras.

They were not merely making a show of solidarity to forestall a hefty fine or a stadium ban in Sinsheim. Rummenigge, I strongly believe, views Dietmar Hopp as a peer and colleague. He was beside himself in anger when the ultras persisted in their protest and described the event as “a dark day for football” afterward when our own Davis VanOpdorp asked him how he would remember it.

I didn’t think about it — I went right to the stands. I was so disappointed that something like that was happening. Everything that their own team had accomplished was thrown away. It puts you at a loss and makes you absolutely furious.

Flick has ties to Dietmar Hopp and Hoffenheim: before he became Jogi Löw’s assistant, he coached Hoffenheim for the first four seasons of their journey from the 5th to the 1st Bundesliga, from 2000 to 2005.

“I myself grew up here in the region, worked here,” he said. I feel very, very bad for Dietmar Hopp. That was a black day for FC Bayern.”

Hasan Salihamidzic published an unusual tweet in which he decried the “sad day” as “a low” for Bayern. For Salihamidzic, the episode resonated beyond the ultras’ agitation in favor of 50+1 or against collective punishments by the DFB. For him, the ultras’ act was a display of “hate an intolerance,” which “have no place in soccer and in society.”

The mighty Dietmar Hopp is thus paradoxically the victim of hate and intolerance and the beneficiary of this extraordinary gesture by the players of Bayern and Hoffenheim. But such a reaction was long overdue, in the Bundesliga and elsewhere, for far more vulnerable victims, ordinary players of color like Jordan Torunarigha in Gelsenkirchen or Antonio Rüdiger in London, whose only defense is an inadequate system and their own determination to defend themselves.

In Sinsheim, though, this particular story is about more than just race or power or wealth. The players’ decision to leave the pitch without greeting their own ultras is indicative of a growing rift between clubs like Bayern and Dortmund and some of their most fanatical fans. As Flick said, “They knew what they were doing.”

Ultras across Germany are in large part responsible for the electric atmosphere of Bundesliga games. But their demonstrations against the DFB and figures like Hopp, constant pyrotechnics, and other incidents have set them increasingly at odds with the German federation.

DFB, DFL, clubs, we all must act in concert. Action must be taken against these trouble-makers who have nothing to do with soccer. Things cannot continue this way in soccer.

How that plays out remains to be seen, but the DFB and Dietmar Hopp will undoubtedly remain in the crosshairs of ultras throughout Germany.