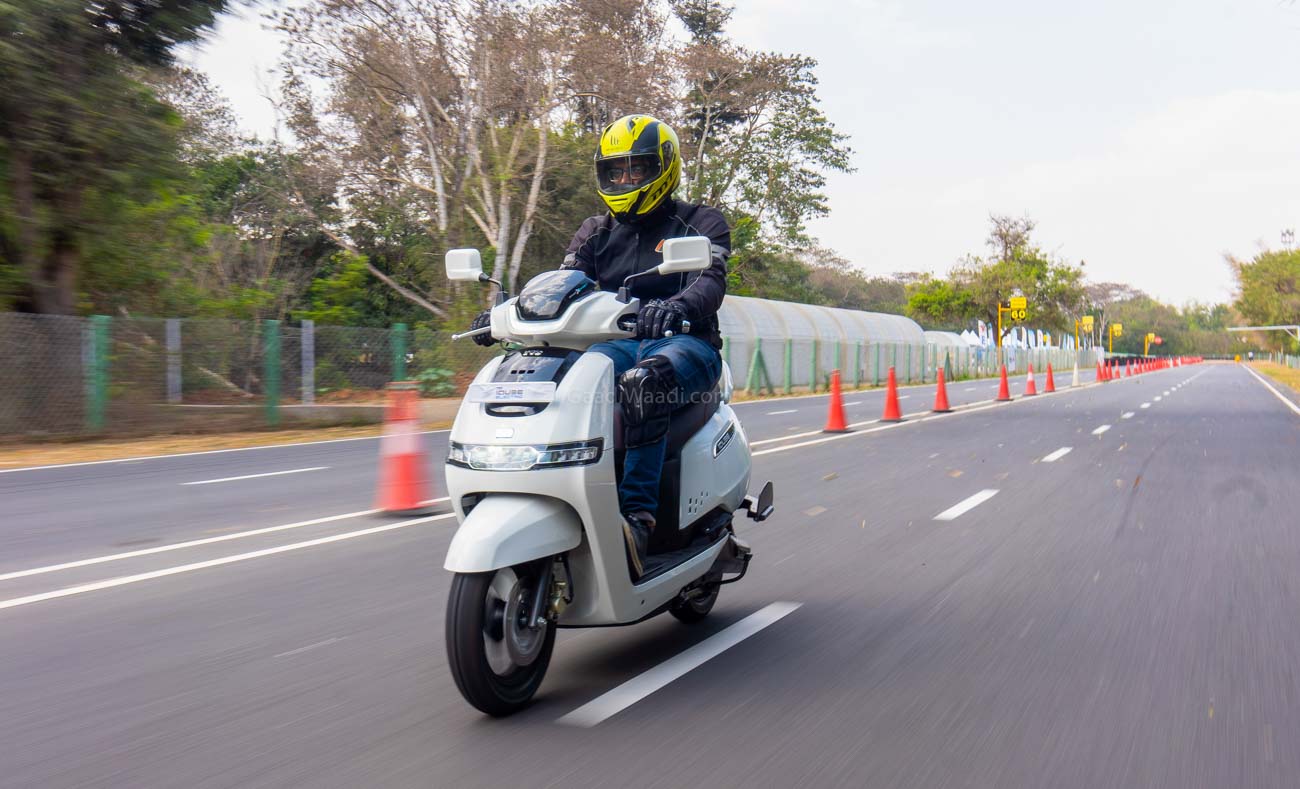 The iQube is the first electric scooter from TVS and has it impressed in its first ride? Find out below! Whether you are with it or against it, electric vehicles are the thing of the future. There is no denying the fact that at some point in your life, you would be using the electric…

The iQube is the first electric scooter from TVS and has it impressed in its first ride? Find out below!

Whether you are with it or against it, electric vehicles are the thing of the future. There is no denying the fact that at some point in your life, you would be using the electric mode of transport but is it already here? Does India finally have a zero-emission scooter it could rely on? I went to TVS’ test track at its manufacturing plant in Hosur to find out!
There have been several startups trying to make a mark in the burgeoning world of electric two-wheelers but to sprinkle the excitement the first month of the new year saw two electric scooters getting launched from mainstream manufacturers as Bajaj with Chetak and TVS with the iQube announced their arrivals into the electrification space.
The popular homegrown brands are arch-rivals in the IC-engined motorcycle field and in the EV class expect no less fight between them. But, the catch is you cannot buy them everywhere across the country. The iQube has been made available in ten dealerships across Bengaluru and its reach will be expanded in a phased manner.

The iQube name made its debut at the 2014 Auto Expo as TVS displayed a hybrid scooter. Nearly six years later, the production iQube is on sale, however, it shares very little in common with the concept in terms of design. The iQube is not a hurriedly put together product by any means as years of R&D went into the scooter with high local content in terms of battery and on the electronics side.
The iQube is certainly an eye-pleaser but it doesn’t have dramatic styling cues. The LED headlights and the turn blinkers are arranged in a seamless strip and underneath the black windscreen, U-shaped LED Daytime Running Lights are stacked in two layers. The blackened apron, mirror stems, middle part of the single-piece grab rail, lower side panels and around the instrument cluster bring a dual-zone vibe to the iQube.

The LED taillight setup flanks the rear LED turn indicators in a similar fashion to what can be seen in the headlamp cluster. A closer look will make you appreciate the silver accents up front and rear. Other highlights include keyfob replicating the design in cars, iQube electric badge on the sides, Q park assist badge, squared rearview mirrors, side vents and blue illuminated lettering.
The switchgear section is neatly finished and TVS says the switches are brand new while sharing the internal elements with models within the domestic range. There is a dedicated mode button for toggling between Eco and Power modes along with one for park assist and the hazard switch is on the top right side.

The tactile feel of the switchgear is second to none as TVS is known for good build quality, so are the fit and finish of the body panels. The SmartXonnexct enabled five-inch TFT cluster greets when the iQube starts and it has 30 features along with nearly 30 more when Bluetooth is connected and accessed through app pertaining to safety, security, tracking, real-time status, navigation, summary, call and message alerts and more. The Q park assist helps in easily parking the scooter and it.operates at the maximum of 3 kmph. Even at small gradients, it does come into play.
The iQube can be charged at the regular IEC 60309 socket at home or through the public charger. The TFT automatically adjusts to brightness and even during broad daylight, I did not find a problem with its visibility except for minor reflections.

The electrified scooter draws juice from three batteries one positioned below the floorboard and the pair of them beneath the seat – 2.25 kW capacity with 3-year/50000 km warranty and has BMS controlled protection. Despite the positioning, the under-seat storage stands at a respectable 16 litres and it has USB socket for charging along with a keyhole that can be used to access the standalone battery.
The batteries add up to the kerb weight and it tips the weighing scale at 118 kilograms. TVS says despite sharing some mechanical elements like the tyre, brakes and suspension with other scooters from the brand, the iQube comprises of a brand new tubular frame.
You can seamlessly switch between Eco and Power modes but the former has a top speed of only 48 kmph and you will experience drop in speeds when suddenly switched back from Power mode as it keeps it under check for the betterment of the range.
The top speed of the iQube is rated at 78 kmph and the cluster flickers between 80 and 81 kmph in Power mode. The difference between both the modes are just the speeds as acceleration and all the dynamic characteristics remain identical. When accelerated, the iQube won’t hesitate to climb up the speeds. It gets to 50 kmph quickly but beyond that you could notice the scooter struggling to reach 80 kmph as quicker.

Furthermore, at speeds below 50 kmph the suspension’s soft setup (telescopic hydraulic front and twin-tube hydraulic shocks at rear) wont bother you much but the lack of of good wind blast protection and higher speeds create instability. Between 60 and 80 kmph, the bumpiness of the Hosur testing track was really felt.
The brakes (220 mm front disc and 130 mm drum rear) do come in noisy when pulled suddenly but the gradual operation of it gives more confidence to the rider. The regenerative technology is said to improve the range by 10 per cent and it uses the energy during deceleration and braking for aiding more juice to the battery.

It does make the braking and deceleration a little unusual as the feedback could be improved but when I got used to it in the first run, I felt more comfortable as the day progressed. The power mode has claimed range of 55 km and for Eco, it stands at 75 km. Having spent the day pushing the iQube to its maximum abilities, I would say that both the range estimations will be met or sometimes exceeded in real-world conditions.
The flickability of the iQube is good if not sportier but the overall weight can be felt distributed with rear being heavier due to the battery positioning. The hub-mounted traction motor has peak power of 4.4 kW and peak torque at 140 Nm.
TVS iQube Review Verdict:

The iQube will play a significant role in TVS’ transition towards electrification and it is a good start in all respects. With decent range capabilities for daily city commuting, backed up by the plethora of connectivity features with safety and convenience in mind, the iQube appeals for a wide set of customers mainly the youth and the urban working class.
All I hope is for TVS to expand the iQube’s reach sooner rather than later across the Tier 1 amd Tier 2 cities. It is competitively priced at Rs. 1.15 lakh (on-road, Bengaluru) against Bajaj Chetak and Ather 450 X. As the awareness of eco-mobility spreads, setting up charging infrastructure across the country helps prospective buyer wanting to own an electric two-wheeler to access the products more and thus they can consider them as definitive alternatives for petrol-powered vehicles.
Image Gallery: