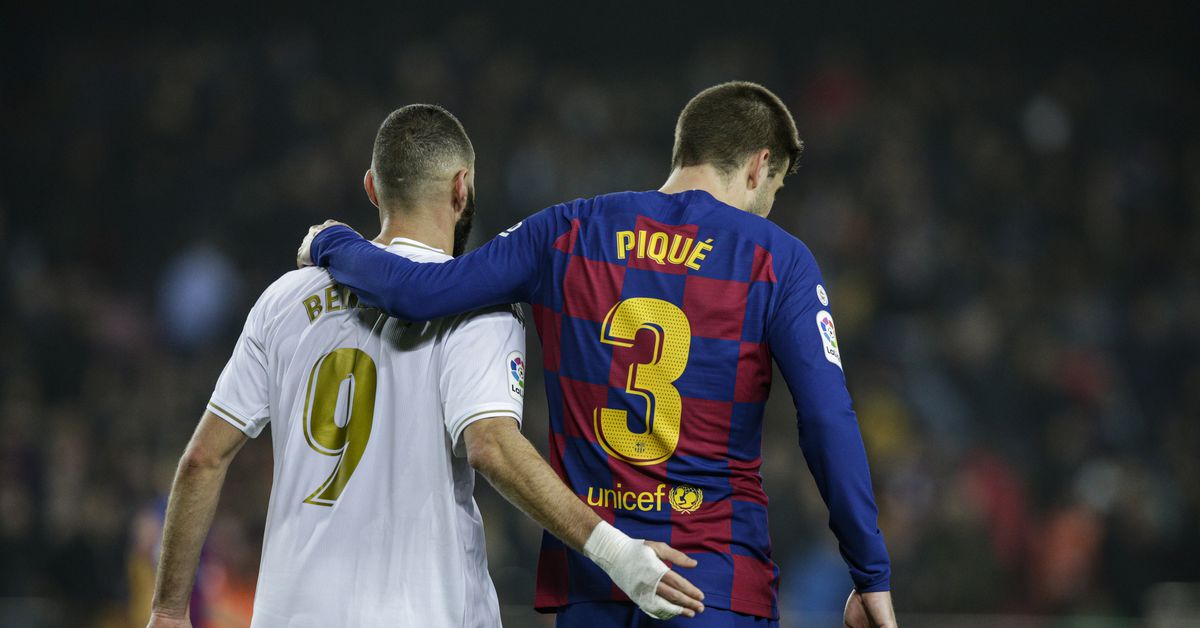 Barcelona have injuries in defence with full-backs Sergi Roberto and Jordi Alba definitely out. Gerard Pique is a bit of a doubt with an ankle problem but it’s hoped he will play. If Pique does make it then Quique Setien still has to make a tough decision between Clement Lenglet and Samuel Umtiti as his…

Barcelona have injuries in defence with full-backs Sergi Roberto and Jordi Alba definitely out. Gerard Pique is a bit of a doubt with an ankle problem but it’s hoped he will play.

If Pique does make it then Quique Setien still has to make a tough decision between Clement Lenglet and Samuel Umtiti as his partner. Setien seems to have just favoured Umtiti so far but Lenglet will be fresh after not starting against Napoli.

There will be plenty of focus on the full-backs too at the Bernabeu. Junior Firpo came in for much criticism in midweek against Napoli and seems to be devoid of confidence. A big performance is needed from the youngster to answer his critics.

On the other side of the pitch Nelson Semedo is expected to come up against Vinicius Jr. The Brazilian has been a lively, if still frustrating, presence for Real Madrid in recent weeks and his battle with Semedo could prove key.

Barcelona haven’t kept a clean sheet away from home since the start of December, although that one did come in Madrid in a 1-0 win at the Wanda Metropolitano.

Martin Braithwaite thrilled supporters with his brief cameo off the bench in the 5-0 win over Eibar which suggests he will see more first-team game time at the Santiago Bernabeu.

It would be a surprise if the Denmark international were to start the game but it can’t be completely ruled out. Arturo Vidal may need a breather, Ansu Fati hasn’t seen much game time lately and Braithwaite has already said he “really wants” to play.

Braithwaite does know what it’s like to score against Real Madrid too. His first Leganes goal came against Los Blancos in the Copa del Rey in 2018-19.

The 28-year-old is a willing runner, can offer Barca pace in attack and has bags of enthusiasm as he showed against Eibar. He can also play with freedom because, rightly or wrongly, nobody is expecting too much from him over the next few months.

Barcelona have enjoyed their visits to the Bernabeu recently and have won eight of their last 11 at the home of Los Blancos. Last season brought wins at Real Madrid in La Liga and the Copa del Rey in the space of just four days.

Real Madrid’s home form is not good either currently. They have failed to win their last three and have been beaten by Manchester City in the Champions League, Real Sociedad in the Copa del Rey and only drew 2-2 with Celta Vigo in La Liga.

The Bernabeu has also been a happy hunting ground for Quique Setien, particularly when Zinedine Zidane has been in charge of the Spanish giants.

Setien oversaw a 1-0 win with Real Betis in 2017-18, thanks to a 94th-minute winner from Antonio Sanabria and beat Real Madrid 2-0 on the last day of last season. Goals from Loren Moron and Jese ended the campaign in style.

The new Barcelona boss nearly pulled off a shock win with Las Palmas too. His team were 3-1 up in March 2017 but had to settle for a draw thanks to two late Cristiano Ronaldo goals.

Setien’s overall record against Zidane reads two wins, two defeats and two draws but something will have to give on Sunday at the Bernabeu.