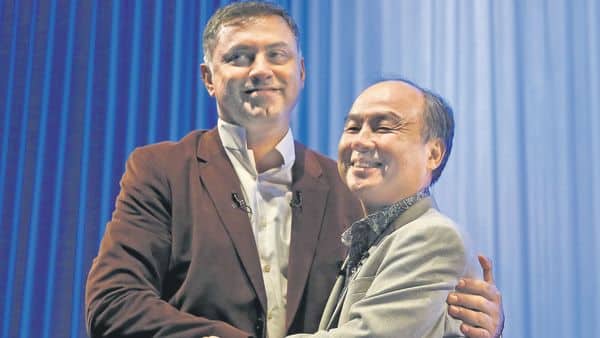 Nikesh Arora, left, with Masayoshi Son at a SoftBank event in October 2015, when Arora was a senior SoftBank executive and the target of a mysterious campaign of allegations (Photo: Reuters) 3 min read . Updated: 28 Feb 2020, 12:25 AM IST Mihir Dalal Misra, head of the $100-bn Vision Fund, is said to have…

Nikesh Arora, left, with Masayoshi Son at a SoftBank event in October 2015, when Arora was a senior SoftBank executive and the target of a mysterious campaign of allegations (Photo: Reuters)

Misra, head of the $100-bn Vision Fund, is said to have conducted a campaign to eject Arora by planting negative news stories, trying sexual blackmailThe scrutiny faced by Misra is reminiscent of Arora’s situation before he was forced to leave SoftBank

Bengaluru: SoftBank Group was battered by a new crisis after The Wall Street Journal reported that Rajeev Misra, the head of its $100-billion Vision Fund, orchestrated the exit of its top executives Nikesh Arora and Alok Sama. The Japanese company, already under fire for its expensive bets in WeWork and Uber, said it is reviewing the charges against Misra, a company director and close associate of SoftBank founder and chief executive officer (CEO) Masayoshi Son.

Misra and his associates conducted a campaign to eject SoftBank’s chief operating officer (COO) Arora by planting news reports against him in the media and attempting sexual blackmail, the Journal reported, citing people familiar with the matter. It also said Misra inspired a shareholder campaign that levelled charges of unethical behaviour against Arora, who was at that time Son’s anointed heir. Sama, another senior SoftBank executive who was a rival of Misra’s, was also a target of this smear campaign, the Journal reported. While Arora left in June 2016, Sama left last April.
Through a SoftBank spokesperson, Misra denied the allegations and said: “These are old allegations which contain a series of falsehoods that have been consistently denied. (Misra) did not orchestrate a campaign against his former colleagues.”
The SoftBank spokesperson said in an email, “For several years, we have investigated a campaign of falsehoods against SoftBank Group and certain former employees in an attempt to identify those behind it. SoftBank will be reviewing the inferences made by The Wall Street Journal.”
Allegations against Misra, who was instrumental in helping Son raise the first Vision Fund of $100 billion, come as the latest setback for SoftBank. After WeWork’s stalled public share sale and the disappointing market debut of Uber last year, SoftBank has been widely criticized for its freewheeling investment strategy. Thanks mostly to the missteps of the Vision Fund, Tokyo-listed SoftBank has reported two disappointing quarters, including a massive operating loss of $9 billion for the July-September period. Having exhausted its first Vision Fund, SoftBank is now struggling to raise capital for its second Vision Fund, which was earlier planned to be even bigger than the first. That looks like a pipe dream now.
Earlier this month, it emerged that Elliott Management, a famous activist investment firm, had taken a roughly 3% stake in SoftBank. Elliott is demanding changes to the SoftBank board and a stock buyback to improve the transparency of its Vision Fund, according to media reports.
At the Vision Fund, Misra has been under increasing scrutiny. Two weeks ago, the Financial Times reported that Misra is in talks to raise a large hedge fund to invest in publicly traded companies. Even though the Vision Fund invests in private technology companies, Misra’s efforts could raise questions of conflict of interest. Additionally, given the crisis at Vision Fund, its executives are expected by investors to focus all their energies on portfolio companies and finding capital for the second fund, rather than devising other investment vehicles.
The 58-year-old Misra is a key aide of SoftBank CEO Son. An alumnus of IIT Delhi and the Massachusetts Institute of Technology, Misra is a veteran in financial services, having worked at UBS and Merrill Lynch, besides others. As a senior banker at Deutsche Bank in the early 2000s, Misra helped Son recover from the dotcom bust that had nearly claimed the SoftBank CEO’s career.
According to a 2018 Financial Times profile, Son met Misra many years later in 2014 in Italy. The occasion: the wedding of Arora and Ayesha Thapar, an heiress of the Thapar family of Kolkata. Misra who had just joined a private equity firm, left to join SoftBank in November 2014, a few months after the meeting with Son.
The increasing scrutiny faced by Misra is reminiscent of Arora’s situation before he was forced to leave SoftBank. In June 2016, Arora resigned as SoftBank COO after a wave of negative publicity that included charges of conflict of interest and unethical behaviour.
In October 2016, four months after Arora’s abrupt exit, SoftBank announced that it would raise Vision Fund a technology investment fund of up to $100 billion. A few months later, Misra was named the head of the fund.