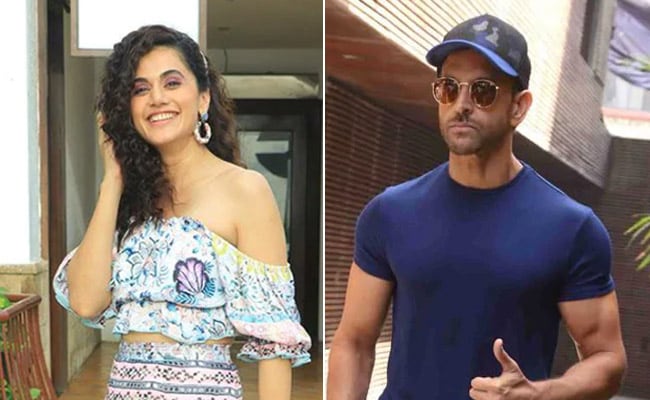 "I really wanted to click a selfie with him," said TaapseeHighlightsTaapsee recently made an appearance on The Kapil Sharma Show She talked about her favourite actor Hrithik Roshan "I will wait and conspire that we do a movie together," she said on the sNew Delhi: Taapsee Pannu, a self-confessed fan of Hrithik Roshan, really wants…

“I really wanted to click a selfie with him,” said Taapsee

Taapsee Pannu, a self-confessed fan of Hrithik Roshan, really wants to work with the actor and for that, she is even “conspiring” to ensure that she will get to do a film with him, reported news agency IANS. The actress recently made an appearance on The Kapil Sharma Show and revealed her masterplan there. When host Kapil Sharma asked Taapsee Pannu if she has ever asked any actor to get a picture with her, the actress replied: “I am a fan of Hrithik Roshan. I went up to him on Dia’s (her Thappad co-star Dia Mirza) birthday and confessed that I really wanted to click a selfie with him. But instead of clicking a picture right now, I will wait and conspire that we do a movie together and I’ll take my chance then!” reported IANS.

The actress also revealed on the show that she “admires” the country’s sportspersons a lot. “I really admire our country’s sports personalities, too, and I would love to click pictures with them. They are real heroes of our nation,” Taapsee told Kapil Sharma, reported IANS.

On the work front, Taapsee Pannu is busy promoting her upcoming film Thappad, which is set to hit the screens on February 28. Other than Taapsee and Dia Mirza, the film also stars Pavail Gulati, Ram Kapoor, Tanvi Azmi, Kumud Mishra and Manav Kaul. The story of Thappad is about domestic violence and Pavail Gulati features as Taapsee’s husband in the film. The actress also has Haseen Dillruba and Looop Lapeta in the pipeline.