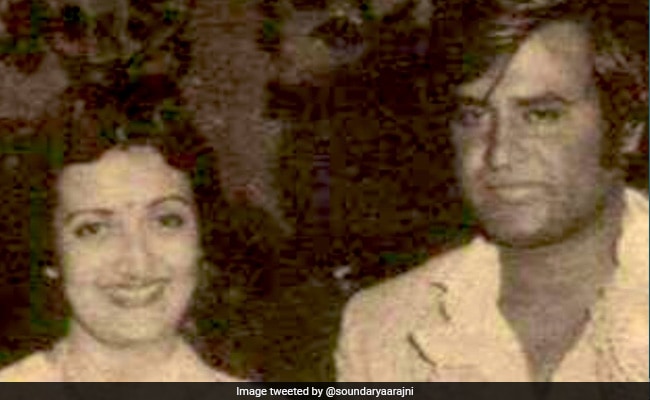 For superstar Rajinikanth and his wife Latha, love is ageless and timeless. The couple celebrated 39 years of togetherness on Wednesday and to make the occasion extra memorable, their filmmaker daughter Soundarya Rajinikanth delighted us with a rare throwback picture of the couple and it is a pure bliss. In the photograph, Rajinikanth, who married Latha in 1981, can be seen posing with her for the cameras. Going by the post, it appears that the picture was clicked in the late Eighties or early Nighties. Sharing the million-dollar throwback photograph on Twitter, Soundarya wished her “Amma and Appa” like this: “Love you endlessly, Amma and Appa. Happy anniversary.”

Rajinikanth and Latha’s love story is no less than a fairy tale. The couple apparently met and fell in love when Latha Rangachari interviewed the star during the filming of the 1981 movie Thillu Mullufor her college magazine. They later married on February 29 in Andhra Pradesh. During the Eighties, Latha worked as a playback singer in Tamil cinema. She has also produced two films – Maaveeran and Valli. Latha has also contributed to Rajini 25 (1999), a musical album that commemorated 25 years of her husband’s career.

Rajinikanth and Latha’s elder daughter Aishwaryaa is married to actor Dhanush while their younger daughter Soundarya is married to industrialist Ashwin Ramkumar. Last year also, Soundarya, who has directed her father in Kochadaiiyaan, shared a throwback picture of her parents on their wedding anniversary. Take a look:

The couple that sets the benchmark for #TheUltimateCoupleGoals love u mummy and daddy !!! #HappyAnniversarypic.twitter.com/mglaO3eGhi

On the work front, Rajinikanth was last seen in Darbar. His next release Annaatthe, directed by Siva, is expected to open in theatres by the end of this year.