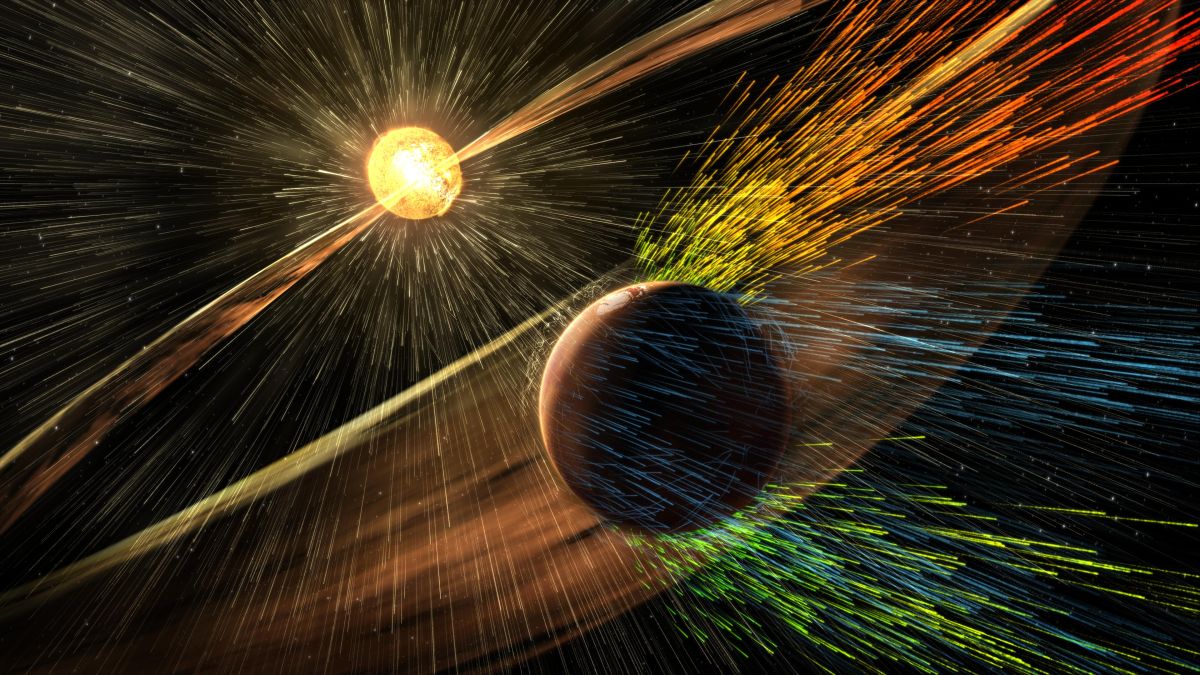 Home News Science & Astronomy An artist's impression of the effect of a solar storm on Mars, as charged particles strip away it atmosphere. (Image: © NASA/GSFC) The magnetic field in one zone on Mars is about 10 times stronger than scientists expected, and it's changing rapidly.New data gathered from NASA's InSight lander, which has… 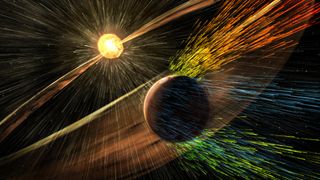 An artist’s impression of the effect of a solar storm on Mars, as charged particles strip away it atmosphere.

The magnetic field in one zone on Mars is about 10 times stronger than scientists expected, and it’s changing rapidly.

New data gathered from NASA’s InSight lander, which has been on the Red Planet for a little over a year now, shows that the planet’s magnetic field fluctuates rapidly. InSight is the first landing mission to carry a magnetic sensor, which allows it to measure these fields from up close.

“The ground-level data give us a much more sensitive picture of magnetization over smaller areas, and where it’s coming from,” lead author Catherine Johnson, a professor at the University of British Columbia and senior scientist at the Planetary Science Institute, said in a statement. “In addition to showing that the magnetic field at the landing site was ten times stronger than the satellites anticipated, the data implied it was coming from nearby sources.”

InSight is designed to collect data that helps scientists to reveal more about how rocky planets form by looking at the planet’s interior. Before the lander touched down in November 2018, magnetic fields were measured by satellite and often averaged a distance from the epicenter that was more than 90 miles across.

Billions of years ago, Mars used to have a global magnetic field, but it shut down for reasons that are still unknown, about 4 billion years ago, leaving the atmosphere unshielded to radiation and causing it to bleed over time into space. Any residual fields are likely coming from older rocks buried several feet or miles underneath the planet’s surface, these new results from InSight suggest. The team plans to continue to study Mars using InSight to better identify what different types of rocks there are and where they are.

There is also some strange data that InSight has collected, revealing things like fluctuations in the magnetic field around midnight, which are likely related to how the solar wind and IMF move around Mars, inducing electrical currents and magnetic fields on the planet. Future observations will help to inform researchers exactly why this is happening, with InSight providing data from the surface at the same time that NASA’s Mars Atmosphere and Volatile Evolution (MAVEN) examines the atmosphere above the landing site.

“Because all of our previous observations of Mars have been from the top of its atmosphere or even higher altitudes, we didn’t know whether disturbances in solar wind would propagate to the surface,” said Johnson. “That’s an important thing to understand for future astronaut missions to Mars.”