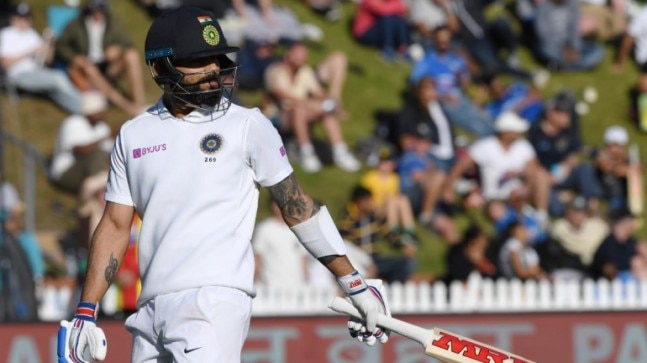 The ongoing tour of New Zealand has been quite a see-saw ride for Virat Kohli's men. It was only a few weeks ago when the India skipper and his New Zealand counterpart were 'talking about life' along the boundary ropes.Virat Kohli was quick to defend New Zealand and their affable captain Kane Williamson when they…

The ongoing tour of New Zealand has been quite a see-saw ride for Virat Kohli’s men. It was only a few weeks ago when the India skipper and his New Zealand counterpart were ‘talking about life’ along the boundary ropes.

Virat Kohli was quick to defend New Zealand and their affable captain Kane Williamson when they were whitewashed 5-0 in the T20I series.

However, it has gone downhill from thereon. From sharing a laugh with his opposition skipper to identifying ‘people who want to get into their heads’, Virat Kohli has let his emotions do the talking.

More often than not, Virat Kohli’s post-match interactions give us a hint of the state of the Indian team. Losses don’t quite make it easy for people on ‘the outside’ for the India skipper sees them as deterrents who try and keep the team ‘in a mentally bad space’.

It’s the job of the critics to ask tough questions and pinpoint the flaws in the side. For a side that takes pride in calling itself ‘the best Indian team in the last 15 years’, questions are going to come thick and fast if results aren’t doing justice to that tag.

“This is going to be the biggest of them all. Every team wants to make it to the final at Lord’s. And we are not any different.”

Virat Kohli is desperate for success in the ICC World Test Championship https://t.co/ngtQs6MK33

It was hard to understand Virat Kohli calling the ODI series ‘irrelevant’ after India lost it 0-3 to New Zealand.

As Sunil Gavaskar pointed out, no international assignment for India can be called irrelevant. When beating Australia after being 0-1 down or beating West Indies while coming back from behind in the ODI series at home last year was celebrated, why will an ODI series against World Cup finalists become irrelevant?

When did Virat Kohli stop caring about ODIs? When did they start to become irrelevant?

He still knew India had beaten Australia in ODIs in a ‘T20 World Cup year’. Does Kohli have to then answer why the ODI series win was celebrated with such enthusiasm?

For a team that aspires to be No. 1 across formats, ‘outside noise’ cannot be irrelevant. Its captain cannot come out and generalize criticism as ‘noise’, especially after a loss.

At a time when results in overseas Tests have been far from impressive, Virat Kohli can’t stop caring about what the fans and critics of the team think.

It was classic Virat Kohli at the press conference on Monday after India were handed a 10-wicket thrashing in the 1st Test of the ongoing series in New Zealand.

It was the same Virat Kohli who had a go at a reporter who said he doesn’t agree to the ‘best Indian team’ tag after a series loss in England.

This time, Virat Kohli said he doesn’t care about criticism. In fact, he went to the extent of saying ‘people’ are out there who are looking to affect the mindset of the team.

“1st things 1st, block all the noise from the outside. I think people want us to think that this is a massive loss and you try and make too much out of it so that we don’t quite go in with a clear mindset. People will try and get into your head, understanding you’re a top-quality side and you can beat any side anywhere.”

When you choose not to bat in what was an important 3-day practice game, when you have scored just 201 runs in 9 innings on an important tour, you can’t just stop caring.

It’s time the Indian skipper stops being selective when it comes to caring about ‘people’ and the ‘outside noise’.