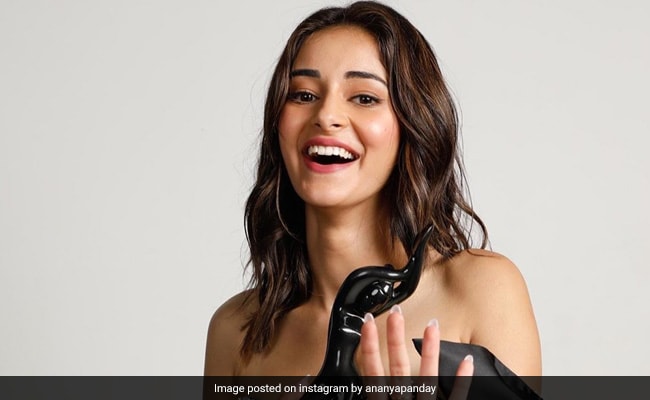 Ananya Panday shared this picture on Instagram. (courtesy: ananyapanday)HighlightsAnanya Panday said, "Winning a Filmfare Black Lady is a big deal for me" She was accompanied by her mother Bhavana Panday to the awards Earlier, Bhavana Panday had shared a picture of Ananya sleeping with herNew Delhi: Ananya Panday, who received Best Debut award at the…

Ananya Panday, who received Best Debut award at the 65th edition of Filmfare Awards for her performance in Student Of The Year 2, disclosed how she almost forgot her acceptance speech. In an interview with Mumbai Mirror, Ananya Panday said, “I had practiced it so many times, but when I went on stage I forgot everything.” The actress was accompanied by her mother Bhavana Panday to the award function, which was held in Guwahati. Ananya said that she “wished” her actor-father Chunky Panday, who was missing in action, “was there too,” and added, “Winning a Filmfare Black Lady is a big deal for me. My mom was there with me and how I wished dad was there, too. But I gave the trophy to him when I reached home.” She also revealed that her father suggested her to keep it in the living room so that, “the family could look at it the whole day.”

A proud Bhavana Panday shared a picture of Ananya as she slept holding the award with her. On the Instagram post, Bhavana wrote: “So proud of you my baby girl! Love you too much! Keep shining! Thank you!”

Take a look at the picture:

Student Of The Year 2 has been directed by Punit Malhotra. The film released in May 2019. Ananya Panday shared a glimpse of the award function on Instagram and wrote, “Grateful, blessed, honoured and humbled! Filmfare for Best Debut (female) 2020.” Thanking her entire team, she added, “This would be impossible without you guys, my family! Mama, Papa, Rysa (younger sister) You rock and last but definitely not the least – the audience and my supporters for giving me so much love – I’ll make u proud.”

Ananya Panday co-starred with Tiger Shroff and Tara Sutaria in Student Of The Year 2. She will next be seen in the film Khaali Peeli opposite Ishaan Khatter. The 21-year-old actress has another film in the pipeline (yet untitled) by filmmaker Shakun Batra co-starring Deepika Padukone and Siddhant Chaturvedi.