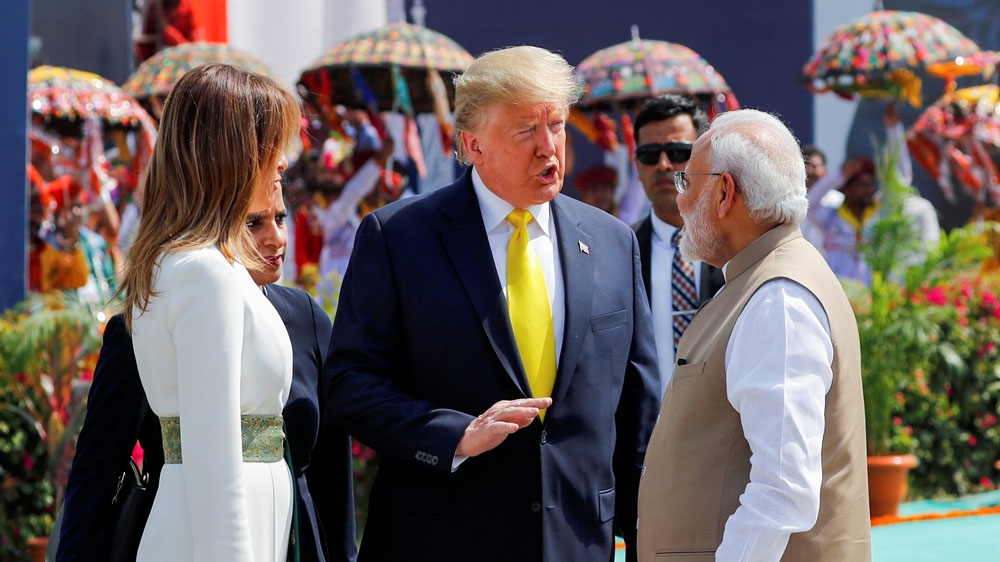 US President Donald Trump has addressed a huge rally at a mega cricket stadium on his maiden official visit to India that is big on photo opportunities but likely short on substance. Trade tensions have grown between the United States and India, the world's fifth-biggest economy, as Trump's "America First" drive collides with Prime Minister…

US President Donald Trump has addressed a huge rally at a mega cricket stadium on his maiden official visit to India that is big on photo opportunities but likely short on substance.

While sharing concerns about China and deepening their defence ties, India has bristled at Trump’s offer to mediate in the Kashmir dispute with Pakistan, and at unease in the US over a citizenship law criticised as anti-Muslim.

The two leaders then headed to a new cricket stadium – the biggest in the world – where Trump heaped praise on Modi as an “exceptional leader, a great champion of India” in front of a crowd of nearly 100,000.

“America loves India. America respects India, and America will always be faithful and loyal friends to the Indian people,” Trump told the ecstatic crowd, many in Trump-emblazoned baseball caps.

Name-checking Bollywood films and Indian cricketers, Trump – with an eye on elections in November – paid tribute to the four-million-strong Indian-American diaspora as “truly special people”.

“President Trump’s visit opens a new chapter in our relationship – a chapter that will document the progress and prosperity of the people of America and India,” Modi said.

“The whole world knows what President Trump has done to fulfil the dreams of America.”

Excited spectators had queued since 4am (22:30 GMT, Sunday) for the “Namaste Trump” rally, reciprocating a “Howdy Modi” event in Houston last year where Trump likened Modi to Elvis Presley.

Workers rushed to finish the stadium and a wall that locals said was to hide a slum. Stray dogs, cows and monkeys were also kept away.

“Events like these will galvanise people to start to cooperate in new initiatives,” said Pramit Maakoday, an Indian-American at the stadium.

Trump praised India’s economy and drew loud applause when he said Washington and New Delhi are “united in our iron-clad resolve to defend our citizens from the threat of radical Islamic terrorism”.

Later on Monday, Trump and Melania – dressed in an off-white jumpsuit and Indian sash alongside her husband in his usual suit and tie – flew to the iconic Taj Mahal for sunset before the main official talks on Tuesday.

Parts of the white marble “jewel of Muslim art”, according to the UNESCO, were given a mud-pack facial to remove stains, while efforts were made to lessen the stench of the adjacent river.

Behind the platitudes and blossoming bromance between the two leaders lies a fraught relationship worsened by the trade protectionism of both governments.

Trump has called India the “tariff king”, and said before his visit that Asia’s third-largest economy had been “hitting us very, very hard for many, many years”.

Rather than a wide-ranging trade deal, reports said, Trump and Modi may instead sign smaller agreements covering products such as Harley-Davidson motorcycles and US dairy products.

“We are in the early stages of discussions for an incredible trade agreement,” Trump told the rally, calling Modi a “very tough negotiator”.

The two men were expected to sign a number of defence deals during the visit, and to discuss the supply of six nuclear reactors.

Russia, however, remains India’s biggest supplier in arms, with New Delhi having agreed to buy Moscow’s $5.4bn S-400 missile defence system despite the threat of US sanctions.

The US has pressured India to stop buying Iranian oil, while US businesses have raised concerns over New Delhi’s plans to force foreign firms to store Indian consumers’ personal data inside the country.

In the US, India has faced criticism over its clampdown in Indian-administered Kashmir and the recently passed citizenship law that has led to ongoing protests across the nation, including in New Delhi on Sunday and Monday.

A senior US administration official told reporters Trump would raise concerns about religious freedom in the Hindu-majority nation during the trip, “which is extremely important to this administration”.