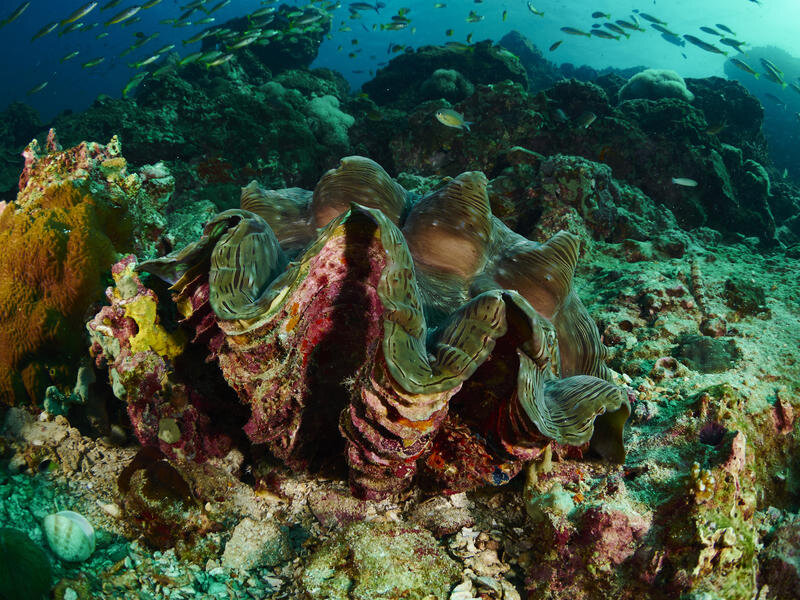 Giant clams, the largest type of invertebrate included in the study, survive today on tropical reefs in the Pacific and Indian Oceans, but many species from this group are under threat. “People collect them to carve the shells, as with elephant ivory, and to eat the clam because of its supposedly aphrodisiac-like properties,” says paleobiologist…

A new fossil study from Stanford University shows extinction was unexpectedly common among smaller sea creatures in the deep past.

The research, published Jan. 30 in the journal Paleobiology, suggests evolutionary winners during most of the history of animal life included not only true behemoths of the sea, such as Jurassic fish as long as a bus, but also species who were giants of their kind.

“Our study shows there are macroevolutionary forces that tend to favor the survival of larger species,” said Noel Heim, a paleobiologist at Tufts University who worked on the analysis as a researcher in the lab of Stanford geological sciences professor Jonathan Payne.

The findings contrast with extinction patterns observed on land and in today’s oceans. “Our findings suggest that the controls on extinction risk for marine animals across evolutionary time were quite different from those that are operating in the current extinction crisis, but were consistent across time and distantly related groups of animals,” Payne said.

Scientists have long debated how and why animal size and extinction risk were related in the deep past, often forming theories based on examples from land-based ecosystems. Payne has studied the question from different angles for more than a decade, mostly focusing on the marine environment. His teams have demonstrated that the size bias of extinction threats in modern oceans does not exist in the pattern of extinction of fossil marine mollusks and fishes spanning the past 66 million years, and that marine animals evolved toward larger sizes over the past 500 million years.

The new study examines a far broader swath of the tree of life, from huge bony fish and giant clams down to crustaceans and sea snails tinier than poppy seeds. Payne and Heim conducted a statistical analysis of 251,124 fossil records, including creatures belonging to 9,408 groupings known as “genera,” one taxonomic level higher than species. They chose the largest specimen in each of these genera to represent its kind. Then they analyzed extinction and survival patterns for three long chunks of time between 485 million years ago and the present day.

“People might think paleontology looks like a rugged outdoors person battling the wilderness to extract fossils from the Earth,” Heim said. “In our case, we went to the library to extract data then wrote computer code to analyze it.”

They found disproportionate losses among smaller creatures, such as those belonging to a group of bivalves known as Pectinida. The smallest of these distant sea-scallop relatives, pancake-thin and narrower than the palm of your hand, perished in the later years of the Cretaceous period, which ended when a dinosaur-killing asteroid crashed to Earth 65 million years ago. Related scallop-like species whose bodies could grow to more than twice that width and 10 times the volume, survived.

Filling in the gaps

The study also addresses nagging concerns that perhaps scientists until now have counted fossils in a way that makes smaller species appear to be rarer and more extinction-prone than they really were; or that perhaps body size has been far less important for survival than range, which happens to be bigger for bigger animals.

Paleontologists know that the fossil record has problematic gaps when it comes to smaller species—due partly to the allure of big fossils, and partly to the technical challenge of tracking down evidence of the ocean’s smallest animals millions of years after they perished.

“Their shells tend to be destroyed prior to burial and fossilization,” Payne explained. “Even if preserved in rocks, smaller shells are often more difficult to see in the field and require greater skill and precision to prepare them in ways that enable identification.”

The study confirmed that larger genera do tend to have broader geographic range, and that better techniques for preparing and magnifying small fossils have allowed scientists to begin filling in gaps where smaller species remain underrepresented. Yet neither of these facts accounts statistically for the bias in extinction against smaller animals evident in every era over the past 485 million years.

“The biggest surprises for me were finding that neither poor sampling nor narrower geographic ranges of smaller genera explained the statistical association of body size with extinction risk,” Payne said.

The precise processes underlying the pattern of higher extinction risks for smaller ocean animals remains unclear. Yet its existence underlines the extraordinary nature of threats facing ocean animals today. So many species are now in peril that scientists warn losses may reach the scale of a mass extinction—only the sixth in nearly half a billion years.

It’s a crisis that fuels efforts by Payne’s team and others to identify what drives extinction risk, and somehow quantify how species died off in the deep past.

“The fossil record is our only archive of past extinction events,” Payne said. It allows researchers to examine directly which biological traits tend to lead to higher extinction risk under different circumstances, whether in the wake of an asteroid impact or volcanic eruption, or amid global warming.

Just as valuable are the insights scientists can glean from fossils about long-term recovery. “The bad news is that recovery is a slow process, taking hundreds of thousands to millions of years,” Payne said. “This finding adds substantial urgency to our efforts to conserve species and ecosystems before extinction occurs.”