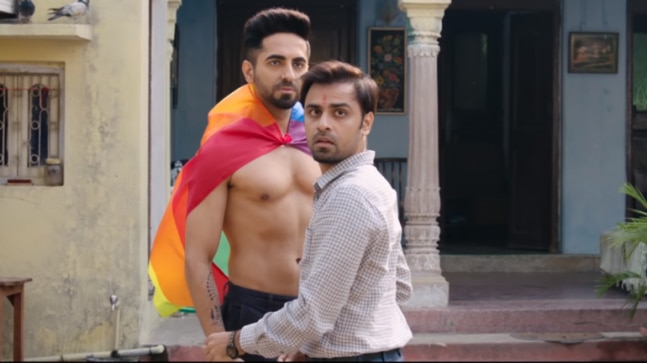 You don’t choose to fall in love, it chooses you. And the choice is free of cast, creed, colour, age or gender. This is the central idea behind the Ayushmann Khurrana and Jitendra Kumar-starrer Shubh Mangal Zyada Saavdhan. After normalising the issue of erectile dysfunction in Shubh Mangal Saavdhan (2017), Ayushmann is back with another…

You don’t choose to fall in love, it chooses you. And the choice is free of cast, creed, colour, age or gender. This is the central idea behind the Ayushmann Khurrana and Jitendra Kumar-starrer Shubh Mangal Zyada Saavdhan. After normalising the issue of erectile dysfunction in Shubh Mangal Saavdhan (2017), Ayushmann is back with another film based on a social issue, served on a comedy platter.

Shubh Mangal Zyada Saavdhan takes us to Delhi, where Kartik Singh (Ayushmann) and Aman Tripathi (Jitendra) are in a happy live-in relationship. Trouble follows when Aman’s father, Shankar Tripathi (Gajraj Rao), gets to know of their relationship and vows to tear the couple apart. How Aman and Kartik fight for their love forms the rest of the story.

“Theek hojayega tu,” says Sunaina, Aman’s mother (Neena Gupta) in Shubh Mangal Zyaada Savdhaan, echoing the voice of a society that terms anything that doesn’t go by the rulebook a form of ‘disease’.

Since childhood, Kartik and Aman are fighting battles every day, to live in a society that firmly believes that love can happen only between a man and a woman. From Kartik getting beaten up as a child by his friends because they didn’t like his hair colour to Aman suffocating under his family’s OTT ‘love’ to a point that crippled him to introspection, the film establishes that the two are different from the rest. Which clearly makes existence a challenge. They expect some respite from the so-called ‘educated’ people who might understand that sexuality is a natural trait.

“Tere papa padhe likhe hain, samajh jayenge,” says Kartik, but his hopes are soon crushed when Shankar Tripathi tries to pluck him from Aman’s life and seeks the help of a priest for his sons ‘treatment’.

One thing that stands out in Shubh Mangal Zyada Saavdhan is the attention it pays to details. Kartik’s super-chic nose ring, bright pink scarf at the family wedding, the rainbow cape he wears while stating that Shankar Tripathi is suffering from Homophobia, and a copy of Real Love that he reads while Aman talks to his father about his relationship, are some of the many examples that are hard to miss.

The film doesn’t only focus on homosexuality and homophobia, but lightly touches upon other issues as well. Pankaj and his wife are in a loveless marriage as both confess to living in ‘parts’. While Pankaj had to let go of Rani, Sunaina had to leave Kumar and both miss their respective exes. Their marriage wasn’t a product of love; but of family pressure.

On the other hand, we have Rajini (Maanvi Gagroo), Aman’s cousin who struggles to find a groom and is more like a burden on the family who needs to be married-off quickly. She is 27, and her parents are desperate to have her married, so much so that they are happy when an aged man agrees to accept their daughter’s hand. Because that is what the priority is, right? Being married, at the ‘right’ age. “Shaadi na hogayi, antibiotic ka course hogaya ki poori karni zaroori hai,” says Kartik, and we agree.

Although the film has a strong concept, the story and its treatment could have been better. The first half moves at a moderate pace while the second half appears to be a bit dragged.

The film makes us laugh our hearts out while highlighting such a sensitive issue, but it lacked the intensity that was needed in certain moments. The scenes where Aman finally stands up to his father demanded more gusto.

The film scores full marks on the humour factor as some scenes will leave you in splits (watch out for the Aashiqui 2 reference! Ayushmann and Jitendra actually did it better than Shraddha Kapoor and Aditya Roy Kapur). Yes, there are jokes that feel out of place at times, but they are said by the actors with such honesty that it is acceptable.

Coming to the performances, Ayushmann gets into the skin of his character and is perfect as Kartik. A fearless, dedicated man who will stop at nothing to get the love of his life. He is the very soul of the film and gets all the expressions right. Be it riding pillion with Jitendra on the bike and leaning on him dreamingly, or saying “Tu to strong baby hai mera,” Ayushmann will make you fall in love with him. If you’re a fan, you will love him more. The actor has the same honesty he had in the 2017 film, Shubh Mangal Saavdhan.

Jitendra Kumar fits the bill, and how. He is scared when he should be, stands up with his lover when needed to and often makes us chuckle with his innocence. He plays the perfect partner to Ayushmann and the seemingly ‘ideal’ son to Neena and Gajraj.

Jaa Simran jaa, dekhle ye picture, we say. (Watch the film and you will get the reference).

We’re going with 3 stars out of 5 for Shubh Mangal Zyada Saavdhan.