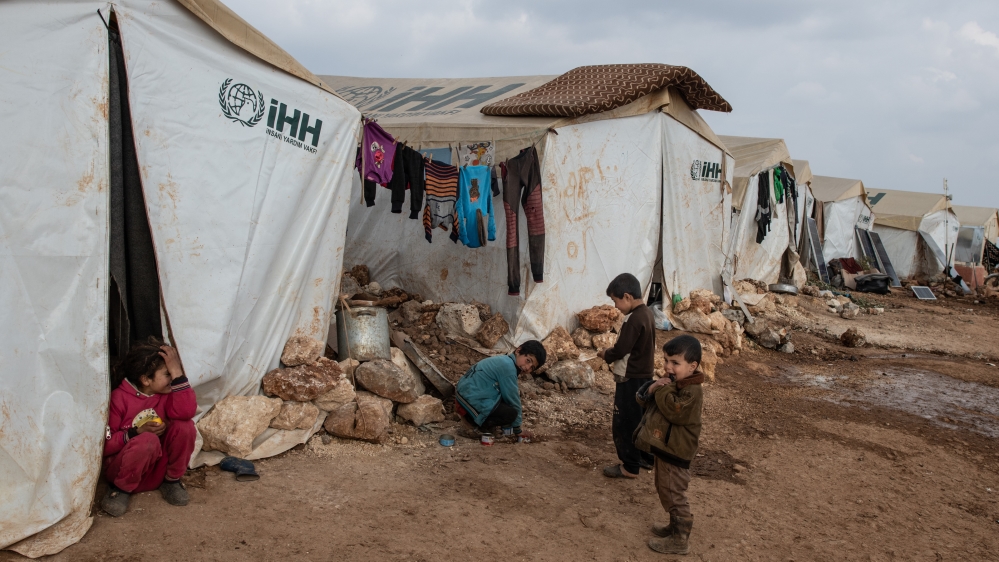 Hundreds of thousands of Syrians fleeing a fierce government push are being squeezed into ever-smaller areas near Turkey's border under horrendous conditions, including below-freezing temperatures that are killing babies and children, the United Nations humanitarian chief has warned. Addressing the UN Security Council, Mark Lowcock said on Wednesday the "unfolding humanitarian catastrophe" in Syria's northwestern Idlib province had…

Hundreds of thousands of Syrians fleeing a fierce government push are being squeezed into ever-smaller areas near Turkey’s border under horrendous conditions, including below-freezing temperatures that are killing babies and children, the United Nations humanitarian chief has warned.

Nearly 900,000 people, more than half of whom are children, have fled their homes since December 1, when Russian-backed Syrian government forces pressed ahead with a military offensive to push out opposition fighters from their last stronghold in the country.

“They are moving into increasingly crowded areas they think will be safer,” Lowcock said.

“But in Idlib, nowhere is safe.” Lowcock said hostilities are now all around areas densely populated with “terrified” people who have fled “on foot or on the backs of trucks”. They are now in Dana and Sarmada, in the direction of the shut Bab al-Hawa border crossing with neighbouring Turkey, in what has been the biggest wave of displacement since the start of the war nearly nine years ago.

Nearly 300 civilians have been killed in attacks this year in the northwest region, with 93 percent of the deaths caused by Syrian and Russian forces, according to the UN.

Earlier on Wednesday, UN special envoy for Syria Geir Pedersen echoed Secretary-General Antonio Guterres‘ alarm at the rapid deterioration of the humanitarian situation “and the tragic suffering of civilians”.

“Hostilities are now approaching densely populated areas such as Idlib city and Bab al-Hawa border crossing, which has among the highest concentration of displaced civilians in northwest Syria and also serves as a humanitarian lifeline,” he said.

Pedersen warned, “The potential for further mass displacement and even more catastrophic human suffering is apparent, as an increasing number of people are hemmed into an ever-shrinking space.”

He said Russia and Turkey, as sponsors of a fragile ceasefire in Idlib, “can and must play a key role in finding a way to deescalate the situation now”, though meetings between delegations of the two countries in Ankara, Munich and Moscow in recent days and contacts between the two presidents have not produced results.

“To the contrary, public statements from different quarters, Syrian and international, suggest an imminent danger of further escalation,” Pedersen said.

Al Jazeera’s Mike Hanna, reporting from the UN headquarters in New York, said Pedersen the statements at the Security Council reflected an “exceedingly bleak” situation unfolding on the ground in northwest Syria.

“What we heard today is something of deep gloom and of the greatest concern for the Security Council,” he said. The council’s meeting comes as Turkey and Russia, which back opposing sides in the conflict but have collaborated towards what they say is a political solution to the nearly nine-year war, exchanged warnings.

“An operation in Idlib is imminent,” Turkish President Recep Tayyip Erdogan told his party’s legislators in Parliament on Wednesday. “We are counting down, we are making our final warnings”.

Ankara, which supports several rebel groups in northwest Syria, has been outraged since recent Syrian government attacks in Idlib province killed 13 Turkish military personnel in two weeks. It is also eager to prevent another flood of refugees into its territory adding to the 3.6 million Syrians it already hosts.

Responding to Erdogan’s comments, Russia – the main ally of Syrian President Bashar al-Assad – said any operation against Syrian forces in Idlib would be the “worst scenario”.

Al Jazeera’s Hashem Ahelbarra, reporting from Hatay at the Turkey-Syria border, said both sides “haven’t been able to make a breakthrough” in talks.

He added that next week would be “crucial” in determining whether Ankara will step up its operations in Idlib.

Erdogan has repeatedly said Syrian government forces in Idlib must pull back behind a line of Turkish observation posts by the end of February, warning that if they did not do so, Ankara would drive them back.

Turkey has set up 12 observation posts in Idlib as part of a 2018 deal with Russia.

Syrian troops have reconquered swaths of Idlib and retaken the key strategic M5 highway connecting the country’s four largest cities, as well as the entire surroundings of Aleppo city for the first time since 2012.

In rare remarks earlier this week, al-Assad pledged to continue the offensive, saying the war was not yet over but a “complete victory” was in sight. Damascus and Moscow maintain the military operation in Idlib is aimed at driving out “terrorists” from the region.