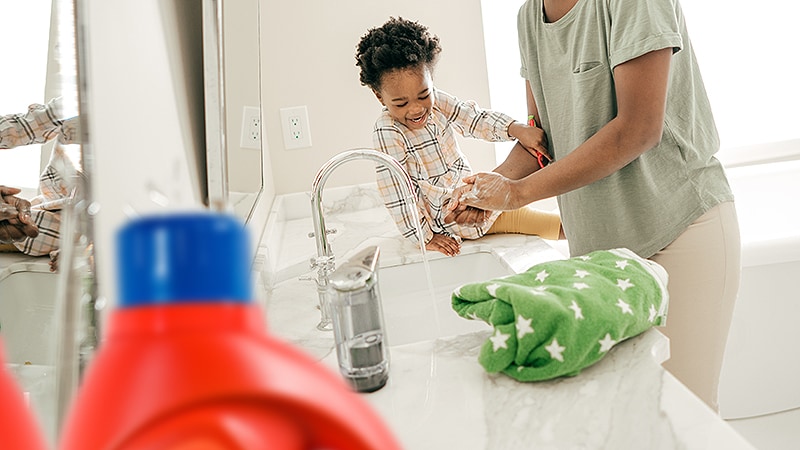 Keeping a clean house may protect against the spread of germs, but early exposure to household cleaning agents could have an unwanted effect on young children, according to data from a Canadian birth cohort. Infants whose caregivers reported frequent use of household cleaning products when the child was 3 to 4 months of age were…

Keeping a clean house may protect against the spread of germs, but early exposure to household cleaning agents could have an unwanted effect on young children, according to data from a Canadian birth cohort.

However, there was no significant association between exposure to cleaning agents and atopy, suggesting that the observed respiratory vulnerabilities may result from inflammatory rather than allergic processes, note Jaclyn Parks, a graduate student at Simon Fraser University in Vancouver, British Columbia, Canada, and colleagues.

Because most of the evidence linking exposure to cleaning products and respiratory problems comes from adult populations, the investigators sought to analyze the effects in children. “Young children, who spend 80%–90% of their time indoors in early life, are especially vulnerable because of their increased respiration rate and proximity to the ground, which increases gaseous and dermal exposures,” they write.

Parks and colleagues derived frequency of use (FUS) scores for 2022 children for whom complete exposure and outcome data were available. The data were based on the caregivers’ responses to how often they’d used each of 26 cleaning products. The researchers stratified the population on the basis of FUS scores. They found that 666 children came from households with low use of cleaning products, 700 came from moderate-use households, and 656 came from high-use households.

A multivariable analysis showed a higher proportion of all outcomes except atopy in children with higher exposure, after adjusting for the following factors: parental history of asthma, the child’s sex, ethnicity, household income, city/location, prenatal or early-life smoking exposure, pet ownership, and visible mold in the home. The investigators used multivariable logistic regression models to examine the relationship between the FUS and each of the respiratory outcomes.

Regarding specific categories of cleaners, the investigators found that the risk for respiratory problems was higher when liquid or solid air fresheners, spray air fresheners, plug-in deodorizers, dusting sprays, antimicrobial hand sanitizers, and oven cleaners were used frequently compared with infrequent use.

“A proposed mechanism for our findings is that chemicals in cleaning products damage the respiratory epithelium by affecting inflammatory pathways of the innate immune system rather than allergic pathways,” the authors write. They note that adult studies indicate that household cleaning products may target the respiratory epithelium and that long-term exposure may lead to asthma and recurrent wheeze.

Although the study does not prove causation, clinicians should inform parents about the risks associated with cleaning products, the authors write. From a research perspective, studies on the benefits of alternatives to spray and aerosol cleaners, the influence of cleaning products on the microbiome, and the identification of better methods for measuring exposure are warranted, they note.

This study “contributes to a growing concern about the likely irritative effects of commonly used cleaning products on the respiratory system,” Elissa M. Abrams, MD, from the Section of Allergy and Clinical Immunology, Department of Pediatrics, University of Manitoba in Winnipeg, Canada, writes in an accompanying commentary.

Because asthma develops early in life and progresses over time, there is only a “small window in early childhood” during which preventive efforts can likely influence its course. “Therefore, studies that identify avoidable factors to inform asthma prevention efforts are of paramount importance. The linked study points to small preventive changes that could be considered, especially among families of children at risk of asthma,” Abrams writes.

The current underregulation of household cleaning products in the United States and Canada, including the absence of a requirement that all ingredients be listed on the product label, may also contribute to exposure risks, inasmuch as it limits consumer awareness around potential toxicities, Abrams explains.

Abrams says more research is needed because data regarding longer-term outcomes may lead to a better understanding of the association. “It may be that there is a subtype of irritant asthma that is largely preventable, which means — as cleaning products are ubiquitous — that a widespread public health education campaign may be required to bolster prevention,” she writes.

Abrams concludes, “[T]he study points to a larger issue within the field, which is the identification of early life exposures that may modify the risk of childhood asthma.”

The study was funded by the Canadian Institutes of Health Research and the Allergy, Genes and Environment Network of Centers of Excellence. The study authors and Abrams have disclosed no relevant financial relationships.