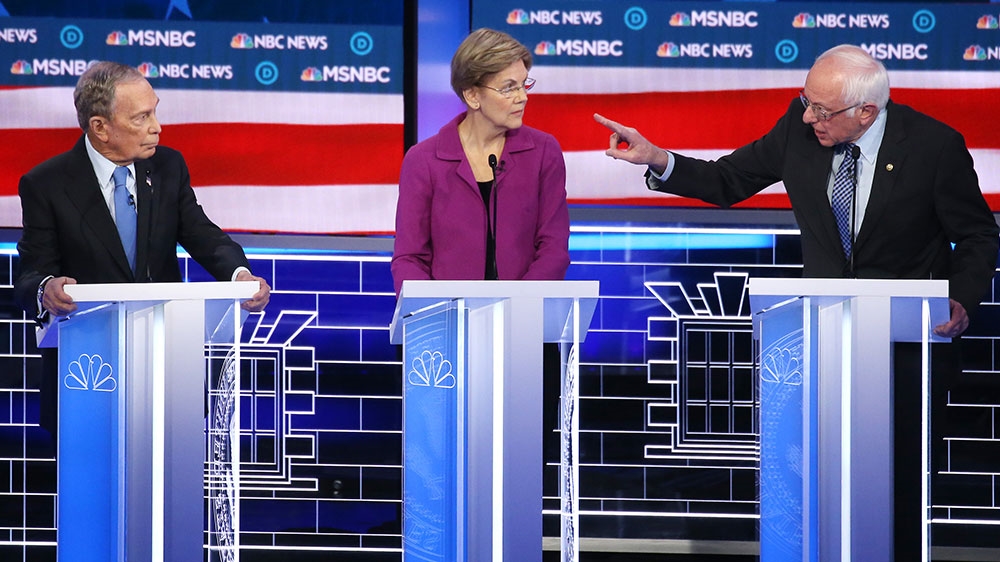 Six US Democratic presidential candidates came out swinging in all directions on Wednesday night, but billionaire Michael Bloomberg and Senator Bernie Sanders were the main targets. It was Bloomberg's first debate since announcing his candidacy late last year, and for Americans, it was their first unscripted look at the media mogul and former New York…

Six US Democratic presidential candidates came out swinging in all directions on Wednesday night, but billionaire Michael Bloomberg and Senator Bernie Sanders were the main targets.

It was Bloomberg’s first debate since announcing his candidacy late last year, and for Americans, it was their first unscripted look at the media mogul and former New York City mayor whose campaign until now has been fuelled by hundreds of millions of dollars of self-funded television advertisements and carefully choreographed personal appearances.

“We’re running against a billionaire who calls women fat broads and horse-face lesbians,” Warren said. “And, no, I’m not talking about [President] Donald Trump, I’m talking about Mayor Bloomberg.”

“Democrats take a huge risk if we just substitute one arrogant billionaire for another,” she added. Bloomberg, who entered the race in November and is skipping the first four early-voting states in February to focus on later nominating contests in March, said he did not inherit his money but made it as a businessman.

“I’m spending that money to get rid of Donald Trump – the worst president we’ve ever had. And if I can get that done, it will be a great contribution to America and to my kids,” he said.

The debate also marked an important test for Sanders, a self-described democratic socialist who has emerged as the frontrunner in the Democrats’ fight for the nomination to take on Trump in November. Sanders also came under heavy fire by his challengers who attacked him on everything from democratic socialism to questions over the price tag for his Medicare-for-all plan.

Buttigieg called Bloomberg and Sanders “the two most polarising figures on this stage”.

Wednesday night’s debate in Las Vegas, Nevada, came just three days before the state holds its caucuses, which will be closely watched after Iowa’s caucuses earlier this month resulted in chaos.

Here’s a look at what the six hopefuls said on some of the top issues in one of the liveliest debates of this campaign season.

Stop-and-frisk gave New York City police wide authority to detain people they suspected of committing a crime, and Bloomberg aggressively pursued the tactic when he first took over as mayor in 2002. Under the programme, New York City police officers made it a routine practice to stop and search multitudes of mostly black and Hispanic men to see if they were carrying weapons.

Biden said “the fact of the matter is [Bloomberg] has not managed his city very well” when he was mayor of New York City. “He didn’t get a whole lot done,” Biden said. “He had stop-and-frisk – throwing close to five million young African American men up against the wall – and when we came along in our administration, President [Barack] Obama and I said we’re going to send a mediator to stop it, he said that’s unnecessary.”

Bloomberg said the controversial policy represents the singular thing he’s “really worried about and embarrassed about” from his time as New York City mayor. He said he has repeatedly apologised for the policy.

But Biden said: “It’s not whether you apologise or not, it’s the policy. The policy was abhorrent. And it was, in fact, a violation of every right people have.”

Klobuchar was also asked to defend her record on criminal justice with moderators asking how voters of colour should trust her judgement after her handling of the case in which an African American teen was sentenced to life after a flawed police investigation. Questions about the Minnesota senator’s oversight of the case emerged after an Associated Press news agency investigation into the case of Myon Burrell, who was 16 when he was apprehended in the 2002 death of an 11-year-old girl.

Klobuchar said that of the three people convicted in the case, one “was investigated by a journalist and I think it’s very important that that evidence come forward”.

Bloomberg also came under fire for past comments about women.

The billionaire had previously been accused of fostering a hostile work environment for some female employees.

Bloomberg defended his company, saying it was ranked among the highest for women to work now. But his challengers questioned how genuine he was and whether voters could trust the former mayor given that some women who have alleged sexism at his company have been silenced due to non-disclosure agreements they signed.

“I hope you heard what his defence was: ‘I’ve been nice to some women’,” Warren said.

“That just doesn’t cut it. The mayor has to stand on his record and what we need to know is what’s lurking out there,” she added. “This is not just a question of the mayor’s character. This is also a question about electability. We are not going to beat Donald Trump with a man who has who knows how many non-disclosure agreements and the drip, drip, drip of stories of women saying they have been harassed and discriminated against.” Bloomberg said he has “no tolerance” for sexist behaviour and that he saw the agreements in question as consensual and not up to him to dissolve.

He went on to say that none of the agreements “accuse me of doing anything other than, maybe they didn’t like a joke I told”, a response met with boos from the debate audience.

Several Democratic presidential contenders clashed over whether enormous wealth accumulation is un-American or something that should merely be subject to equitable tax rates.

Asked about Sanders’s tweet that “billionaires should not exist”, Klobuchar she supported capitalism but also an appropriate tax rate on wealth, unlike what she felt had been promoted and signed by Trump. When Sanders argued that billionaires pay an unfairly low tax rate compared with the middle class,  Bloomberg asked: “Why do you complain? Who wrote the code?”

Sanders said the US has a “grotesque and immoral distribution of wealth and income”, noting that Bloomberg “owns more wealth than the bottom 125 million Americans”.

“We are giving a voice to people who would say we are sick and tired of billionaires, like M. Bloomberg, seeing huge expansions of their wealth, while a half a million people sleep out on the street tonight … Maybe it’s time for the working class in this country to get a little bit of power in Washington, rather than your billionaire campaign,” Sanders said.

Bloomberg hit back, pointing to the fact Sanders owns three homes. Bloomberg also said he has worked very hard to become a billionaire.

He said he’s been very lucky to have “made a lot of money and I’m giving it all away to make this country better, including to the Democratic Party.”

For his part, Trump joined the Bloomberg pile-on from afar.

“I hear he’s getting pounded tonight – you know he’s in a debate,” Trump said. The president was hosting a campaign rally in Arizona.

Wednesday’s fierce exchanges throughout the two-hour debate reflected the rising urgency in a 2020 primary season that is already deep into its voting phase. Nevada votes on Saturday. South Carolina the week after. And more than a dozen states host a series of Super Tuesday contests in less than two weeks.