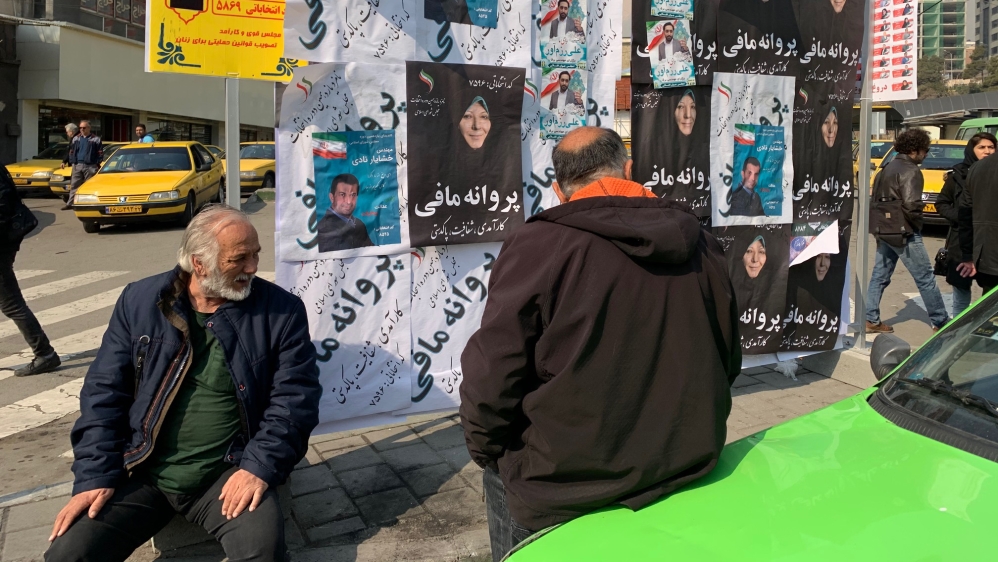 Tehran, Iran - Authorities in Iran have appealed to the country's nearly 58 million eligible voters to turn out for a key parliamentary election on Friday, but many young voters in the capital, Tehran, said they have no intention of taking part in the poll. As the week-long campaign for Iran's 290-member parliament came to…

Tehran, Iran – Authorities in Iran have appealed to the country’s nearly 58 million eligible voters to turn out for a key parliamentary election on Friday, but many young voters in the capital, Tehran, said they have no intention of taking part in the poll.

As the week-long campaign for Iran’s 290-member parliament came to a close on Wednesday, President Hassan Rouhani urged voters to show up for the “important historic day” to “alleviate people’s economic problems and lift sanctions”.

The parliament “is very important for our future”, he said during his weekly address to the cabinet. “To resolve the people’s problems, we must all be together and in doing so, the government and parliament can cooperate with each other.”

The February 21 vote is taking place against a backdrop of a severe economic crisis, marked by high inflation and lack of jobs, as well as heightened tensions with the United States after it pulled out of a landmark nuclear deal and reimposed sanctions against Tehran in 2018. The frictions escalated further in January when the US forces killed top Iranian general Qassem Soleimani in Baghdad.

The poll will determine the direction of the country as it grapples with the fallout from multiple crises, but there are fears of a reduced turnout amid dissatisfaction with the ruling elite as well as the mass disqualification of candidates belonging to the moderate and reformist bloc allied to Rouhani in parliament.

But in Tehran’s Tajrish Square, the mood was one of apathy. People walked by the large campaign posters fixed to metal posts and lamp posts without a second glance. Most of those banners belonged to candidates of the principlist camp, Rouhani’s rivals in parliament.

“I won’t be taking part in the election, because voting [in Iran] is useless,” said Atefeh Ghadimi, a 25-year-old designer of green spaces. “I wished [after the 2016 vote] that parliament would do something for the wellbeing of my countrymen, especially when it comes to the economy and the youth. But nothing has changed.”

The sentiment is widespread. A survey of 14,000 people, carried out by state television on instant messaging app Telegram earlier this month, showed 83 percent participants saying they will boycott the election. Meanwhile, a poll by the semi-official Iranian Student Polling Agency in January found that 44.2 percent of people in Tehran province do not want to vote.

Indeed, all voters Al Jazeera spoke to on Wednesday said the same. In addition to the deteriorating economy, which officials blame on US sanctions, some voters said they would boycott the vote because of a deadly crackdown by security forces on tens of thousands of people protesting against fuel price rise in November. The military’s shooting down of a Ukrainian airliner on January 8 that killed all 176 people on board, mostly Iranians, was another reason cited for the boycott.

“I’m taking a stance for those who were killed in the plane crash and in the protests in November. Those events shook me to the core,” said a 21-year-old computer science student who wished to remain anonymous for fear of reprisal. Sina, a 19-year-old student who gave only one name, said: “I used to be interested in the elections but now I feel apathetic about the whole political process. Both the conservatives and the reformists have fooled us. I can’t trust either side.”

Meanwhile, Mitra Jafari, a 41-year-old activist and student at Allameh Tabatabaei University, said she did not intend to vote because the elections were not competitive. The Guardian Council, which vets candidates, had disqualified more than 7,000 candidates ahead of the vote, most of them from the reformist camp.

“I am boycotting the elections … because they are unipolar, meaning that main candidates from various groups and parties were eliminated by the government. There are no critics that are running. The election has faced a crisis of competition due to the absence of competing candidates,” she said.

However, Abbas Ali Kadkhodaei, a spokesman for the Guardian Council, told reporters on Wednesday that he was hopeful of a good turnout and dismissed the claim the mass disqualifications would have an effect.

“Many factors affect voter participation and we are aware of economic problems people are facing. But we expect a good turnout,” he said. “On average, the turnout in elections so far has been around 50 percent, and that’s the figure we expect this time as well, nationally.”

Hamid Gholamzadeh, the head of the Peace Spirit Foundation, said: “There some concerns that turnout might be less than last time, but turnout in Iran is usually higher than the average across the world.”

Fatima al-Samadi, a senior researcher at the Al Jazeera Center for Studies, said she expected a turnout of 40 percent in the capital, as most of Tehran’s voters tend to support reformist candidates, many of whom have been disqualified this year.

Still, things may change on voting day, she said.

“Iranians tend to decide on the day whether or not they will vote. So many people may actually end up at the ballot boxes.”