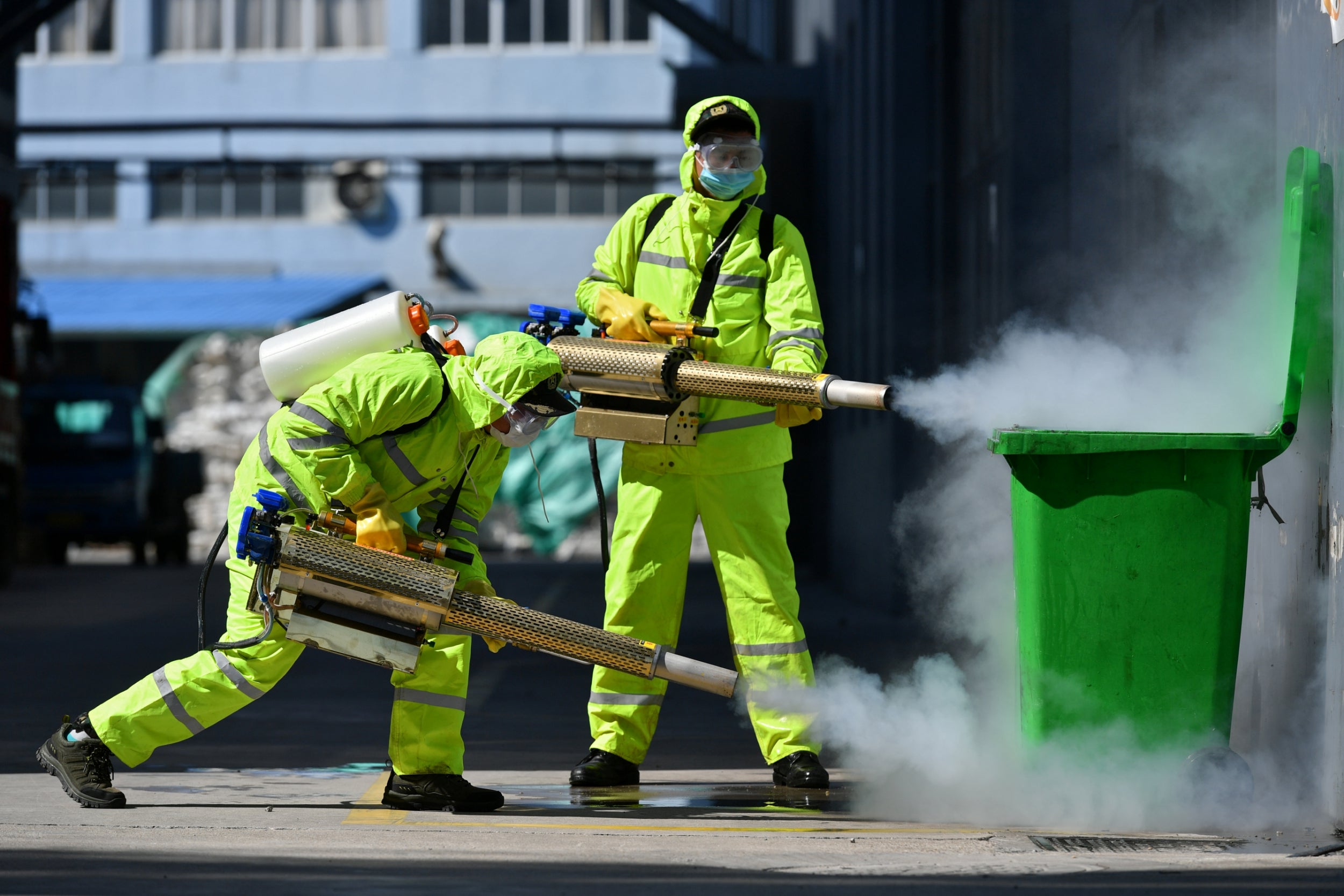 The government is “working to organise” a flight back to the UK for British nationals quarantined on board a cruise ship off the coast of Japan over coronavirus fears. The Foreign and Commonwealth Office (FCO) has been under pressure to fly the 74 Britons on the Diamond Princess home after the US chartered two planes and repatriated…

The government is “working to organise” a flight back to the UK for British nationals quarantined on board a cruise ship off the coast of Japan over coronavirus fears.

The Foreign and Commonwealth Office (FCO) has been under pressure to fly the 74 Britons on the Diamond Princess home after the US chartered two planes and repatriated 340 of its citizens.

Meanwhile, the number of new coronavirus cases in mainland China fell below 2,000 for the first time since January and claimed another 98 lives, among them the head of a leading hospital in China’s central city of Wuhan, the epicentre of the viral outbreak.

Sharing the full story, not just the headlines

The government has announced it is “working to organise” a flight to repatriate British nationals on board a cruise ship quarantined off the coast of Japan.

“Given the conditions on board, we are working to organise a flight back to the UK for British nationals on the Diamond Princess as soon as possible,” a statement from the department said.

“Our staff are contacting British nationals on board to make the necessary arrangements. We urge all those who have not yet responded to get in touch immediately.”

The Foreign and Commonwealth Office (FCO) has been under pressure to fly the 74 Britons on the Diamond Princess home after the US chartered two planes and repatriated 340 of its citizens.

On Monday, Japan’s Health Ministry confirmed 99 more people on board had been diagnosed with the illness, bringing the total to 454.

Four Britons with confirmed coronavirus are currently in hospital in Japan, according to the latest official figures.

Two British passengers aboard a quarantined cruise ship claim to have tested positive for coronavirus.

In a subsequent post, Mr Abel appeared to question the positive findings, saying: “Frankly i think this is a setup! We are NOT being taken to a hospital but a hostel. That’s where partners are sent waiting out there quarantine.

“No phone, no wi-fi and no medical facilities. I really am smelling a very big rat here!”

When asked if he was sure the test was positive, Mr Abel replied: “I doubt it was positive. If it was, we would be in hospital.”

The son of the two British passengers on the quarantined cruise ship who have reportedly tested positive for coronavirus has said his parents are “not getting any communication” from the UK.

Steve Abel, son of Sally and David Abel, who are being held on the Diamond Princess, said: “They are very high-spirited people.”

He added: “There are cracks in the armour and they are getting down.”

Speaking on BBC Breakfast, he said: “My mum breaks down in tears frequently, my dad is short-tempered.

“They are not getting any communication from our country, so they are in the dark and feeling very unloved.”

Steve Abel said the conditions on the quarantined cruise ship were making it difficult for his father, David, to manage his diabetes and that he is also suffering from a tooth infection.

He added he could hear his father vomiting in the bathroom the last time he spoke to his mother on the phone but believed it might be due to “shock” rather than a symptom of the disease.

“The quarantine in Japan has been a failure, that is obvious, so [my parents] are obviously going to have to go through it again,” Mr Abel said.

“I would like them to go through it here where the food is more suitable for my dad.”

But he added: “I’m not actually that worried about the virus – looking at the recovery stats.

“It is more about the stress, the diet.”


When asked about the government’s treatment of his parents, Mr Abel described it as “appalling”. “They haven’t done anything,” he said.

“They aren’t communicating with us, the Foreign Office have my number, my wife’s number, my brother’s number, my sister’s number and they haven’t got back to us on anything and we have been calling them every day for four or five days.”


Here’s some more information on the UK’s plans to evacuate Britons from the quarantined cruises hip, from Rory Sullivan:


Another 88 passengers on board the quarantined Diamond Princess cruise ship have tested positive for the coronavirus, Japan’s Health Ministry has said, according to the country’s national broadcasting organisation.


Head of hospital in coronavirus epicentre dies of disease

The head of a leading hospital in the Chinese city of Wuhan, the epicentre of the coronavirus outbreak, has died of the disease.

Chinese state television said Liu Zhiming, the director of Wuhan Wuchang Hospital, died at 10.30am. He was the seventh health worker to fall victim.

The hospital was designated to solely treat virus-infected patients.


France’s health minister has said there is a “credible risk” the coronavirus outbreak could turn into a pandemic and spread across the world.

“This is both a working assumption and a credible risk,” Olivier Veran told France Info radio.

He said France was ready to deal with all the possibilities and its health system was sufficiently robust and well-equipped.

Four patients who tested positive for the virus remained in hospital in France, he added. An 80-year-old Chinese tourist died from the coronavirus in France last week, the first fatality in Europe.

The Covid-19 disease is far deadlier than the normal flu, a study by the Chinese Center for Disease Control and Prevention has found.

More than 80 per cent of the cases studied were mild, with severe symptoms such as pneumonia occurring in 14 per cent of them and critical illness in 5 per cent.

The fatality rate of 2.3 per cent, which makes it deadlier than the seasonal flu, which typically has a 0.1 per cent mortality rate.


A small number of Irish people are on board the two cruise ships where coronavirus has been detected, the Irish government has said.

Minister Simon Coveney said his Department of Foreign Affairs was in contact with citizens on the Diamond Princess in Japan and the Westerdam off Cambodia.

He told RTE’s Morning Ireland: “It’s a small number though, and we’re dealing with each individual case.

“There is a second cruise ship off Cambodia, we’re working with Irish nationals on both of those ships to make sure they’re safe.

“And if they’re in quarantine, to make sure those conditions are safe.”

The coronavirus outbreak “is not out of control but it is a very dangerous situation,” the UN secretary-general has said.

Antonio Guterres told the Associated Press that “the risks are enormous and we need to be prepared worldwide for that.”


Here are the latest figures on the coronavirus, which has infected more than 73,000 people globally.


Apple has warned of an iPhone shortage due to the coronavirus, Phil Thomas reports. While none of the company’s production plants are in the worst-hit Hubei province, it said its centres were only gradually returning to full production.

HSBC has announced it will cut 35,000 jobs worldwide after its profits fell by a third last year.

The bank said the coronavirus outbreak had caused “significant disruption” for its staff, suppliers and customers, especially on the Chinese mainland and in Hong Kong, Samuel Lovett reports:


British firms must flag up the full extent of the risks posed by the coronavirus outbreak to their businesses in forthcoming annual reports, according to the UK accounting watchdog.

The Financial Reporting Council (FRC) said companies have a duty to make “up-to-date and meaningful” disclosures to investors on the potential impact of the disease, the Press Association reported.

It also confirmed it is in talks with accountancy firms over the potential effect that coronavirus – also known as Covid-19 – could have on their ability to sign off accounts, given travel restrictions in China.

Boris Johnson, the prime minister, has discussed the coronavirus outbreak with Xi Jinping, the president of China.

A Downing Street spokesman said: “The prime minister spoke to President Xi of China this morning.

“He offered his sympathies for those affected by the outbreak of coronavirus in China. President Xi thanked the UK for its support and in particular welcomed the donation of vital medical equipment to China.

“The prime minister and president agreed on the importance of the UK-China relationship and resolved to work together across a range of issues including strengthening the economic partnership, to benefit the people of both China and the UK.

“Ahead of COP26 in Glasgow and the Convention on Biological Diversity Summit in China, the two leaders resolved to work closely together on the issue of climate change. They agreed that biodiversity and climate change are two sides of the same coin and must be addressed in tandem if we’re to protect the planet for future generations.”


In an updated statement, a spokesman for the Foreign and Commonwealth Office said: “We have the utmost concern for the British people currently on the cruise ship.

“We are ensuring those who have been diagnosed with coronavirus receive the best possible care in Japan and are organising a flight back to the UK for other British nationals on the Diamond Princess as soon as possible.”


Germany is sending a second shipment of medical aid supplies to China to help the Asian giant fight the coronavirus epidemic that has infected over 73,000 people.

The country’s foreign minister, Heiko Maas, said the government was sending 8.7 tons of aid supplies worth €150,000 (£124,000), including protection gear and disinfectants.

“Germany stands firmly on the side of China in the battle against coronavirus and works closely and trustfully with the Chinese officials,” Mr Maas said. “We have the utmost respect for the efforts China has already undertaken.”