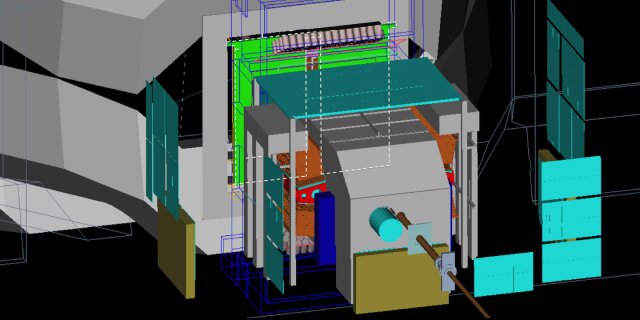 Illustration of the MoEDAL detector system (gold and light blue components), surrounding the LHCb experiment’s VELO detector (central grey structure). Credit: CERN A magnetic monopole is a theoretical particle with a magnetic charge. Give it an electric charge, and you get another theoretical beast, dubbed a dyon. Many "grand unified theories" of particle physics, which…

A magnetic monopole is a theoretical particle with a magnetic charge. Give it an electric charge, and you get another theoretical beast, dubbed a dyon. Many “grand unified theories” of particle physics, which connect fundamental forces at high energies into a single force, predict the existence of dyons, but no experiments at particle accelerators have so far searched for these hybrid particles—until now. The MoEDAL collaboration at CERN, which was designed to search for magnetic monopoles, has just scored two firsts with the first search for dyons at the Large Hadron Collider (LHC) and, more generally, at any particle accelerator.

The collaboration conducted the search using the experiment’s second subdetector system, which consists of about 2400 aluminum bars with a total mass of 794 kg. The bars were exposed to proton–proton collisions produced at the LHC at an energy of 13 TeV between 2015 and 2017. A special device was then used to scan the bars and look for the presence of trapped magnetic charge belonging to dyons.

This scanning procedure found no signs of dyons. However, assuming that the dyons would be produced in the collisions as pairs emerging from a photon, the negative result allowed the MoEDAL team to narrow the region of where to search for dyons. The researchers ruled out the existence of dyons that carry a magnetic charge ranging up to six units of a fundamental magnetic charge (the Dirac charge) and an electric charge up to 200 times the electron’s charge—for dyons with a mass between 830 and 3180 GeV.

Commenting on the results, MoEDAL spokesperson James Pinfold said: “Nobel-prize winner Julian Schwinger first hypothesized the dyon in 1969. He used it to build what he called a magnetic model of matter. Amazingly, he used this model to successfully predict the existence of the J/Psi particle before its discovery in 1974. Today, dyons are predicted by many particle-physics theories. Naturally, I was surprised that, before MoEDAL, no explicit experimental search for this exciting entity at an accelerator had ever been performed.”

The collaboration is now preparing to continue its searches for monopoles and dyons, as well as other exotic particles, during the next LHC run, which starts in 2021. “We’re planning to expand our experimental sensitivity to other avatars of new physics phenomena, including fractionally charged particles with charge as low as one thousandth the electric charge and very long-lived weakly interacting neutral particles. We expect the next run to be a very exciting one,” Pinfold concludes.