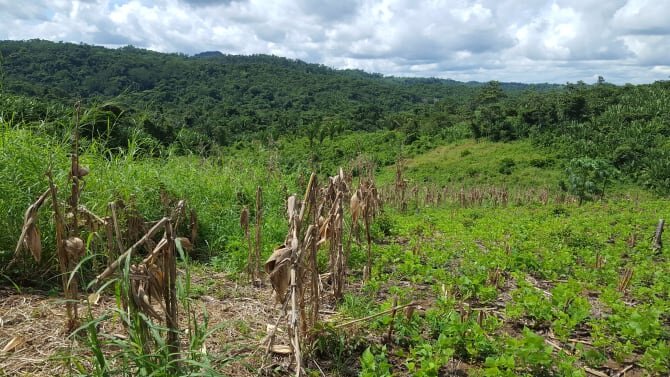 Rows of corn and a landscape of the rainforest, Belize. Credit: Raquel Chun A tropical rainfall belt providing critical summer rains to billions of people is at risk of shrinking due to future climate warming, according to new research. The resulting droughts could lead to social unrest and mass migration from affected regions, including Central…

A tropical rainfall belt providing critical summer rains to billions of people is at risk of shrinking due to future climate warming, according to new research.

The resulting droughts could lead to social unrest and mass migration from affected regions, including Central America and sub-Saharan Africa.

This stark warning comes from an international team of scientists who looked at past rainfall patterns within the Intertropical Convergence Zone (ITCZ), a critical rainfall belt found near the equator.

Seasonal shifts in the ITCZ’s location control the beginning and length of the tropical rainy season, and in turn, the agricultural growing season.

The researchers reconstructed 1,600 years of rainfall using a stalagmite recovered from a cave in Belize, Central America, and compared this with existing rainfall data from other locations.

The research was led by the University of New Mexico (UNM), U.S., with scientists from Northumbria University and Durham University in the UK also part of the international team involved in the project.

The researchers showed that the ITCZ expands in a cooler climate and contracts or shrinks as temperatures increase.

As a result, areas of the northern tropics, like Central America, could experience drier conditions, leading to crop failure and possible famine. Belize is currently in a state of drought, and the research suggests that future warming will increase the likelihood and frequency of future droughts.

The findings have been published in the journal Science Advances.

Previous work suggested two models of how the ITCZ might respond to climate change: one, based on limited data, suggesting that the rain belt would shift northwards during warmer periods, and a second, based on modeling, suggesting these areas would become drier as the world becomes warmer.

These new findings support the argument that the rain belt contracts in response to warming, confirming the second model, which could mean drier conditions for countries found at the edge of the ITCZ worldwide as global temperatures rise.

Dr. Sebastian Breitenbach, of Northumbria University’s Department of Geography and Environmental Sciences, has been carrying out research in this area for the last decade. As a paleoclimatologist he uses carbonate chemistry and stable isotope geochemistry as tools to reconstruct past environmental and climate conditions.

He is a co-author on this latest study and has been involved in collecting and analyzing samples from Belize, along with fellow co-author Professor James Baldini, of the Department of Earth Sciences, Durham University.

“Previous records lacking this precision led to the assumption that the Central American climate was fundamentally like today’s climate over the last 2,000 years. This new record shows that this simply wasn’t the case, and that summer rains did not extend as far to the north as they do now for long intervals of the last two millennia.

“Our conclusions have major implications for the future. We now know that a wet season has only characterized the region over the past 500 years or so. Furthermore, unfortunately our results suggest that this phase of abundant summer rain may be coming to an end.

“This is a staggeringly worrying result, and it is likely that large populations in the tropics will be affected by drought in the future.”

Lead author Professor Yemane Asmerom, of the University of New Mexico, said: “What we found was that during past warm intervals, southern Belize was very dry, similar to modern central Mexico. In contrast, cooler intervals, when it should have been dry by the standard old model, were the wettest intervals over the last 2,000 years.

“Our results are consistent with models suggesting ITCZ expansion and weakening during global periods of cold climate, and contraction and intensifying during periods of global warmth.”

Co-author and UNM Professor of Anthropology Keith Prufer, an environmental archaeologist who has been conducting research in Belize for 25 years, said: “In the last five years there have been mass migrations of people in Guatemala and Honduras—partially driven by political instability, but also driven by drought-related conditions and changes in seasonality.

“This is creating enormous problems for agricultural production and feeding a growing population. Our new research adds to the increasing evidence that these changes are a direct consequence of climate change.”

Speaking about where the researchers will focus their attention next, Dr. Sebastian Breitenbach, of Northumbria, added: “What seems a logical next step is to test how this expansion-contraction mechanism is linked to other major climate systems, like the Asian-Australian monsoon. There are lots of questions to be answered.”