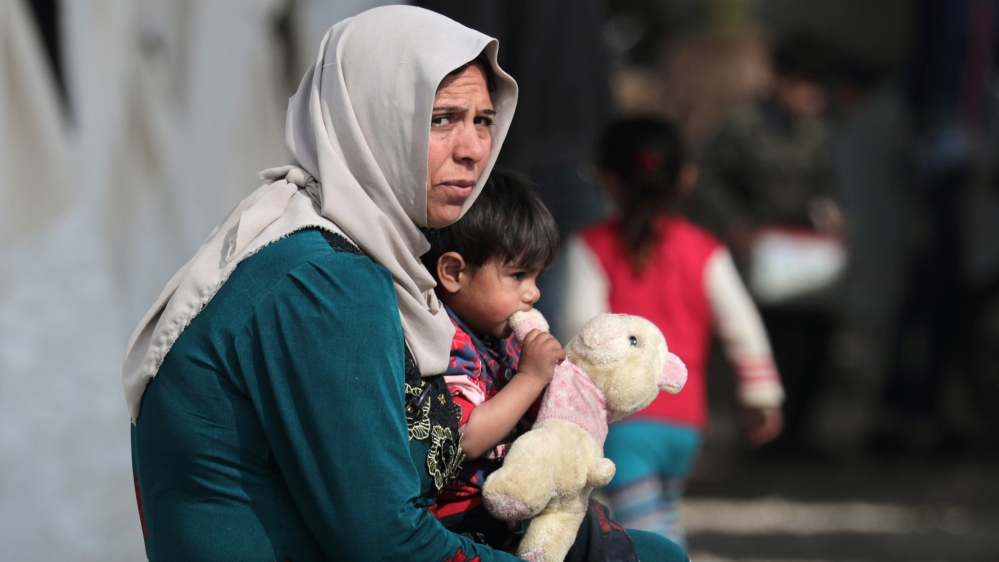 Russia must halt its support for the Syrian government's "atrocities", US President Donald Trump said, as fighting rages in the country's dwindling rebel-held areas. In a statement released by the White House on Sunday, Deputy Press Secretary Judd Deere said Trump - in a phone call with Turkish President Recep Tayyip Erdogan - "conveyed the United States's desire…

Russia must halt its support for the Syrian government’s “atrocities”, US President Donald Trump said, as fighting rages in the country’s dwindling rebel-held areas.

In a statement released by the White House on Sunday, Deputy Press Secretary Judd Deere said Trump – in a phone call with Turkish President Recep Tayyip Erdogan – “conveyed the United States’s desire to see an end to Russia’s support for the Assad government’s atrocities and for a political resolution to the Syrian conflict”.

“Trump expressed concern [yesterday] over the violence in Idlib, Syria and thanked Erdogan for Turkey’s efforts to prevent a humanitarian catastrophe,” Deere said.

Syria’s military announced on Monday its troops regained control of territories in northwestern Syria “in record time”, vowing to continue to chase armed groups “wherever they are”.

The announcement came hours after troops consolidated the government’s hold over the key Aleppo province, capturing over 30 villages and hamlets in the western countryside in one day and securing the provincial capital that had for years remained within range of opposition fire.

The new advances, along with securing a key highway that ran through rebel territory, are set to facilitate movement between northern and southern Syria, including the city of Aleppo, Syria’s commercial centre before the war.

The Shaam Network, an opposition media platform, said the advances cut the rebels’ supply line, effectively driving them out of the area.

The developments sparked late-night celebrations in the city, with state media showing images of residents waving flags and dancing in streets packed with vehicles.

Turkey’s foreign minister, meanwhile, pressed his Russian counterpart over the attacks by Damascus on the last rebel-held bastion in the country.

Backed by Russian air power, Syrian President Bashar al-Assad’s forces made significant gains Sunday as they intensified the assault on the holdout northwestern province of Idlib.

Turkey has 12 observation posts in Idlib as part of a 2018 deal reached between Ankara and Moscow to prevent a government offensive, but al-Assad’s forces have pressed ahead regardless.

Four of the Turkish posts are believed to be encircled by Syrian forces and Ankara has threatened to attack Damascus if they do not retreat by the end of February.

“I stressed that the attacks in Idlib must stop and it was necessary to establish a lasting ceasefire that would not be violated,” Turkish Foreign Minister Mevlut Cavusoglu told journalists at the Munich Security Conference, after he met with Russian Foreign Minister Sergey Lavrov.

Turkey, a supporter of the Syrian opposition, and Damascus ally Russia have worked closely on Syria in recent years despite being on opposing sides of the nine-year conflict.

A Turkish delegation will head to Moscow on Monday after Russian officials visited Ankara last weekend but failed to reach a concrete deal.

War monitor the Syrian Observatory for Human Rights (SOHR) on Sunday said government forces “were in control of all the villages and small towns around Aleppo for the first time since 2012”.

Government forces have for weeks been making gains in northwest Syria and chipping away at territory held by armed opposition fighters, focusing their latest operations on the west of Aleppo province.

The Russian-backed offensive has triggered the largest wave of displacement in Syria’s civil war, with 800,000 people fleeing since it began in December, the United Nations has said.

Backed by Russia, Iran and the Lebanese Shia movement Hezbollah, al-Assad’s forces now control more than 70 percent of Syria and the president has repeatedly promised to retake the entire country.

In the Saturday phone call with Erdogan, Trump also “reiterated that continued foreign interference in Libya would only serve to worsen the situation”.

Libya has been mired in chaos since a 2011 NATO-backed uprising killed longtime leader Muammar Gaddafi, with two rival administrations vying for power.

Countries including Russia, France, the United Arab Emirates (UAE), and Egypt support renegade commander Khalifa Haftar, while the UN-recognised Government of National Accord (GNA) is backed by Turkey and Qatar.