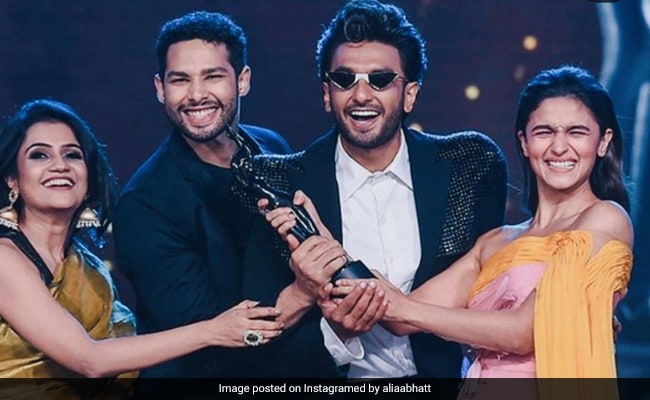 Alia, Ranveer and Siddhant at the Filmfare Awards. (courtesy: aliaabhatt)

Team Gully Boy had a great time at this year’s Filmfare Awards, held in Guwahati on Saturday night. The Zoya Akhtar-directed film garnered all the big awards (more on that later). This is the story of how Alia Bhatt, Ranveer Singh, Siddhant Chaturvedi and Amruta Subhash celebrated their big win. Alia posted a video on her Instagram profile, in which, she and her co-stars Ranveer and Siddhant can be seen singing Apna Time Aayega as they pose with their respective Filmfare trophies. Alia captioned the post: “A humble bunch! Drops mic, walks away.” The post was later shared by Ranveer Singh on his Instagram profile.

Keeping the Filmfare Awards victory aside, Gully Boy emerged as a hit at the Indian box office. The film performed well in the international arena as well. It received the Promotion of Asian Cinema (NETPAC) Award at the 23rd Bucheon International Fantastic Film Festival (BIFAN) in South Korea. It also won the Best Film Award at Indian Film Festival of Melbourne (IIFM). The film also premiered at the Berlin Film Festival, last year.

Co-produced by Ritesh Sidhwani and Farhan Akhtar, Gully Boy traces the scenario of home-grown rap explored through the struggles and triumphs of its protagonist Murad, played by Ranveer Singh. The film showcases Murad’s journey from the slums of Dharavi to the centre stage of rap.