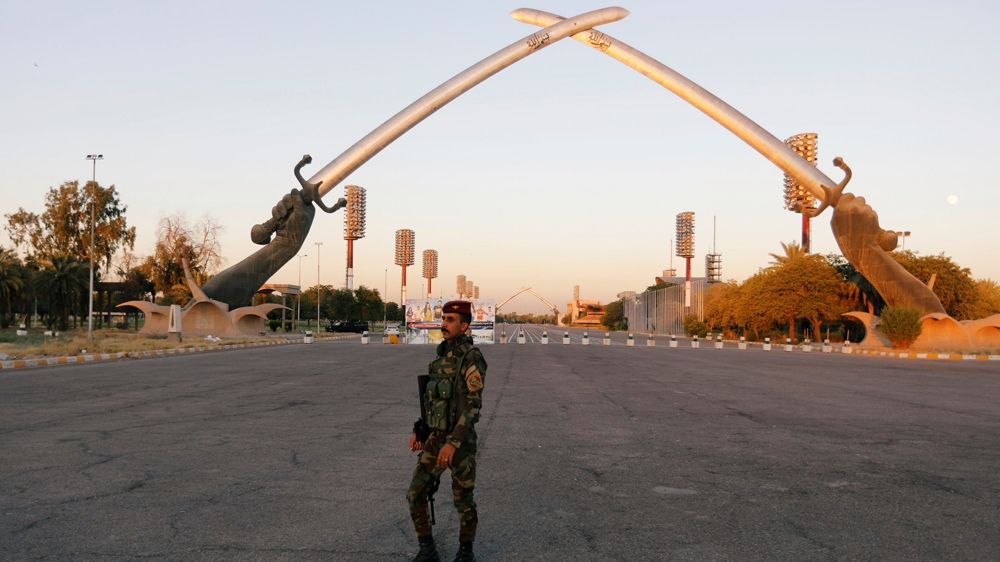 An Iraqi security officer walks near the 'Arch of Victory' memorial in the Green Zone [File: Khalid Al-Mousily/Reuters] Several rockets landed near the embassy of the United States in Iraq's capital early on Sunday, US and Iraqi military officials said, in the latest of a series of attacks against US assets in the country. The rockets…

Several rockets landed near the embassy of the United States in Iraq’s capital early on Sunday, US and Iraqi military officials said, in the latest of a series of attacks against US assets in the country.

The rockets struck an Iraqi base hosting US troops and other coalition forces in Baghdad’s heavily fortified Green Zone, an area that is home to foreign embassies and government offices.

According to Colonel Myles B Caggins III, a spokesman for the US military operation in Iraq, the attack – which took place just before 3:30am (00:30 GMT) – caused no casualties and only minor damage.

There was no immediate claim of responsibility for the attack.

Iraq’s military said three Katyusha rockets landed inside the Green Zone, while a fourth hit a different neighbourhood, striking a logistics base operated by the Hashd al-Shaabi, or Popular Mobilisation Forces, a military network officially incorporated into the Iraqi state.

Rocket attacks, which the US blames on Iran-backed militias within the Hashd al-Shaabi, have frequently landed near and sometimes on the US embassy, which is next to the base.

Sunday’s attack came just hours after one of the Hashd’s Iran-backed factions, Harakat al-Nujaba, announced a “countdown” to ejecting American forces from the country.

The faction’s leader Akram al-Kaabi tweeted a photograph of what he claimed was an American military vehicle, adding: “We are closer than you think.”

The attack was the latest in a recent series of rocket and mortar attacks on Iraqi bases housing US troops. On Thursday, a mortar shell exploded in the K1 Iraqi military airbase in Kirkuk province in northern Iraq. No casualties were reported, Iraqi security officials said.

Last month, the Iraqi parliament passed a resolution calling for an end to the presence of foreign troops linked to the US-led alliance fighting the ISIL (ISIS) group in the country. There are currently approximately 5,000 US troops stationed in Iraq.

The resolution came after a US drone attack in Baghdad killed top Iranian commander, General Qassem Soleimani; it later prompted Iranian missile attacks against Iraqi military bases housing US personnel. Dozens of US military personnel were wounded in the attacks.