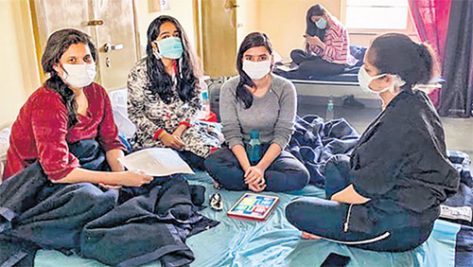 By AuthorM. Sai Gopal  |  Published: 17th Feb 2020  12:00 amUpdated: 17th Feb 2020  12:10 amHyderabad: Almost a month into the massive surveillance to screen and identify persons with COVID-19, public health officials across the State and elsewhere are hoping that the disease might just imitate SARS and MERS outbreaks and spare the country from a possible medical emergency.…

Hyderabad: Almost a month into the massive surveillance to screen and identify persons with COVID-19, public health officials across the State and elsewhere are hoping that the disease might just imitate SARS and MERS outbreaks and spare the country from a possible medical emergency.

Both Severe Acute Respiratory Syndrome (SARS) and Middle-East Respiratory Syndrome (MERS), had rapidly spread across the world from countries of their origin (i.e China and Middle East respectively) but largely remained out of India. While this parallel gives a lot of hope, the World Health Organisation (WHO) Scientific and Technical Advisory Group of Infectious Hazards (STAG-IH), however, has concluded that there is similarity and at the same time difference between SARS and COVID-19.

The WHO’s STAG-IH, which has published a paper ‘COVID-19: What is next for public health?’ in The Lancet journal on February 13, concluded that ‘the continuing strategy of containment for elimination should continue, and that the coming 2 to 3 weeks through to the end of February, 2020, will be crucial to monitor the situation of community transmission of 2019-nCoV’.


According to the STAG-IH, the ‘genetic analysis early in the outbreak of COVID-19 in China revealed that the virus was similar to, but distinct from, Severe Acute Respiratory Syndrome Coronavirus (SARS-CoV), but the closest genetic similarity was found in a coronavirus that had been isolated from bats’.

What COVID-19 does to individuals?


According to WHO, the COVID-19 replicates efficiently in the upper respiratory tract (nose, nasal passages, sinuses and part of larynx) and appears to cause less abrupt onset of symptoms like cold in the winter season. During early signs and symptoms of the ailment, the COVID-19 positive individuals are producing large quantity of virus in the upper respiratory tract. This is the stage where individuals are mobile and carry on with their usual activities, which contributes to the spread of the infection.

What SARS does to individuals?


The patients infected with SARS-CoV did not transmit the virus during the initial stages of their symptoms when they were mildly ill. Most of the transmission of SARS-CoV occurred when infected persons has severe illness.

What does it mean?


This difference, according to the WHO’s STEM-IH means that ‘it was easy to contain the outbreaks caused by SARS-CoV unlike the current outbreaks due to COVID-19’


Quite eerily, like COVID-19, the number of SARS cases that were reported in India during its outbreak in 2003 was just three. Like COVID-19, the SARS is also caused by a coronavirus and it was first recognised in February 2003 in Guangdong province of China. The SARS virus travelled in humans to 30 countries and to date 8439 people had tested positive with the ailment and 812 died.


Like COVID-19, the Middle East Respiratory Syndrome (MERS) is also a viral respiratory disease caused by a novel coronavirus also known as MERS-CoV that was first identified in Saudi Arabia in 2012.

The MERS spread to nearly 27 countries across the world and infected close to 2,500 persons in its wake and claimed 858 lives. Like COVID-19 and SARS, the MERS coronavirus is also zoonotic in nature, which means the virus was transmitted from animals to humans.

According to studies, the MERS was transmitted to humans through camels (dromedaries) in several countries in the Middle East, Africa and South Asia. According to WHO, the origins of the MERS virus are not fully understood but, according to analysis of different virus genomes, it is believed that it may have originated in bats and transmitted to camels.

3 major patterns spotted by WHO among COVID-19 patients

4. In the last stage, COVID-19 begins with mild symptoms for 7 to 8 days and then progress to rapid deterioration and ARDS

What is the fatality Rate of COVID 19?

SARS had a fatality rate of 10 per cent while swine flu is 1 per cent to 4 per cent.

What is intensity of COVID-19?


At present, COVID-19 is mild and self-limiting among most people who are infected. Elderly persons with comorbid conditions like diabetes pulmonary disease and other chronic ailments are facing severe COVID-19


Rumours and fake news have the potential to cause chaos during public health emergencies like the one being experienced due to COVID-19 outbreak. While the entire public health community in Hyderabad is working to contain 2019-nCoV, bogus information about outbreak tends to go viral. Officials here have urged people not to believe misinformation and only rely in reputed organisations like WHO and MOHFW, New Delhi

No positive cases in Telangana

Health officials on Sunday said that so far 92 samples from passengers with a travel history to China were collected out of which all have tested negative and have been discharged from the hospitals. During discharge from the hospital, all the passengers underwent counselling and also are in home isolation.

Since the thermal screening for passengers at Shamshabad international airport was launched, the health officials have screened 9684 travellers and have asked 220 passengers to remain in home quarantine for 28 days. At present, there are another 3 passengers who are admitted to Gandhi Hospital and are under observation.

The health status of the suspects who are under observation at home and hospitals are stable. As on date, none of the 2019-nCoV suspects have been found positive in Telangana.

Now you can get handpicked stories from Telangana Today on WhatsApp / Telegram everyday. Click these links to subscribe and save this number 9182563636 on your contacts.