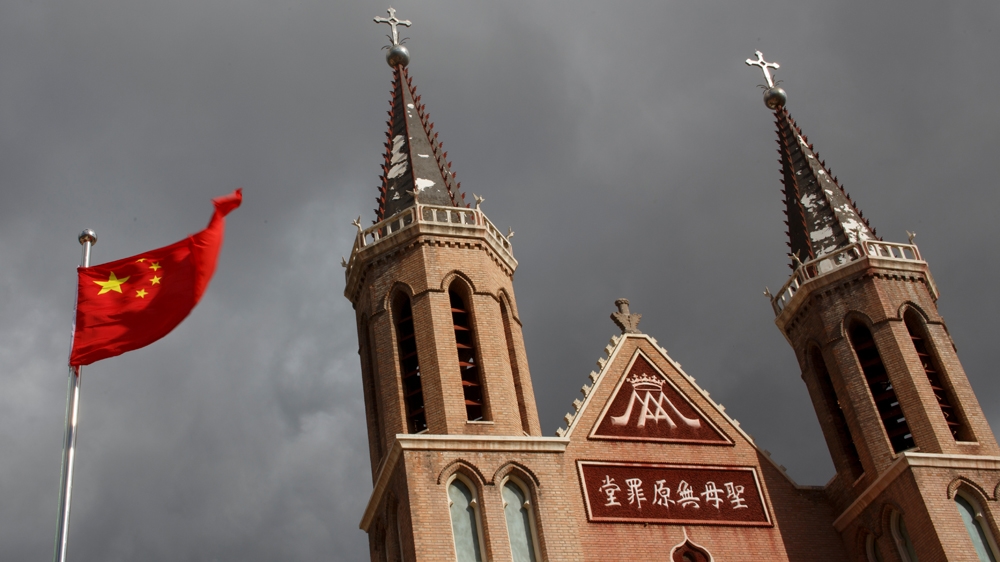 The Chinese national flag flies in front of an underground Catholic church in the village of Huangtugang, Hebei province, China [File: Thomas Peter/Reuters] The foreign ministers of the Vatican and China have met on Friday in what is believed to be the highest-level official encounter between the two sides in decades. The meeting between Archbishop…

The foreign ministers of the Vatican and China have met on Friday in what is believed to be the highest-level official encounter between the two sides in decades.

The meeting between Archbishop Paul Gallagher and Wang Yi, previously unthinkable, took place on the sidelines of the Munich Security Conference. The Vatican and China have not had diplomatic relations since the 1950s.

“Today is the first meeting between the Chinese and Vatican foreign ministers,” Wang said, according to the People’s Daily newspaper.

They discussed the landmark September 2018 deal between Rome and Beijing, which gave the Vatican final say on the appointment of bishops, a matter that had long been contentious, a Vatican statement said.

It added that the two sides agreed to continue “institutional, bi-lateral dialogue” aimed at benefitting the Catholic Church and the Chinese people.

The People’s Republic of China broke off relations with the Vatican in 1951.

China’s roughly 12 million Catholics have for decades been split between a government-run association, whose clergy were chosen by the atheist Communist Party, and an unofficial underground church loyal to the Vatican.

Relations between the Vatican and Beijing have improved since the 2018 deal.

However, some Catholics objected to the pact, accusing the Vatican of having sold out to the communist government.

The deal’s most outspoken critic has been Cardinal Joseph Zen, the former archbishop of Hong Kong. The Vatican says not pursuing a deal would have risked a schism.

Friday’s meeting was the latest in a series of signs of improving relations in recent weeks.

Last month, the pope praised what he called China’s “great commitment” to contain the coronavirus outbreak and later the Vatican’s charity arm sent hundreds of thousands of medical masks to China as a gesture of goodwill.

Many see the 2018 deal on the naming of bishops as a precursor to re-establishing diplomatic relations between the Vatican and Beijing after a rupture of nearly 70 years.

If they resume full relations, the Vatican would have to sever relations with Taiwan, which Beijing considers a wayward province. The Vatican is the only state in Europe to still recognise Taipei.