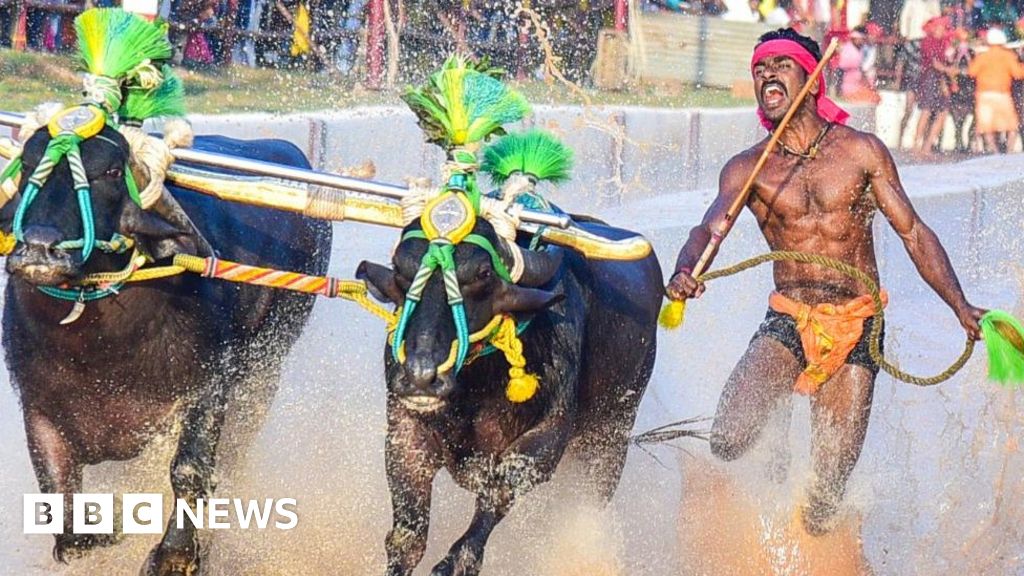 Image copyright Annu Pai Image caption Srinivas Gowda also praised the efforts of his teammates, the two buffalo A construction worker in south India is being compared to the Olympic gold medallist sprinter Usain Bolt after a record-breaking win in a buffalo race.Srinivas Gowda, 28, was competing in Kambala, a sport from the southern state…

A construction worker in south India is being compared to the Olympic gold medallist sprinter Usain Bolt after a record-breaking win in a buffalo race.

Srinivas Gowda, 28, was competing in Kambala, a sport from the southern state of Karnataka where people sprint 142m through paddy fields with buffalo.

But the governing body for Kambala has warned against comparing him to Bolt.

“We would not like to indulge in any comparison with others,” Prof K Gunapala Kadamba, president of the Kambala Academy, told BBC Hindi.

But Mr Gowda, from Moodabidri in Karnataka’s coastal district of Dakshina Kannada, was excited about his record-breaking win and praised his teammates – the two buffalo he ran alongside – for doing so well.

He told BBC Hindi he had taken part in Kambala for seven years, adding: “I got interested in it because I used to watch Kambala during my school days.”

Kambala, which roughly translates to “paddy-growing mud field” in the local language Tulu, is a traditional sport originating from part of Karnataka’s coast.

Participants sprint through a field, which is normally either 132m or 142m, with two buffalo that are tethered together.

It is controversial, and in the past the sport has attracted strong criticism from international animal rights groups.

In 2014, India’s Supreme Court issued a ban on races with bulls, prompted primarily by campaigns against the practice of Jallikattu, a form of bull-fighting from the neighbouring state of Tamil Nadu.

Prof Kadamba said that the organising body had responded to this, updating the sport in order to make it more humane.

He said their current and former students – including Mr Gowda – are now taught how to deal with buffalo “in a humane manner without unnecessarily hurting the animal”.

In 2018, the state started allowing Kambala races to take part again, but issued several conditions – including a ban on the use of whips.

But the practice is still under threat. International animal rights group Peta has a petition pending in the Supreme Court, arguing that Karnataka’s reinstatement of Kambala was illegal.

“This Kambala is quite different from the traditional Kambala that used to be practised some decades ago,” Prof Kadamba added.